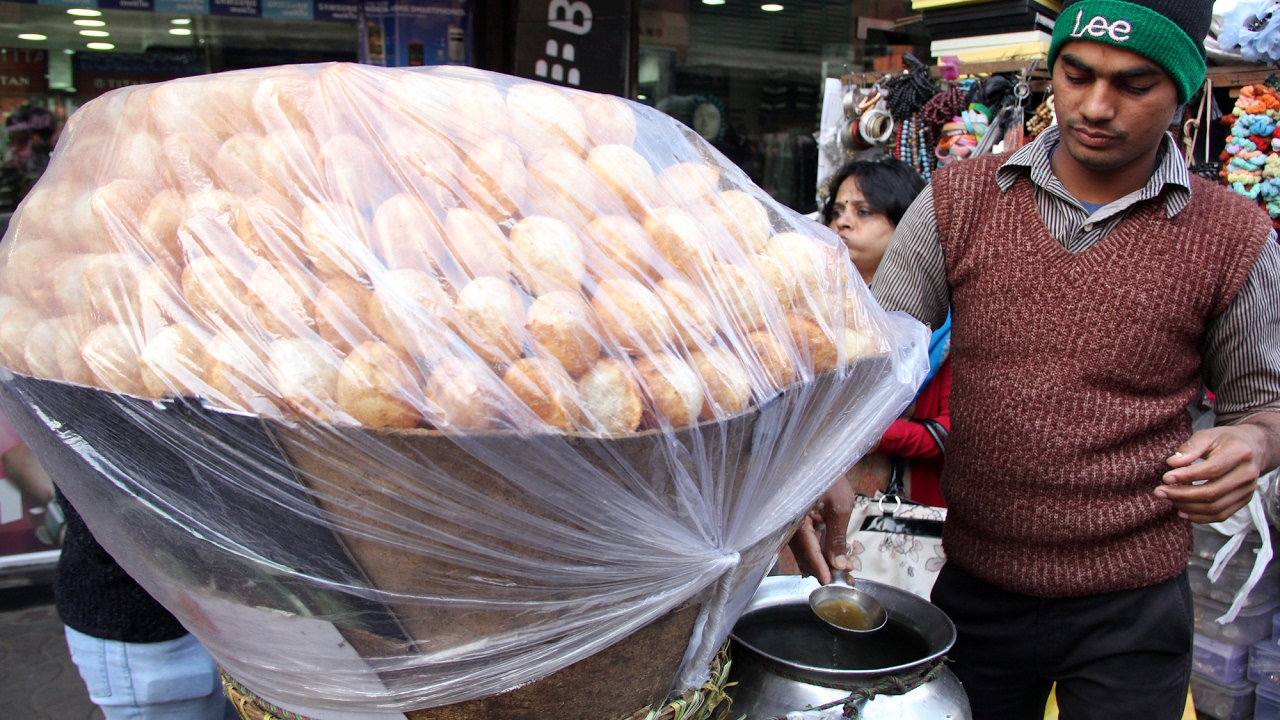 There are few Indian street foods more intriguing, tempting, and as popular as something known as pani puri. In Kolkata, they are known as puchka and in other parts of India they are referred to as golgappa, but they are all quite similar, and the most common name is just pani puri. These snacks are widely available in India, Pakistan, and Nepal. Puri is the world for a deep fried piece of dough, which in this case is a little hollow ball about the size of a golf ball. It’s crispy like a chip. Pani is the Hindi word for water, so both together make up chips and water.

Pani puri is available all over India, but in this Indian street food video, I’m on the streets of Kolkata for my first taste of a pani puri. As soon as I rolled up, the vendor first handed me a small bowl that was made from a leaf. The bowl was tiny, only able to hold a single pani puri at a single time. It was time to begin round one. The vendor began by grabbing a puri from his big stockpile, an entire tower of puris, and he then poked a hole in it with his thumb. He then added some masala spiced potatoes, a few spices and finally dipped into a bucket of water. Now it’s not just plain water that fills the puris, in this case it was tamarind infused water including extra spices, onions, and cilantro. So after the pani puri (puchka) was completely assembled, the vendor then handed it to me by placing it in the small leaf bowl. Huddled around the vendor, I grabbed the puri, and plopped the entire combination of ingredients into my mouth in a single bite. You have to take a single bite, of the ingredients will all spill out. What greeted my mouth was an extremely delicious burst of crunchy was transformed into a flavorful gush of the spicy tamarind water. It was a culinary sensation like I’d never had before, a contrast of flavors and textures that really went well together. As soon as I had chewed down my first pani puri, the vendor was immediately ready with another fresh one, and placed it into my bowl again. It’s important to eat pani puri one at a time so they don’t get soggy from the water. I ate a round of five, though I wanted to stand there indefinitely and eat more and more.

I mentioned above, pani puri is a favorite Indian street food, and it’s available all over the country. There are a number of different variations and alterations of the snack, but the ones in Kolkata are normally filled with tamarind water that’s salty and sour. If you are in Kolkata, be sure to take a wander around the New Market where you’ll find all kinds of chaotic action including a ton of delicious street food.

Chic Opulence Emanates from Edinburghâs Prestonfield House
As Restaurants Close For Indoor Dining, 4 Ways They Are Staying Afloat
Beachfront beauties and mountainside retreats: The best spa hotels in Sri Lanka
UK cuts its quarantine policy to five days — but there’s a catch
The Best Gifts For The At-Home Mixologist