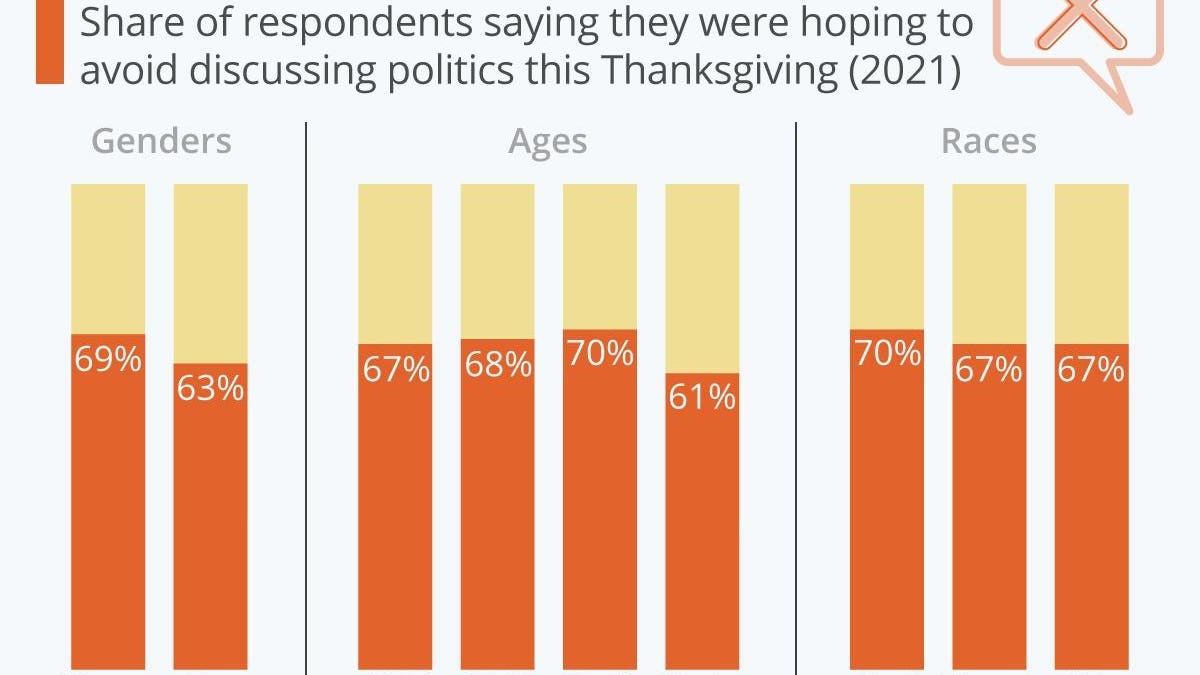 This Thanksgiving, Americans of all ages, races and different genders are united in one feat: to avoid discussing politics with their family and friends at holiday gatherings. According to a poll by Quinnipiac University, the hope to steer clear of the topic was consistently high at around 60% to 70% across all types of population groups.

In a rare showing of unity, Democrats and Republicans were just a couple of percentage points apart, with 68% of Republicans and 66% of Democrats saying they would prefer topics other than politics around the Thanksgiving table.

For parameters other than political affiliation, discrepancies between groups were sometimes larger despite the general aversion. Some of the biggest distastes for political Thanksgiving talk were detected among Black Americans, women and those 50 to 64 years old. Men were six percentage points less likely to avoid talking politics during the holiday than women, while those 65 years and older were two to nine percentage points less prone to skirt the issue than other age groups.

The group most likely to say they looked forward to political discussions at Thanksgiving were white men at 26% percent giving this answer, followed by college-educated white people at 25%. Some of the lowest rates of anticipation were found in Black Americans (17% looking forward), those 18 to 34 years old (18%) and women overall (19%). Other answers included “neither”, “don’t know” and “not visiting family/friends.”

The survey also showed that around a quarter of Americans assumed that it was “very likely” or “somewhat likely” that a heated political debate among their family or friends would occur this Thanksgiving. The poll included 1,378 U.S. adults who were surveyed between November 11 and November 15, 2021.