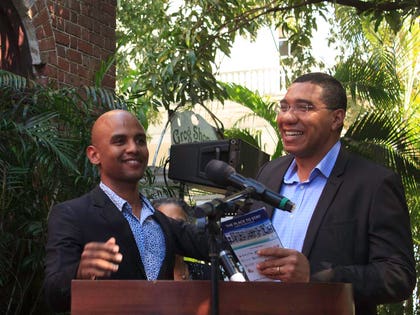 Jamaican entrepreneur, Kirk-Anthony Hamilton is well-known for creating signature event platforms that position the Caribbean as a world-class region for borderless and boundless business experiences. Although not specifically stated, his team’s ultimate objective is to not just sell events, but to repackage the image of their regional host countries.

“The only area in which the Caribbean has successfully packaged itself has been in tourism,” explains Hamilton, adamant that public perception around the region has been the most significant factor detracting from cross border innovation and collaboration.

To date, the team of Kirk-Anthony Hamilton, his sister Michele-Anne Hamilton, Dr. David Walcott and Kyle Maloney have produced close to thirty high level conferences across the Caribbean and North America, attracting names such as Jack Dorsey, Founder and CEO of Twitter and Square, Lloyd Carney, former CEO of Brocade, Wes Edens, Co-Founder and Chairman of Fortress Investment Group (A $70 billion investment firm which was bought by Softbank) and New Fortress Energy (which has pumped over $1 billion into Jamaica’s energy sector), Michael Lee Chin, Chairman and CEO of Portland Holdings Inc. (a Jamaican and currently the 20thrichest man in Canada), Ann-Marie Campbell, Executive Vice President, Home Depot Inc. (a Jamaican and one of the 25 Most Powerful Women in Business in the World, according to Fortune Magazine), Peter Blair Henry, Dean Emiritus at NYU’s Stern School of Business (a Jamaican who sits on the boards of Citigroup and Nike), Jamaica’s Prime Minister, the Honourable Andrew Holness and Barbados’ Prime Minister, the Honourable Mia Mottley, among many others.

Internet entrepreneur, Jeff Pulver, best known for founding companies such as Vonage and Zula, is one of the regulars on Hamilton’s events circuit.

“I am grateful to know Kirk-Anthony and to be invited to speak at his events,” says Pulver. “I appreciate his unbound passion for making a difference. By creating and curating conferences that bring together a dynamic community represented by the global start-up ecosystem, Kirk and his team are helping to effect positive change and help accelerate start-up culture across the Caribbean.”

Kirk-Anthony and his team have also partnered with corporate powerhouses such as Google, which will be sponsoring Tech Beach Retreat in December, the New York Times, Dropbox and Linkedin, among others.

The depiction of Destination Experience Visionaries’ Summit and Tech Beach Retreat as high calibre meeting grounds where meaningful partnerships can be forged between the best minds in the Caribbean and the rest of the world, rather than the customary “working vacations in paradise”, is a major paradigm shift for the region.

I recently had the privilege to sit down and “pick the brain” of the Caribbean game changer.

Daphne Ewing-Chow: What is the global perception of the Caribbean from a business perspective?

Kirk-Anthony Hamilton: The Caribbean has become an increasingly misunderstood and misrepresented territory. We are viewed in two extremes: Small, Poor and Desolate or Sun Sand and Sea. What is even more tragic is that we have effectively bought into the narrative that we are small, we are corrupt and we don’t offer enough scale to make meaningful sense to global business. Most people do not think of the Caribbean when they consider business ecosystems or overall investment opportunities. The time has come for us to reframe our image and retell our story. What we are trying to do, essentially, is to demystify the region.

Daphne Ewing-Chow: How are your events achieving this demystification of the Caribbean?

Kirk-Anthony Hamilton: Our events bring together like-minded individuals from around the world who are equally interested in reinventing the region and want to play a significant role in this movement. These are usually rock stars in their own fields— more sophisticated business people who just “get it”. The result is a cross-pollination that is literally beautiful; an open forum in which, despite the amount of pedigree represented, there are no hierarchies or VIPs. We’ve created platforms that showcase global innovation from a place that has not in recent times been associated with this term. We are also delivering a well-placed opportunity to elevate Caribbean leadership and profile the untold success stories of our region including members of the diaspora.

Daphne Ewing-Chow: What role do you think that the grouping of Latin America with the Caribbean has had in the marginalization of the latter in global dialogue and decision-making?

Kirk-Anthony Hamilton: Pooling Latin America with the Caribbean has been one of the greatest missteps of our time. When you look at how organizations measure their outlook of countries, regions, economies and societies, we are pocketed with a group of countries with which we share very few similarities. They have a larger land mass, a larger population, a larger diaspora, they speak different languages, they have a different colonial history, different culture, a greater inflow of resources, and the list goes on and on. Because of our significant differences and their larger size and capital inflows, we end up being looked at through a very ill fitting lens. If you are on the outside looking in, trying to measure value, it is very easy for us to be overshadowed. Global leaders need to do something towards the unravelling of this grouping; it simply makes no sense and is detrimental to our region.

Daphne Ewing-Chow: What do you want to see happen for Caribbean people?

Kirk Anthony Hamilton: When we talk about success, we often tell people that you just need to be good enough or passionate enough to get ahead— but that that isn’t always the case. In the Caribbean, the table simply isn’t set for everyone; there isn’t a level playing field. Ultimately, what I would like to see is a more prosperous and progressive region that empowers all of its citizens to manifest their visions for themselves and their communities.

Daphne Ewing-Chow: In one sentence, tell me something that makes you optimistic.

Kirk Anthony Hamilton: Over time Caribbean people are beginning to own their place in the world in a way that I am increasingly proud of— I am moved to see how many young people from the region want to realize their true potential, to build a more inclusive economy and to leave their mark in the world.

Kirk-Anthony Hamilton: I have been travelling the world for years, promoting the idea of a more prosperous Caribbean. It took some time for the message to start resonating and I used to feel out of place in global circles because I’d come upon so many disinterested parties and local players who had seemingly given up. Today we are successfully convening some of the most powerful people and organizations in the world, leveraging their influence to highlight the region while also placing our ideas on the world stage, and are developing our population to operate within the new economy.

I am highly optimistic about the future.

All you need to know about Qatar: tips from an expat
9 of the best places to swim and cool down in Kraków: water sports, lakes and city beaches
Why Glenmorangie Rebranded
World’s Best 9 New Gins Tried And Tested
Dow Jumps 400 Points After Consumer Prices Cool Slightly In July—Has Inflation Peaked?