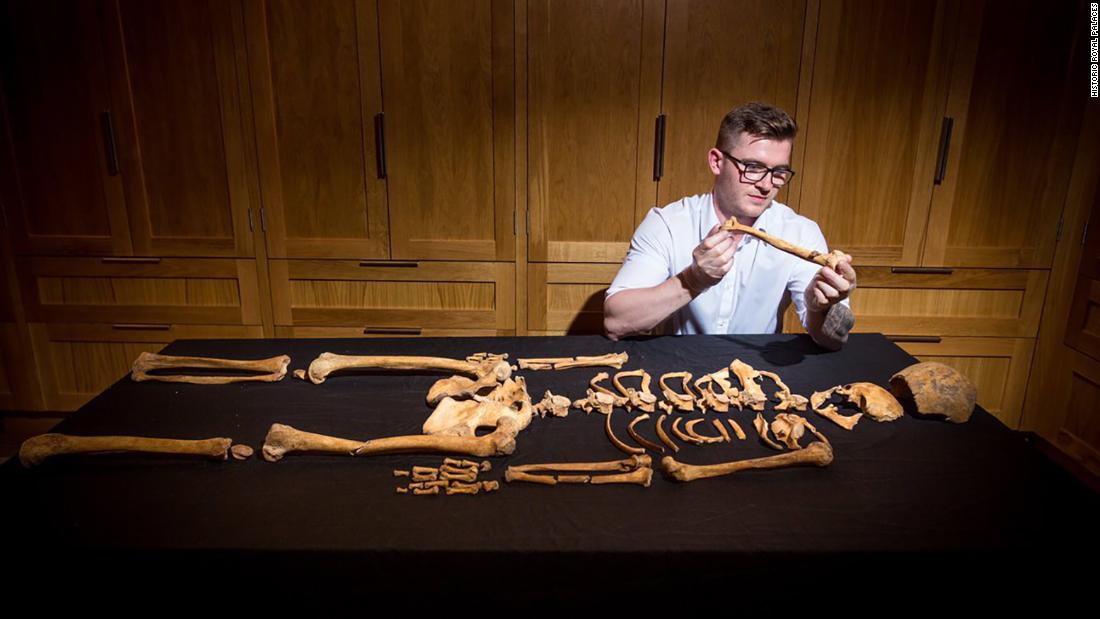 Travel
Share on Facebook
Share on Twitter
Share on Pinterest
Share on LinkedIn
The Chapel Royal of St. Peter ad Vincula is known as the burial place for famous Tower prisoners, including three queens of England: Anne Boleyn, Catherine Howard and Jane Grey. All were executed in the 16th century, and their headless bodies were buried under the chapel without a memorial, the organization’s website says.
In spring this year, an excavation of the chapel site discovered the two complete skeletons, shedding new light into the history of the Tower of London.
“These individuals are the first full skeletons to be assessed by an osteoarchaeologist (bone specialist) from within the Tower of London,” Alfred Hawkins, Historic Buildings Curator, said in a statement Monday announcing the discovery.
The Historic Royal Palaces wanted to make the chapel more accessible to the public, and needed to assess the grounds and what lies beneath them. Within the first two days of the dig, Hawkins and his colleagues came across fragmented remains that they later determined to be a dog.
“This burial was located beneath a mortar surface which was related to a building constructed before 1681, so we know the dog died before the construction of this building,” Hawkins said.
Continuing their dig, the team came across another mortar surface that was 22 cm thick, which indicates it was a base for a floor, according to Hawkins.
“This, combined with the documentary evidence and sherds (yes ‘sherds’ not ‘shards’) of medieval glazed tile, resulted in the possibility that we had found the floor of Edward I’s lost chapel which burnt down in 1513,” Hawkins said.
Beneath that surface, the skeletons of an adult female and a child were discovered. Both found lying on their backs facing up with their feet facing east, according to Hawkins. The adult is believed to have been buried in a coffin since nails were located with the remains, while the child was likely wrapped in a blanket before burial.
Hawkins noted that the exact date of burial couldn’t be determined, but it was most likely between 1450 and 1550. No burial goods, which were typical for the times, were found with the remains, but the fragments from a Roman jet bracelet were recovered.
“By looking for marks related to growth, damage, wear and disease we can create an image of how these individuals lived and died,” Hawkins said about the bones.
After exhuming the skeletons, they were analyzed by a specialist and the adult was determined to be between ages 35-45, and the child age 7. The bones told the scientists a lot about the pair. Both showed signs of illness, and the adult had signs of chronic back pain. Neither had signs of a violent death, which indicates that the individuals most likely lived and worked within the Tower of London, the statement says.
“Their growth shows not a comfortable life, but one which is typical of the period in which they lived,” Hawkins said.
Both were reburied in the Chapel on September 10 during a special ceremony. Hawkins said hundreds of skeletons are exhumed daily in the UK, but these two stand out to him because “they have offered us a chance to glimpse that human element of the Tower which is so easy to miss.”
“This fortress has been occupied for nearly 1,000 years, but we must remember it is not only a palace, fortress and prison but that it has also been a home to those who worked within its walls.”
The excavation was featured during an episode of “Inside the Tower of London“ that premiered on Tuesday.
“This is the best part of performing archaeological assessments and the joy of curating a royal fortress: by examining the physical remains of the past we are able to record, understand and share how our ancestors lived and died.”
This article was originally published by Cnn.com. Read the original article here.
Share on Facebook
Share on Twitter
Share on Pinterest
Share on LinkedIn

North Korea is destroying sites at the Mount Kumgang resort area
Robinhood, Carvana And More—These Stocks Are Surging After Announcing Cost Cuts
Your guide to Shenandoah National Park: all you need to know about trails, campgrounds, and mountain adventure
What the ‘golden age’ of flying was really like
The best spots to visit in Japan for the trip of a lifetime