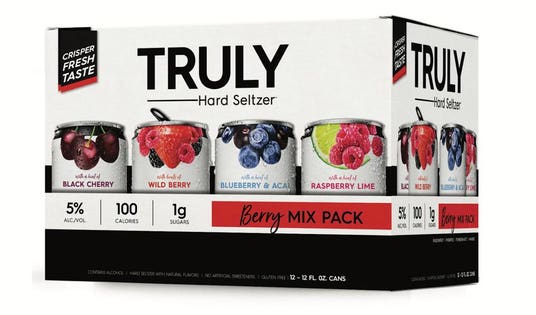 As hard seltzer continues to be a market disrupter in the alcoholic beverage arena, Truly Hard Seltzer has taken steps to stay aligned with the demands of its consumer base. The brand announced that they’ve revamped all 13 flavors of the beverage, bringing a more fruit-forward aroma and eliminating any bitterness or aftertaste.

“Within hard seltzer, taste and refreshment are the most important drivers of purchase. We had the opportunity to take something very good and make it great, and we are confident drinkers will agree we’re the best-tasting hard seltzer out there,” says Dave Burwick, CEO, The Boston Beer Company, which has Truly in its product portfolio.

In order to elevate the flavors in Truly’s Hard Seltzer, the company says that the team spent more than 1,5000 hours testing recipes that were designed to deliver a more crisp, clean and refreshing hard seltzer to drinkers. After the recipes were solidified, the company conducted more than 20 blind tastings with nearly 2,000 hard seltzer drinkers in cities throughout the United States.

“Since day one, we’ve continued to push ourselves, we’ve listened to our drinkers, and this new, improved taste is the result,” Burwick adds.

Consumers can expect updated packaging that touts the new formula, as well as a new Watermelon and Kiwi flavor, which will be added to the company’s Tropical Variety Pack. The new flavors have already started rolling out nationwide.

According to Nielsen Holdings, hard seltzer sales have jumped 220% so far in 2019, up from 177% in 2018. Truly and top competitor, White Claw, lead the category. The duo make up more than 85% of spiked seltzer sales.

The best things to do in Copenhagen, from history to hipster hangouts
Stocks Under Pressure Despite Strong Jobs Report As Investors Fear Bigger Fed Rate Hikes
Beyond by Four Seasons, An Exclusive Driving Journey Through Tuscany
The great unrest: How 2020 changed the economy in ways we can’t understand yet
The 5 best neighborhoods in Guadalajara: the best areas to stay, eat and sightsee