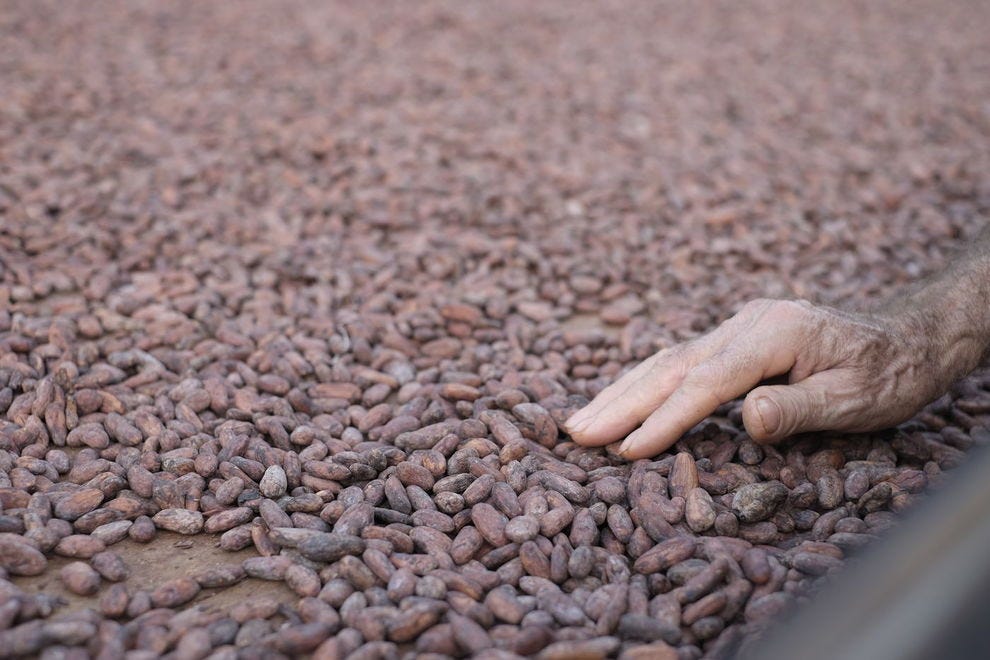 For someone who loves chocolate as much as I do, it seemed absurd that I had never visited a chocolate factory, so I booked a tour of Domori, an Italian producer headquartered outside of Turin, Italy’s chocolate capital.

Although it’s not usually the first gourmet specialty to spring to mind when one thinks of Italy, chocolate started to seep its way into Italian cuisine in the 16th century when cocoa beans arrived from the New World. Domori has only been on the scene for just over two decades, but has managed to hold its own, carving out a distinguished place for itself alongside the local industry titans and small-production artisans, many of whom have tempered this confection for centuries. 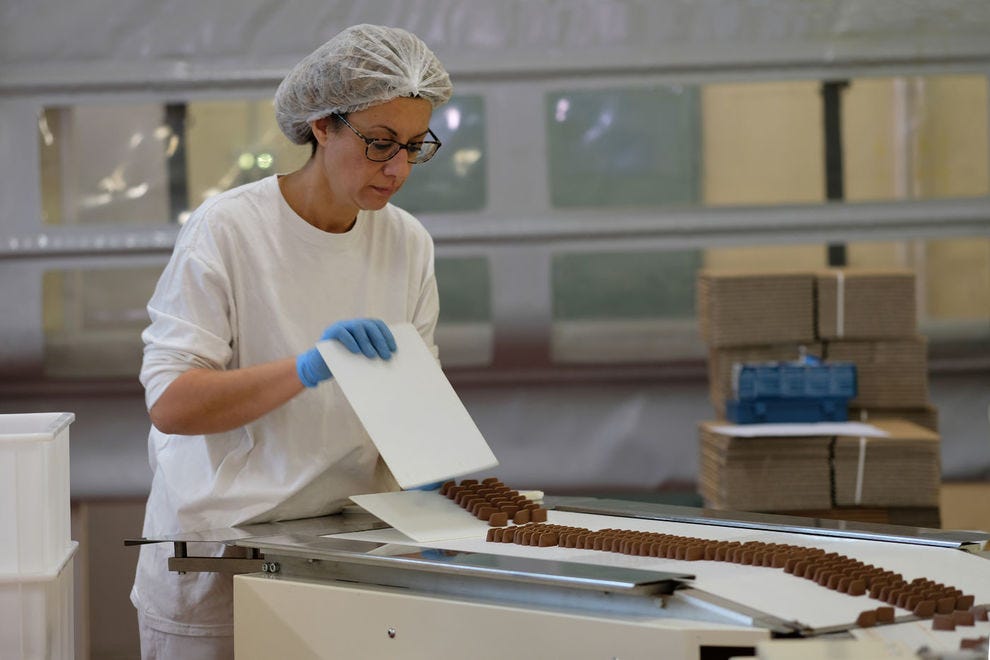 Chocolates in the making — Photo courtesy of Domori

Founder Gianluca Franzoni traveled to Venezuela in 1993 and after returning, he became determined to make his own chocolate. But not just any type of chocolate – his goal was to craft the best, purest, most authentic chocolate possible, and he spent the next four years experimenting before officially launching Domori in 1997.

Prior to the visit, I wasn’t sure what to expect. I knew I wouldn’t happen upon Lucy and Ethel shoving unwrapped bonbons into their mouths in an effort to keep up with the ever-increasing pace of a conveyor belt, and it was doubtful I would hear any Oompa Loompas chanting passive-aggressive counsel while rolling out any over-indulgers. Yet, the idea of visiting a chocolate factory still held an element of intrigue.

Upon arrival, I suit up in a disposable white coat with matching shoe covers and top off my look with a hairnet to embark on Domori’s bean-to-bar process as the rich, hearty aroma of roasted cocoa beans joins us for the entire length of the tour. Piles of burlap sacks stuffed with cocoa beans rest in the vast, high-ceilinged facility while gadgets and devices hum a tune undoubtedly similar to that of an apiary.

We sample a raw cocoa nib, which tastes dry, toasty, a bit astringent and as tannic as a strong red wine. Following fermentation, the raw cocoa beans are sliced open, their inner colors compared to the hues on an internal reference chart. Those that make the cut are then refined and roasted at 120°C, 30° lower than the standard temperature implemented by most industry chocolate makers, as the higher temperature burns off any defects in the lot.

Next, the beans are placed in a mill filled with stainless steel beads where the chocolate heats up and transforms into liquor, with a water cooler maintaining the desired temperature. Seventy-two hours of conching for refinement would normally be the next step, but Domori’s partial conching process lasts just eight hours as the addition of the water cooler keeps the acidity in check. 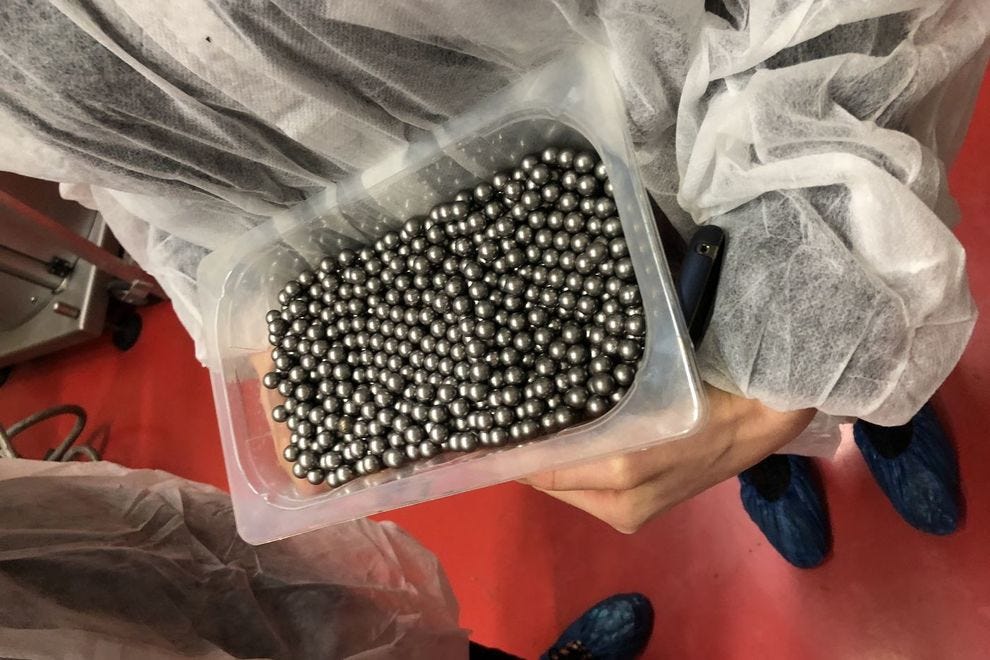 Once complete, a scrupulous panel examines every aspect of the chocolate – scent, taste, texture, appearance – to make sure it’s up to par. Then, we (a less scrupulous group of chocolate enthusiasts) continue to a chocolate tasting of our own.

Chocolate is generally made from three types of cocoa: criollo, considered the noblest; forestario, which counts for most of the world’s chocolate production; and trinitario, a natural hybrid of the other two. Criollo represents 0.001% of the world’s cocoa production and due to its rarity, it’s always blended with another cocoa.

Domori, which has a criollo-dedicated plantation in Venezuela, is the first-ever chocolate producer to sell a bar made from 100% criollo. I expected it to taste unbearably bitter, but I was wrong. Toasty at first bite, the chocolate becomes creamier as it starts to dissolve, coating my mouth with a velvety smoothness. 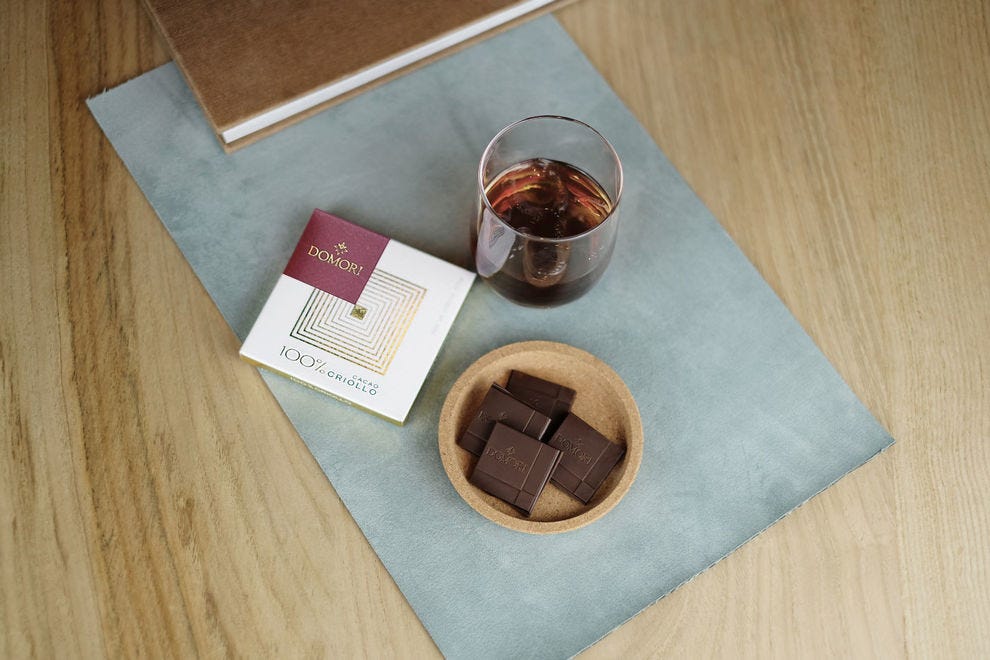 On the trinitario front, we sample a selection of single blends named for the countries where the beans were harvested. The Peruvian variety tastes soft and delicate with just a touch of acid, balanced by floral and caramel notes that linger on the palate after the last bite. The Madagascar bar couples bright red berries with a hint of spice for a soft, lingering finish.

In Venetian dialect, Domori means “two moors,” a reference to the two centuries-old statues who chime the bell atop St. Mark’s clocktower. As a leading maritime republic, Venice was a trading hub teeming with exotic spices and flavors from abroad, with cocoa as one of the top commodities.

Domori chocolate is made from just two ingredients, pure chocolate paste and sugar cane, with no additives like vanilla or butter. The factory opens to the public once a month, and you can book directly with them…no golden ticket required.