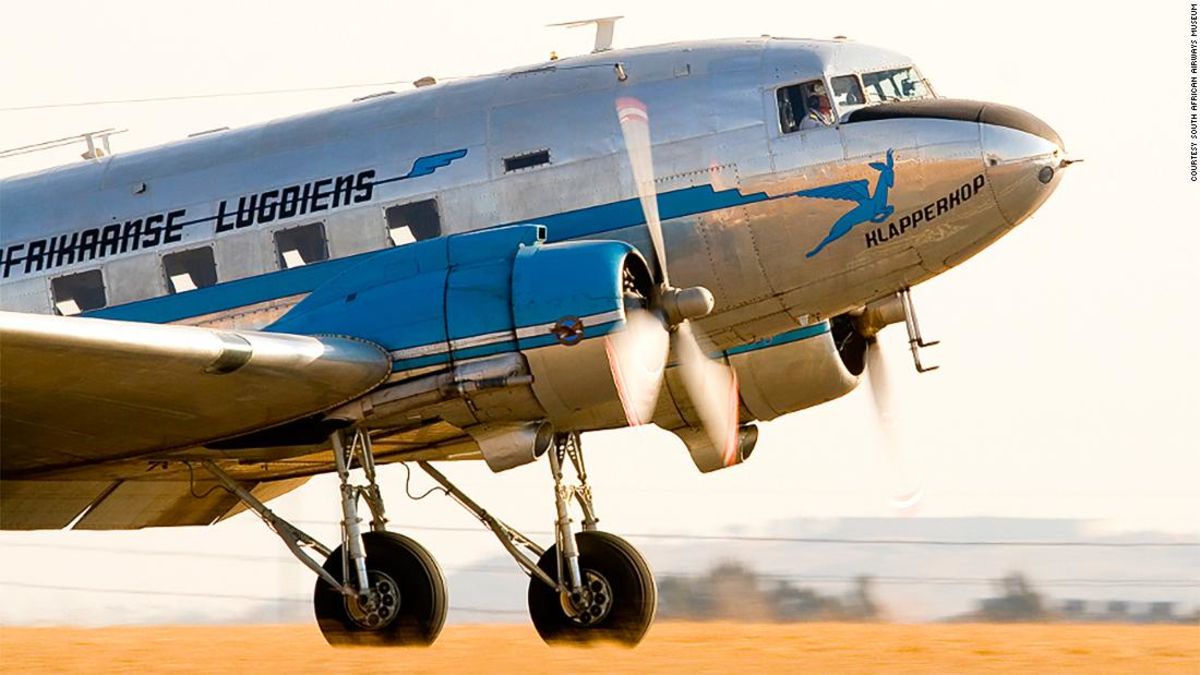 (CNN) — Despite being little more than a century old, aviation has inspired some pretty impressive museums.

From the Wright Brothers to supersonic travel, there are no shortage of opportunities for aviation enthusiasts to immerse themselves in the epic wonder of flight and its fascinating history.

Yet only a relatively small part of these museums and exhibits are devoted to the one segment of the broader aviation world that has had, perhaps, the most influence on everyday people’s lives: airlines.

Although it would take decades for air travel to become the mass market item it is today, the origins of commercial aviation can be traced back to very early years of powered flight.

It didn’t take long for airlines to appear after Orville and Wilbur Wright kick-started the aviation era at Kitty Hawk, North Carolina, in 1903. Amazingly, some of those early pioneers of commercial flight are still with us and going strong.

With airlines such as KLM and Avianca celebrating their centenary this year, interest is greater than ever in preserving airline heritage. Enthusiasts and volunteers around the world have contributed to creating some fantastic museums for the public to enjoy. Here are 10 of the best.

TWA Museum: Not quite as glitzy as the TWA hotel.

The inauguration of the TWA hotel at New York’s JFK airport made quite a splash (and not just because of the infinity pool with unimpeded runway views).

What many don’t know, though, is that this iconic American airline, which ceased operations in 2001, has its own dedicated museum a few thousand miles west, in Kansas City, Missouri. The Mid-Western city played a key role in the early days of TWA, before it moved its main hubs elsewhere, to Saint Louis and New York.

The TWA museum is a rather modest affair. It’s located on one side of an office building right on the edge of Kansas City Downtown Airport (not to be confused with Kansas City International (MCI), the city’s main airport).

Posters, uniforms and all sort of memorabilia pile up in the few rooms occupied by the museum. The star of the collection: a beautifully restored Lockheed Electra aircraft that can be visited on the adjacent hangar.

A visit to the TWA museum can easily be combined with a trip to the Airline History Museum, which is located just 300 meters away, in a hangar on the far side of Kansas City Downtown airport. Despite their physical proximity, though, the two museums are not connected.

The National Airline History Museum is a small private museum which keeps several aircraft on display.

The highlight of its collection is a Lockheed L-1049 Constellation which has starred in several Hollywood movies, including Martin Scorsese’s 2004 film “The Aviator,” featuring Leonardo DiCaprio, Kate Beckinsale and Cate Blanchett.

This Douglas DC-3 takes pride of place a the C. R. Smith Museum.

American Airlines’ museum is named after Cyrus Rowlett Smith, the airline’s president for 34 years and widely considered the powerhouse behind AA becoming one of the world’s largest airlines.

The museum opened in 1993 but underwent a major renovation in 2018, with the exhibitions now laid out so that all different roles within the airline, from senior management to baggage handlers, are duly represented.

The highlight of the museum is a Douglas DC-3 aircraft, but also worthy of note are the large collection of uniforms, a full MD-80 cockpit and an interactive mockup of the airline’s control center.

Many of the exhibits are interactive so that visitors can learn hands-on what it takes to run an airline.

Fittingly for one of the world’s oldest — and largest — airlines, Delta has its own museum next to its Atlanta-Hartsfield hub.

The initiative started in the 1990s thanks to a group of enthusiastic employees and retirees who sought and acquired one of Delta’s historical DC-3s.

With the years the collection kept growing — it now holds a Boeing 767, a Boeing 757 and the first Boeing 747-400 to ever be built, as well as several other smaller historical airplanes.

Remarkably, the preservation of many of these aircraft was made possible through voluntary contributions from Delta’s staff.

Visitors can find also other items related to Delta’s past, such as an exact replica of its base in Monroe, Louisiana, as it looked in the 1930s.

British Airways’ Heritage Collection is located at the airline’s HQ and, although it’s open to the public, you should call in advance to get your pass.

Inside it’s a proper museum with display cabinets, lots of model planes, mannequins, framed documents and the like. There’s even a royal visitor book.

It’s also possible to take a tour with a team member, which takes about an hour.

The Heritage Center is having a busy year as it’s heavily involved in the British flag carrier’s centenary celebrations this year.

Although the modern company British Airways wasn’t founded until 1974, it traces its origins back through successive mergers and acquisitions to a post-World War I airline called Aircraft Transport and Travel.

Emirates Aviation Experience offers a hands-on exploration of the industry.

More of a theme park than a traditional museum, the Emirates Aviation Experience in Greenwich, southeast London, is a good example of the latest generation of airline museums.

Highly experiential and with a strong focus on educational components for children, the Emirates Experience center offers an up-to-date glimpse into the commercial aviation world of today.

Located next to the Emirates cable car, which links the two banks of the river Thames, the Aviation Experience center features two Airbus A380 and two Boeing 777 simulators, giving visitors a chance to try their piloting skills.

Located in the middle of the Queensland outback, about a thousand miles northwest of Brisbane, the Qantas Founders Museum preserves the heritage of Australia’s oldest and most celebrated airline.

Its collection includes aircraft from all eras of Qantas’ history, such as the Douglas DC-3, a Boeing 747 and a Boeing 707, but one of its most celebrated exhibits is a Lockheed Super Constellation aircraft that was recently recovered, after a titanic effort, from a scrap yard in the Philippines.

The museum is currently in the midst of a AU $3 million project named Luminescent Longreach to put its historical aircraft collection under roof.

This will make it possible to launch a nighttime light and sound show that will tell the story of Qantas through images projected on the fuselage of the Boeing 747, 707 and Super Constellation aircraft.

The expectation is that it will be ready by the spring of 2020, in time for the airline’s 100th anniversary. The museum has a full program of events lined up to celebrate.
Qantas Founders Museum, 1 Hudson Fysh Drive, Longreach Airport, Longreach QLD 4730, Australia; +61 7 4658 3737

This Douglas DC-3 still takes to the air.

Founded and run by a group of aviation enthusiasts, the South African Airways Museum Society has, since the late 1980s, been devoted to the preservation of South Africa’s aviation heritage.

The museum, located on the outskirts of Johannesburg, features an eclectic mix of aircraft, including two huge Boeing 747s. Even more impressively, three of the aircraft on display (2 DC-4s and one DC-3 built in the 1940s) are still serviceable.

To visit the SAS Museet, located next to Oslo Airport, is to embark on a journey through the story of air travel in Scandinavia.

The museum has a section dedicated to each of the three mother companies — Denmark’s DDL, Norway’s DNL and Sweden’s ABA/SILA — which joined together after World War II to form Scandinavian Airlines System (SAS).

There’s a large uniform collection, featuring all SAS uniforms from 1946 to 2019, as well as scale models and other memorabilia.

A technical section displays several engines, including a real Pratt & Wittney engine and an RR Avon jet engine used by the Comet and Caravelle airliners.

There’s also a section dedicated to polar routes, linking Europe to North America and Japan and overflying the North Pole — for many years the cornerstone of SAS long-haul service.

A few years ago, the museum considered taking in the last MD-80 aircraft operated by SAS. That was not to be, but the museum’s four-storey tower is open to the public and it provides views of the adjacent runways. This feature means it’s possible to combine your visit with a bit of plane-spotting.

Before planning a visit, take into consideration that the museum only opens on Tuesdays and Sundays.

The Air France Museum Association, supported by the French flag carrier and staffed mainly by volunteers, takes care of the airline’s rich historical collection of documents, objects and memorabilia (including the largest collection of airline posters in the world).

At the moment, this association is working on a project that, although not a museum in the traditional sense of the word, is worth a mention here.

Air France’s virtual museum, still a work in progress, is expected to become a new channel to browse through the airline’s history.

It will have several virtual exhibition rooms covering different aspects of Air France’s history. One of the highlights will be the virtual tour of 12 different aircraft models (six pre-World War II models and six from the post-war years), from the World War I-era Breguet 14 to the Boeing 747 jumbo jet.

How to explore the lavender fields of France (and things to do when they’re not in bloom)
This Chinese province set a 9% GDP target — but then it locked down
Your guide to Shenandoah National Park: all you need to know about trails, campgrounds, and mountain adventure
The Idle Rocks Is Cornwall’s Best-Kept Culinary Secret
This travel company wants tourists to visit Ukraine right now