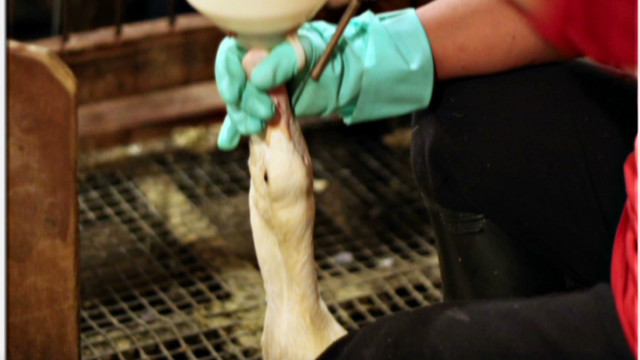 Travel
Share on Facebook
Share on Twitter
Share on Pinterest
Share on LinkedIn
New York will ban restaurants and grocery stores from selling foie gras, after the bill passed the city council Wednesday. Mayor Bill de Blasio’s office confirmed to CNN in an email that he will sign the bill into law.
The ban comes amid increasing scrutiny on foie gras. The bill calls the luxury good a “force-fed product” and, in a statement to CNN, councilwoman Carlina Rivera — the prime sponsor of the bill — called force-feeding an “inhumane practice.”
“As a lifelong advocate for animal rights, I am excited that the Council has voted to pass this historic legislation to ban the sale of these specific force-fed animal products,” Rivera stated.
And for those who try to sell the item despite the ban? They’ll be facing a civic penalty upwards of $2,000 for each violation.
New York City’s best classic restaurants: Time-tested favorites

Foie gras has long been a point of debate.
In 2012, California’s foie gras ban went into effect, only to have the ban overturned in 2015. Then, in 2017, the ban was upheld by a circuit court judge — a decision that was backed by the Supreme Court in January of 2019.
Chicago’s history with the ban is almost equally as tumultuous. The Chicago City Council passed the ban in 2006, only to lift it two years later.
What makes foie gras so contentious is the method of preparation. Foie gras is made of fattened duck or goose liver, and it has long been considered a French delicacy — so much that the country has protected it as part of France’s cultural heritage. But the product is made by force-feeding ducks, an practice that many people, like councilwoman Rivera, have found troubling.

The foie gras debate, broken down

The dish is not without its defenders. Foie gras producers and supporters argue that the process isn’t abusive like people assume — ducks stuff themselves with food as part of their migration journeys. So, they argue, when being force fed to make foie gras, the ducks don’t suffer. Plus, ducks always swallow their food whole, and their esophagi are stretchable.
The videos of the truly abhorrent foie gras production facilities represent a minority of foie gras production as a whole, supporters argue. And, when you take ducks off the diets, their livers go back to normal. No harm, no foul.
But critics don’t think so — arguing that force-feeding anything is animal cruelty and that the practice causes liver damage.
Anthony Bourdain famously defended foie gras on his show “No Reservations,” saying “you see worse in the pay-per-view film on the hotel channel — and that’s people, for God’s sake.”
Others have said that there were much worse practices in the food industry than foie gras, which don’t receive nearly as much criticism. Chef Naomi Pomeroy’s restaurant, Beast, in Portland, Oregon, was the site of a foie gras protest back in 2010. She said the protesters had their facts “seriously wrong” and argued that factory farms are actually worse.
“There truly are bigger, better fights to be had,” she said.
This article was originally published by Cnn.com. Read the original article here.
Share on Facebook
Share on Twitter
Share on Pinterest
Share on LinkedIn

How to explore the lavender fields of France (and things to do when they’re not in bloom)
The surprising hobby that’s drawing 70-year-olds to the beach
Ibiza Gran Hotel Ushers in Gastronomy Revival with Two New Restaurants and Night Club
Norwegian Cruise Line shares fall as revenue, outlook lag pre-pandemic levels
These Are Some Of The Best Places For Stargazing In The U.S.