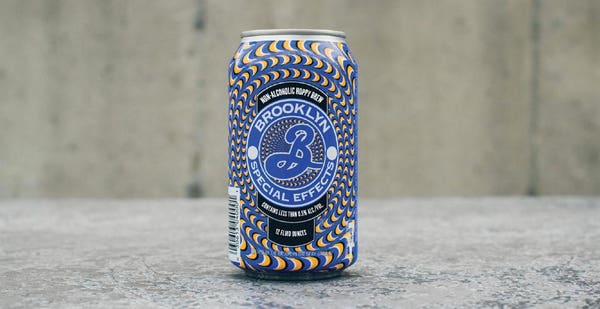 As Millennials continue to change the conversation about American drinking culture, mindful drinking has become a phrase that is top-of-mind. Many Millennial and Gen Z sippers are looking to lower-ABV drinks and craft mocktails as part of a healthier, well-balanced lifestyle.

The beer industry has taken notice of this shift and while craft brewers everywhere are finding new, unique, sustainable and even healthier practices, Brooklyn Brewery is taking it a step further. The company has announced the launch of its first nonalcoholic craft beer, dubbed Special Effects. It will begin rolling out this month and is set to be in all 30 of the brand’s markets by January 2020.

“We did a lot of market research and we found that people [in their 20s] have grown up with different drinking patterns,” says Robin Ottaway, president, Brooklyn Brewery. “We knew that something was happening here and it made sense to explore this.”

Ottaway and the others at Brooklyn Brewery got to work on developing a non-alcoholic brew like those found in European countries like Sweden and the U.K. He said that while the beer being nonalcoholic was a priority, there was something else that was more important—flavor.

“We knew that it had to taste good, so we figured if we could make a craft beer without alcohol, there would be a market for it,” he says.

Special Effects is made in the style of an amber lager, notes Ottaway, and has notes of peeled grapefruit and fresh zesty aromas with a clean bitter edge. It pairs well with pub foods, salads and just about anything off the grill, says Ottaway. The beer is going to be introduced through traditional cans and bottles and then will make its way to draft.

“This beer is fun, energetic and has a good taste. I feel like, over time, we are going to continue to see this trend grow,” he says, noting that he foresees more options available in the nonalcoholic beer sector sooner rather than later.

“Nonalcoholic beverages are no longer just for people who can’t drink, for whatever reason they choose. There is a fundamental shift in consumer drinking habits and consumer behavior. All of those lines are becoming very blurred, and we want this to be a solution for them,” he says.

The cutest animals in Australia and where to find them
50 small and lovely UK hotels for less than £150 a night
Why Opopop Believes They Can Reinvent Popcorn
Fiona’s a big sister. New baby hippo born at Cincinnati Zoo
The 20 Mediterranean islands you must visit in your lifetime