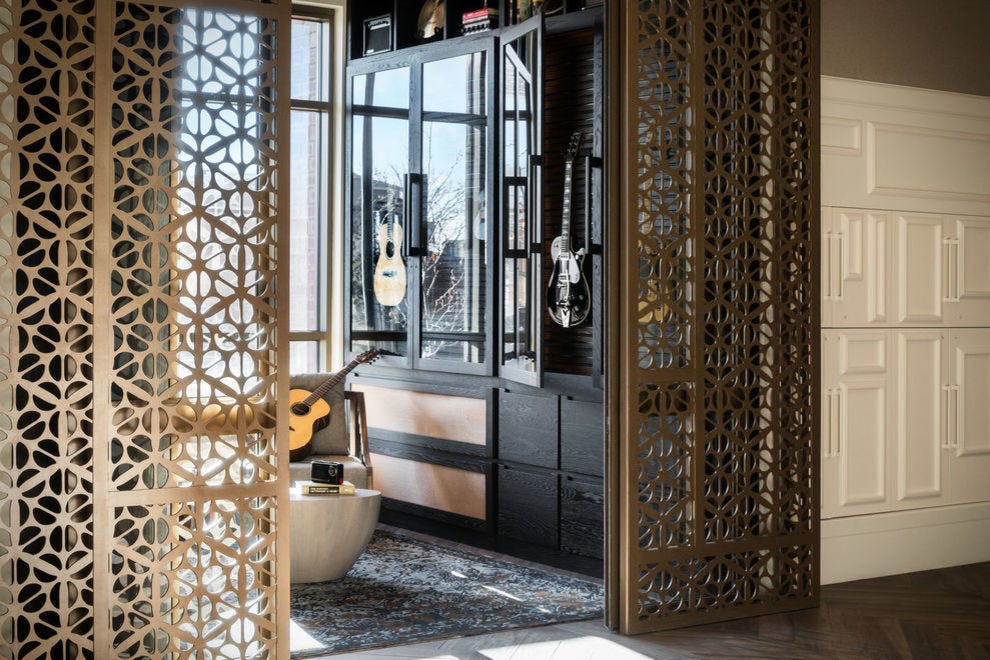 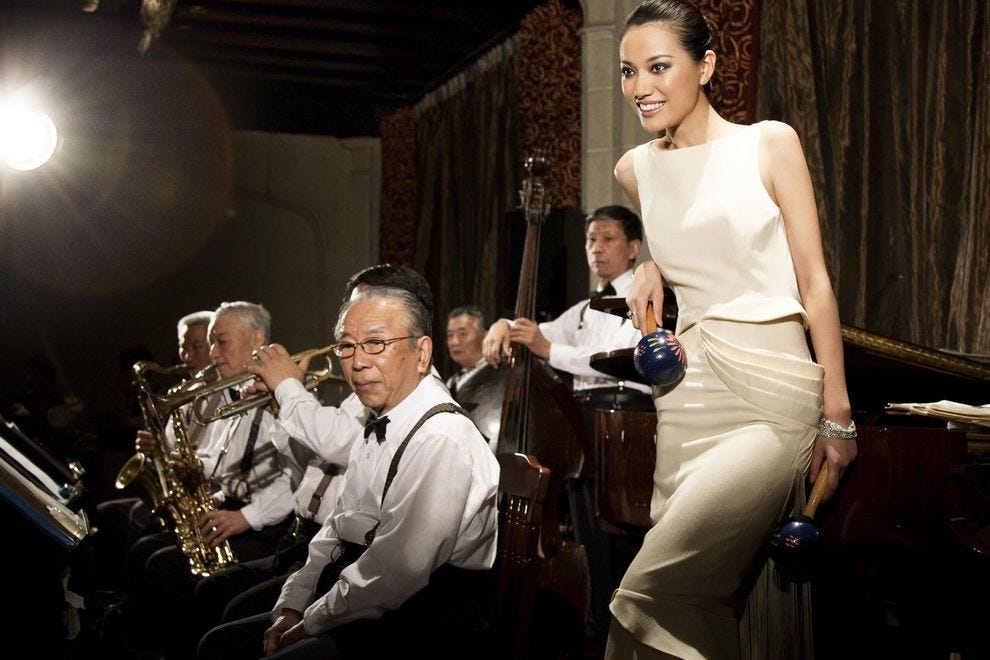 These hotels hit the right notes

Whether you want to listen to live music or your favorite artist on vinyl, or maybe learn to play guitar, these hotels will surprise and delight musicians and aesthetes with their melodies. 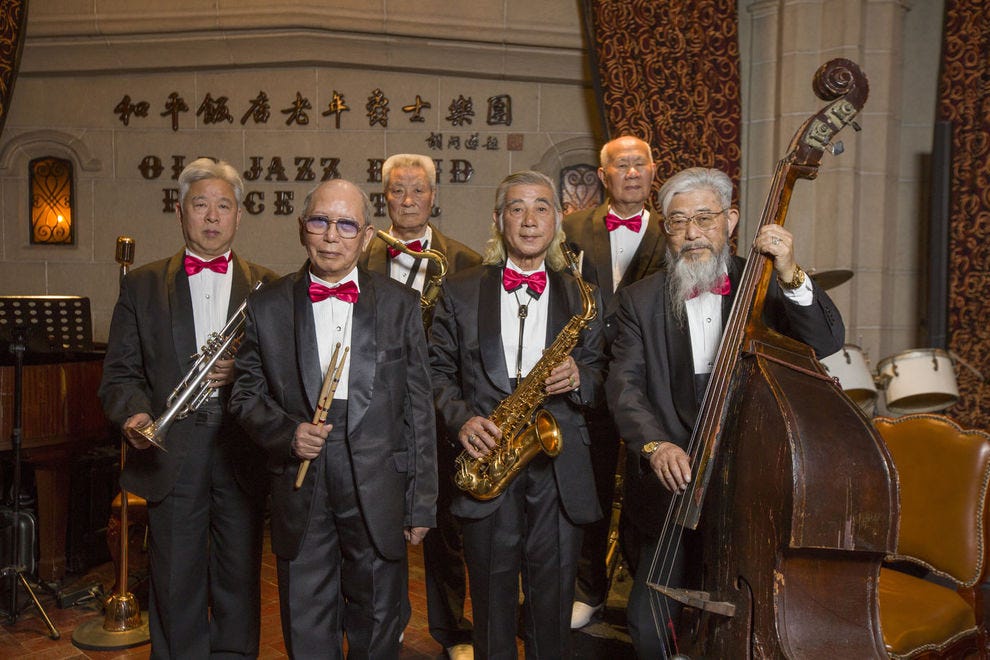 For the best jazz in Shanghai, step back in time to the 1920s with the intimate jazz bar at the Fairmont Peace Hotel. The hotel’s octogenarian sextet comprise the world’s oldest jazz band, with an average age of 82, but their passion and talent are immortal. The lively music, including classics like “Summertime” and “Moon River,” continues each night until 2 am with an enthusiasm that’s contagious. 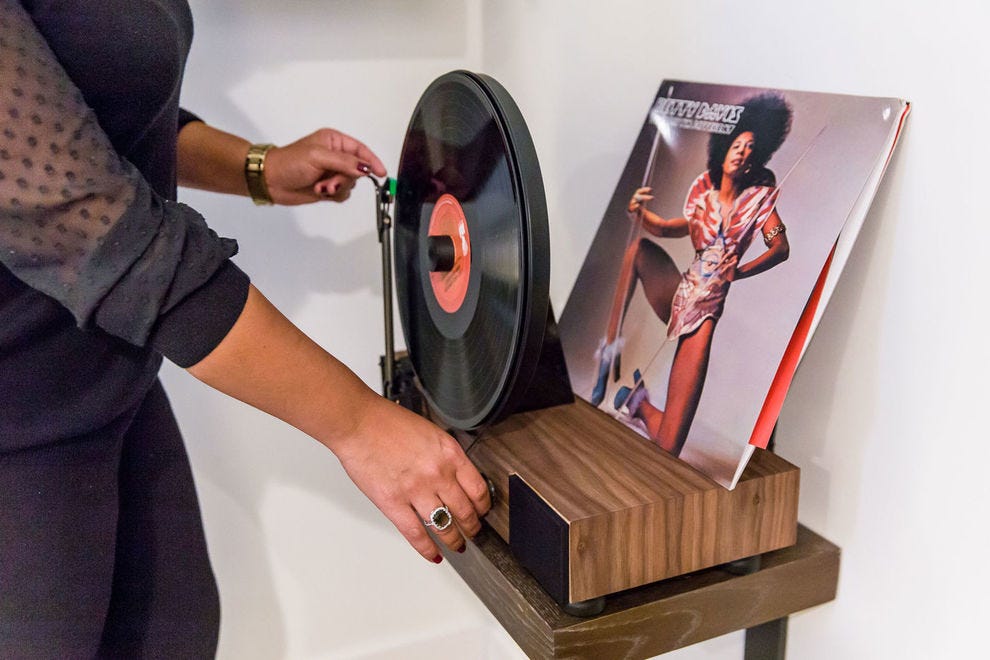 Hotel Theodore in downtown Seattle is an artsy boutique property by Provenance Hotels known for its local brand collaborations. Recently, they partnered with Light In The Attic Records, a Seattle-based independent record label, to curate musical amenities in all rooms on the hotel’s 20th floor. Each guestroom has been outfitted with photos of musicians, turntables and a label-curated selection of vinyl from Light In The Attic’s diverse catalog of artists. 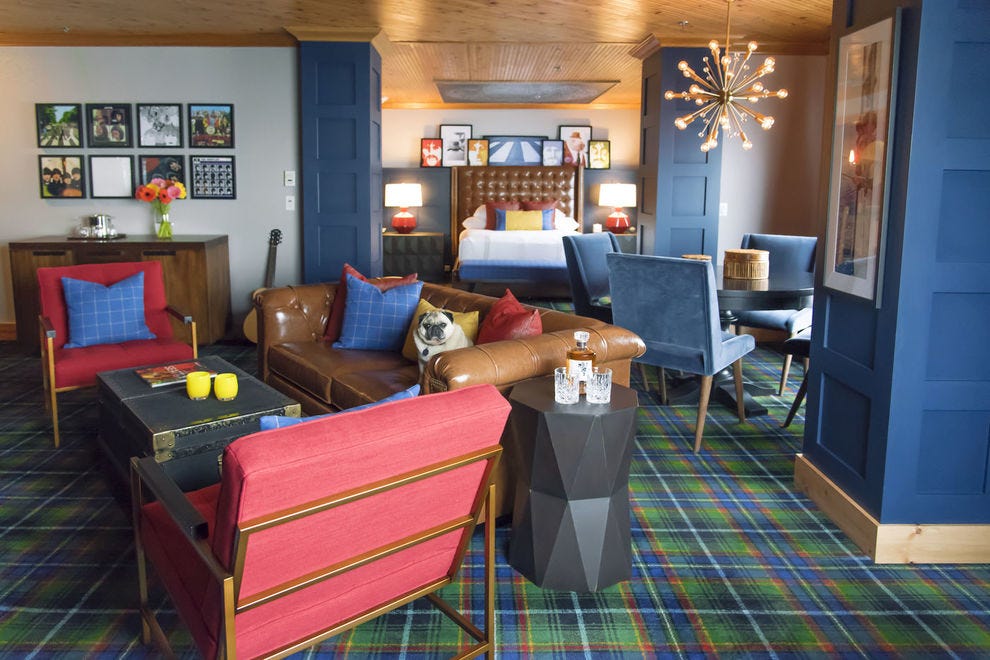 Photo courtesy of The Edgewater

In 1964, when The Beatles were on their first world tour, The Edgewater Hotel was the only hotel in Seattle that would accept them as guests. They famously fished out of their window from Seattle’s only true waterfront hotel and now have a suite dedicated in their honor. There’s also a Pearl Jam suite, designed in partnership with their fan club and decorated with vintage band posters. Both rock n’ roll suites have vinyl record players with the band’s albums and all guests staying at The Edgewater Hotel can rent record players and guitars with sheet music. 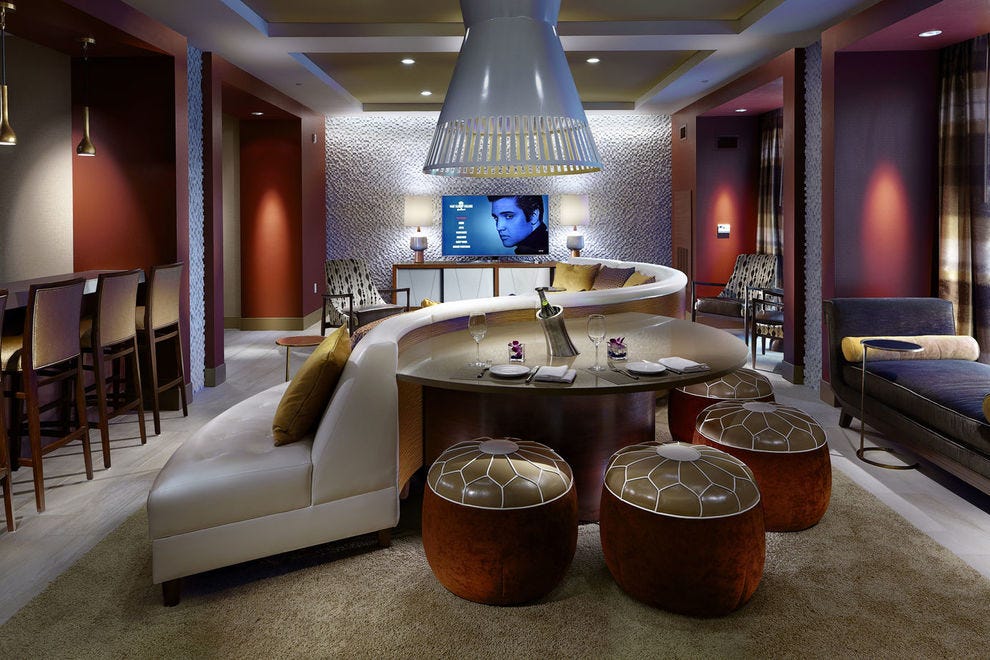 Live like the King himself at The Guest House at Graceland, just across the street from Elvis Presley’s iconic Memphis mansion. Enjoy Elvis’ favorite peanut butter cupcakes before bed and sing your favorite Elvis songs during weekly karaoke night. The 464-seat house auditorium frequently hosts live performances and movie screenings and the property is a member of Preferred Hotels & Resorts’ lifestyle collection.

Photo courtesy of The Elizabeth Hotel

Every guestroom at The Elizabeth in Fort Collins has a Crosley record player, and guests have a selection of more than 1,000 albums to help themselves to in the lobby’s vinyl library. There’s also an instrument lending library with a wide variety of first-rate string instruments (including a Fender American Vintage ’52 Telecaster) along with keyboards, amps, headphones, tuners and straps. 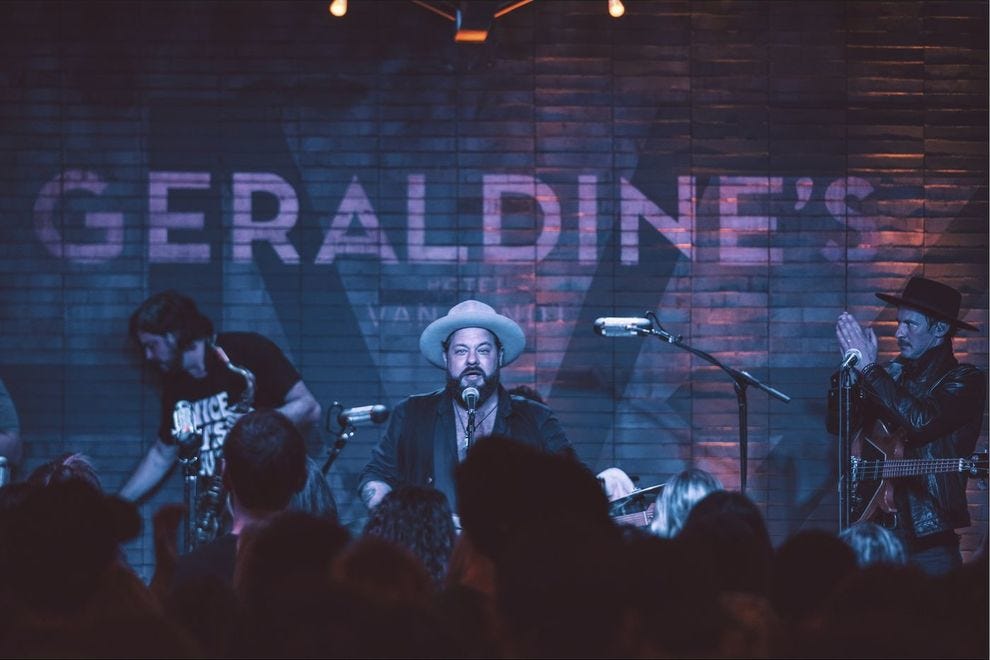 Austin is known as the Live Music Capital of the World and the Kimpton Hotel Van Zandt capitalizes on that reputation. Local and traveling musicians perform every night at Geraldine’s, the hotel’s fourth floor restaurant, which serves Texas-inspired food beside a state-of-the-art sound stage. Brass trombone chandeliers hang from the lobby ceiling and in-house Director of Music Hannah Hagar curates musical experiences including studio tours, vinyl press tours and playlists throughout property that reflect the time of day and season. 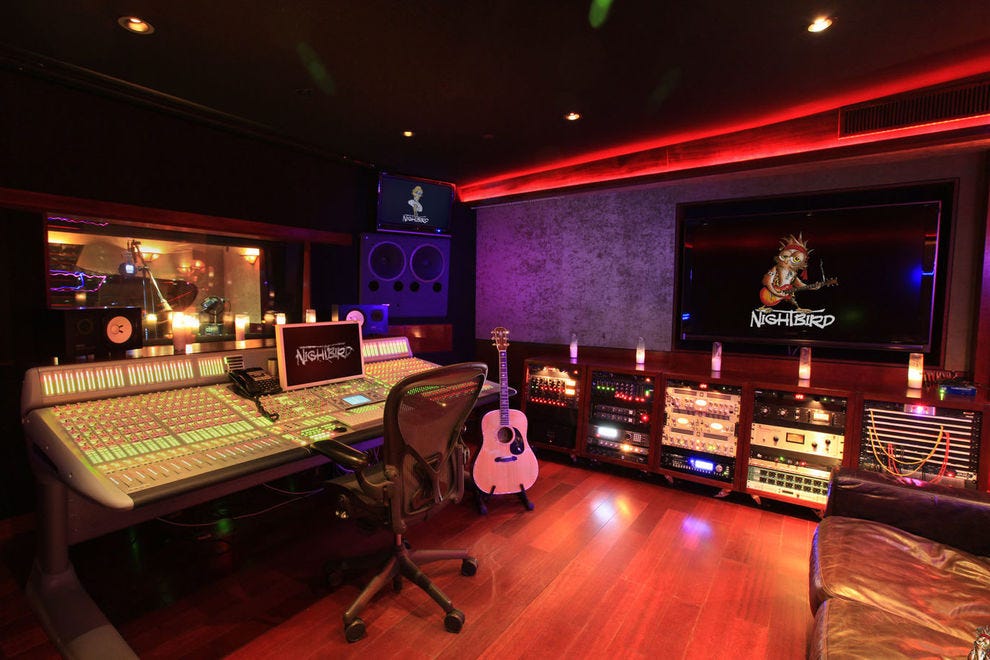 West Hollywood’s Sunset Marquis Villas & Suites has been a home away from home for rock stars since opening its doors in 1963. The hotel houses NightBird Recording Studio, where a whopping total of 45 Grammy-winning songs have been written and recorded. Hotel guests can try to book a recording session between celebrities (Bob Marley, The Rolling Stones and Led Zeppelin are just a few famous guests) and order room service while jamming on the state-of-the-art equipment with the help of expert engineers. 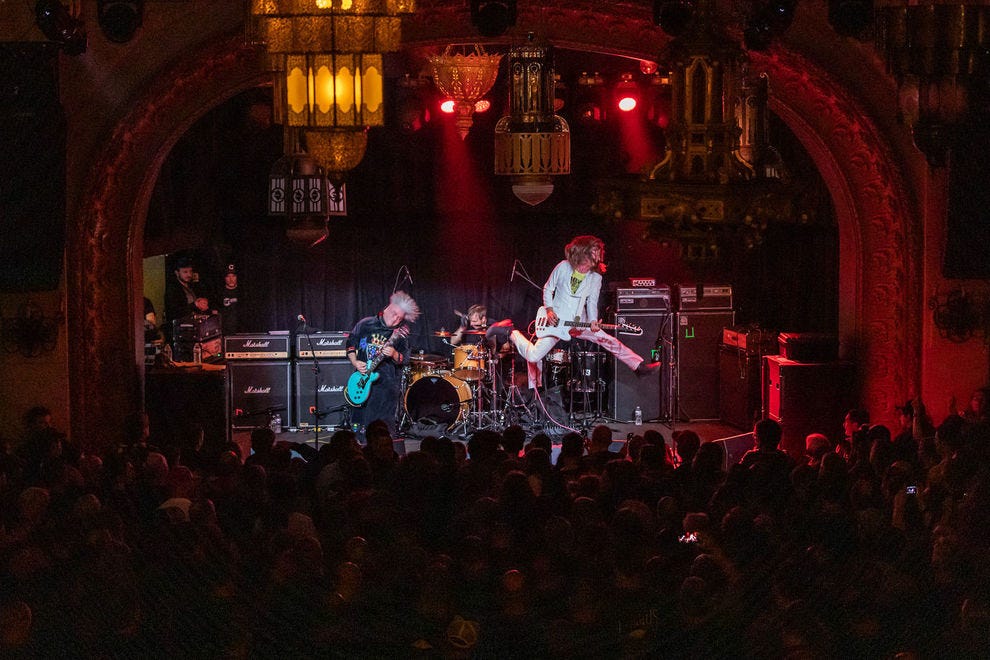 McMenamins is a quirky cult favorite in the Pacific Northwest and their newest Elks Temple Hotel is transforming the music scene in Tacoma, Washington with a 700-capacity live music concert venue in their Spanish Ballroom. The hotel itself is a boutique property, with just 45 rooms, built in a once-abandoned historic property. Guest rooms honor Tacoma musicians like Krist Novoselić, bassist and founding member of Nirvana. 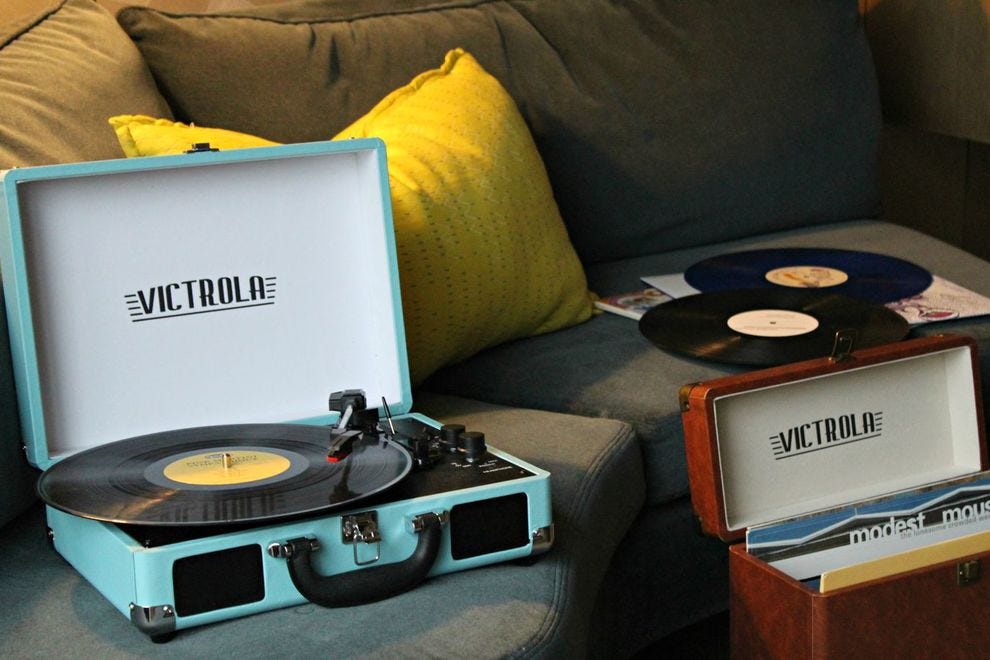 Photo courtesy of The Duniway Portland

The vinyl suite at The Duniway Portland comes with a custom U-turn player with more than 900 records to choose from. But all 327 hotel rooms have access to complimentary portable record players upon request, along with customized playlists curated by local personalities like Portland’s mayor, the hotel general manager and head chef Chris Cosentino. For example, the Abigail Scott Duniway collection, inspired by the property’s namesake changemaker, features top female empowerment anthems from artists such as Aretha Franklin, Lady Gaga, Beyoncé and Madonna. 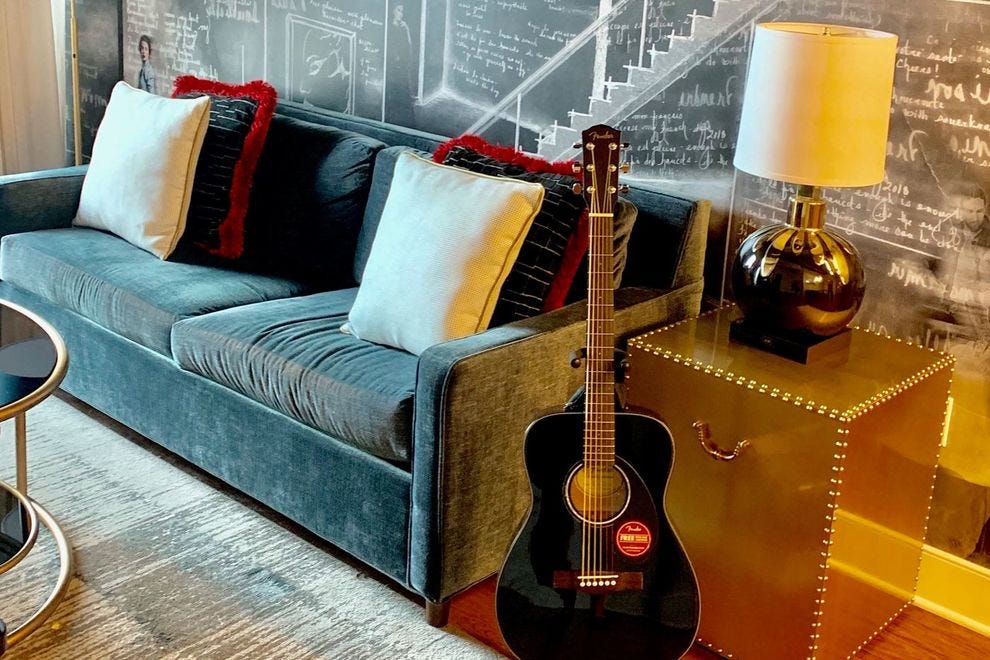 Photo courtesy of The Marquee

The Marquee is in the heart of New Orleans‘ historic theater district, less than a block away from musical performances at the Joy Theater and Saenger Theatre. Every hotel room has a Fender guitar, with access to free tutorial video lessons. Local musicians also teach live beginner lessons on a regular basis and perform on stage in the courtyard. Plus, guests can join friendly karaoke competitions on the rooftop pool deck or courtyard. 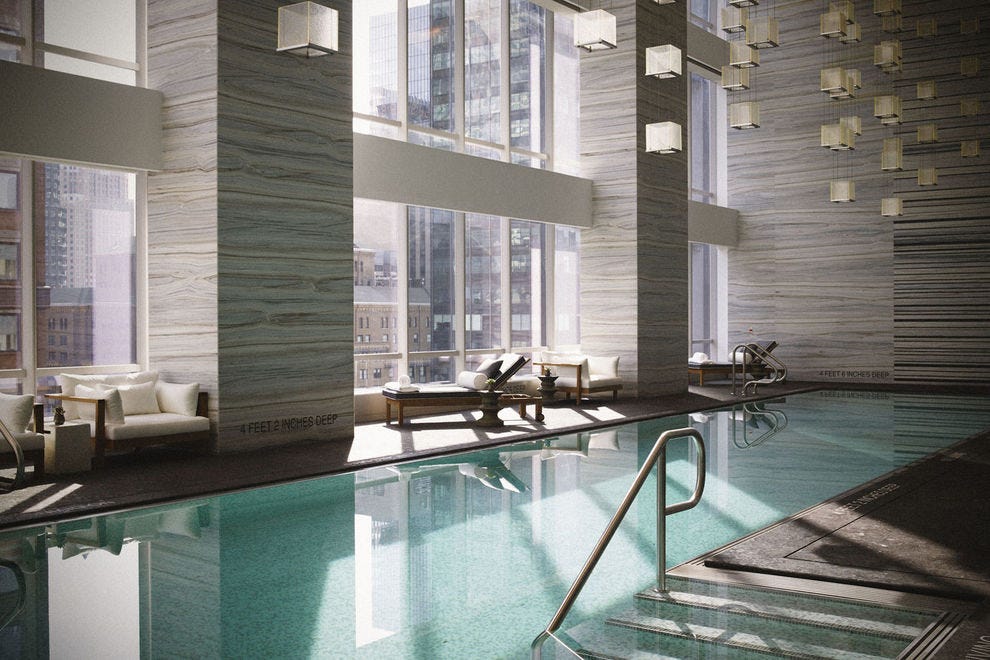 The 65-foot-long lap pool at Park Hyatt New York is equipped with six underwater speakers that play a soundtrack of classical music curated by Carnegie Hall’s artistic team. Carnegie Hall is just across the street, but here you can enjoy orchestral symphonies and piano solos while swimming laps. The soundtrack changes a couple times per year.

11 things every local knows about Cape Cod
K2 just had its busiest climbing season ever
12 of the best things to do in Italy: insider tips on culture, food and sustainability
I spent 7 days riding my bike 468 miles across Iowa with a pack of 18,000: here’s how I did it
Tourist rides moped around Pompeii