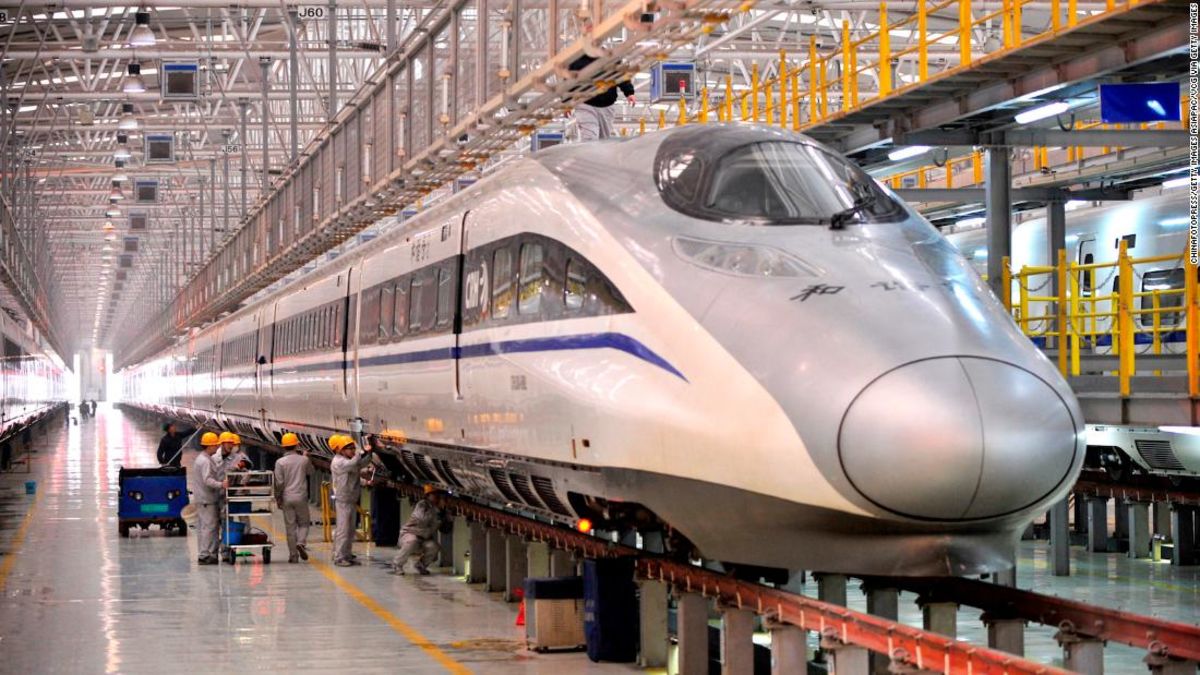 With one project under construction, another approved and others being considered, many in the country are questioning whether high-speed rail (HSR) will be the right fit for the country.

“This is going to be a big change for Thailand,” says Thanet Sorat, an adviser to Thailand’s Senate Committee on Transportation, vice president of shipping company, V-Serve, and president of the Thai Authorized Customs Brokers Association.

He hopes to see sleek trains pinballing around the country at 155 mph (250 kph) within five years.

Both projects currently in the works will employ Chinese HSR technology. Though Thailand declined Chinese loans, the projects are considered a part of the Belt and Road Initiative (BRI), a plan that aims to connect China to the rest of Asia through new transport infrastructure.

Bangkok to Pattaya in 45 minutes

Expected to open in 2021 to replace Bangkok’s 103-year-old Hualamphong Station, a massive new rail hub in the city’s Bang Sue district will serve passengers using both HSR and the country’s existing railway network, which is being upgraded from single to dual track.

Tied to this, on October 24, a conglomerate led by Thailand’s CP Group signed a contract with the State Railway of Thailand (SRT) for the construction of a HSR line linking Bangkok’s two airports, Suvarnabhumi and Don Mueang, to three eastern provinces.

It will operate in addition to the existing Airport Rail Link, an elevated train that connects Suvarnabhumi to Bangkok’s metro system.

The planned line, beginning from Don Muang then passing through Bang Sue, will also stop at Makkasan in central Bangkok before proceeding to Chachoengsao, Chonburi, Sriracha and Pattaya, a major tourist destination located 75 miles (120 km) south of Bangkok on the Gulf of Thailand.

Expected to begin service in 2024, the 137-mile line will terminate at U-Tapao Airport, outside of Pattaya in Rayong province.

The new line will connect Bangkok’s two airports with U-Tapao Airport in Rayong province, an industrial and fishing hub.

The government plans to move some 10% of flights from Bangkok to a redesigned U-Tapao in order to ease congestion at Suvarnabhumi and Don Mueang.

“To do that, they need a transportation link between the airports, and it could be a good opportunity for HSR,” says professor Jittichai Rudjanakanoknad of Chulalongkorn University’s Department of Civil Engineering.

A conglomerate led by Thailand’s Charoen Pokphand Group (CP), which also includes the China Railway Construction Corp., will cover an investment of 224 billion baht ($7.4 billion) in exchange for real estate concessions and a 50-year license to operate the line.

One goal is to provide easy access to the Eastern Economic Corridor (EEC), a zone that Thanet says constitutes 80% of total foreign investment in Thailand.

Supporters point out that HSR will reduce travel time between Bangkok’s two airports to just 20 minutes, and shuttle tourists to Pattaya in less than an hour. They also predict it will reduce traffic on highways, curtailing accidents in a country with one of the world’s highest road fatality rates.

As it stands, transferring between Suvarnabhumi and Don Mueang entails a shuttle bus journey that can last an hour or more during Bangkok’s notoriously sluggish rush hours.

Reaching Pattaya from Suvarnabhumi requires haggling with a taxi driver, taking a cramped van or traveling across town to catch a bus from Ekkamai Terminal for the two-hour ride.

“Linking the three airports is a noble objective,” says Ruth Banomyong, director of the Center for Logistics Research at Bangkok’s Thammasat University.

But he and other critics question whether HSR is the right choice, given the high cost and relatively short distances involved. Some argue that dual-track rail would suffice for the eastern provinces, which currently lack any railway at all.

The SRT said in September that 80% of land needed for the three-airport line has been secured for expropriation, and the Bangkok Post has reported that 3,000 houses will need to be demolished. Adding that gas and electrical lines may also be affected, Jittichai says, “it’s not easy to relocate people. Some are going to court and it takes quite a long time.”

Bangkok to Khorat in 77 minutes

Construction of the China-Laos railway is underway in Yunnan.

Expected to open in 2023, Thailand’s maiden HSR line is now under construction beside existing railway tracks in Nakhon Ratchasima, a northeastern province also known as Khorat.

Unlike on the three-airport line, Chinese state firms are responsible for nearly all of the construction.

Beginning at Bang Sue, this 157-mile “Khorat line” will stop at Don Mueang Airport and the historic capital of Ayutthaya before cutting northeast to Saraburi and Pak Chong near the popular Khao Yai National Park. It will terminate at Khorat — at least until the track is extended.

The government’s long-term plan is to extend the line north to Nong Khai, located 370 miles (600 km) northeast of Bangkok and home to a popular border crossing that enables travelers to reach the Lao capital of Vientiane. After crossing the Mekong River on a new bridge, passengers would be able to continue north on another HSR line now being built in Laos.

The ultimate goal is to link these lines with Kunming in southern China’s Yunnan province.

The Khorat line has drawn more criticism than the three-airport line due to the investment of 179 billion baht ($5.9 billion) worth of public funds.

Critics argue that northeast Thailand is not on the agenda for most tourists, while also expressing frustration about a lack of transparency when Thailand’s military government approved the project in 2017.

In a report first published by The Diplomat, Pechnipa Dominique Lam of the Thailand Development Research Institute estimated the line “would need to ferry 50,000-85,000 passengers every day for 20 years in order to pay back the costs of investment,” At only 5,000-25,000 riders per day, the Transport Ministry’s own forecasts fall well short of those numbers.

“Taking into account the benefits arising from the HSR, such as passengers’ time savings on travel,” she went on, “the economic case in favor of doing the project is still outweighed by its financial losses.”

“This line is mostly influenced by China,” adds Jittichai.

“If Thailand builds it, we might not get much benefit. But if we don’t build it, we could lose other benefits from China. That is what the government is thinking.”

Both the SRT and the state-run bus service have long been operating at a deficit.

“There is a strong risk that HSR might not be successful because of existing transport connectivity,” according to Ruth.

Both the SRT and the state-run bus service have long operated at financial losses as passenger numbers decline each year. The state-run airline, THAI, is also struggling as budget carriers like Air Asia and Nok Air compete with fares from Bangkok to more than 20 other Thai cities for as little as $20.

Critics also wonder if enough Thai people can afford HSR in a country with a notably wide economic divide and a minimum wage of only 300 baht ($10) per day.

Although most middle-class Thais can manage the proposed 330 baht fare for a bullet train from Bangkok to U-Tapao, and 500 baht to Khorat, many of them are attached to their private automobiles.

As for the working class, they may end up sticking to buses and vans that cost roughly a quarter of the proposed ticket prices for HSR. Regular trains are even cheaper and the coming dual tracks will shorten travel times on existing railway lines, adding another layer of competition.

While waiting for a train at Khorat’s 119-year-old railway station, Daeng Tungsunern, a Khorat native who sells second-hand goods, tells CNN, “I did not know about the HSR project until it was already being built. I will not use it because it will be too expensive for my budget.”

‘If looking at a broader network’

Expert says that Thailand’s high-speed train network may eventually connect to China, Singapore, or even to Central Asia and Europe.

In the future, Thanet envisions Thailand as a central hub in a Southeast Asia linked by bullet trains. He also sees value in the transfer of technology, suggesting that “20 years into the future, we should be able to produce high-speed trains ourselves and not only buy them from China or Japan.”

Jittichai agrees HSR could become worthwhile “if looking at a broader network, for example, if the Thai lines can be connected to the Chinese network or Singapore, or even to central Asia and Europe.”

To that end, the government is considering additional HSR lines running north from Bangkok to Nakhon Sawan, Phitsanulok and Chiang Mai; south through Hua Hin, Surat Thani and Hat Yai; and further east from Rayong to Chanthaburi and Trat near Cambodia.

Subsequent projects might extend the proposed southern line through Malaysia to Singapore, while a northern line could link with a western extension to Myanmar and onwards to India.

The SRT is already promoting these additional projects, but the extremely high price tags are likely to prohibit them from taking shape any time soon.

“If the cost of construction and technology becomes cheaper, that is when you will see these other lines,” says Jittichai.

Back inside Khorat’s railway station, Paitoon Tikul, a retired soldier who rides trains and his bicycle around Thailand to raise money for charity, says, “I think HSR will be useful for certain people. But the cost of these projects is very expensive, and I worry about corruption. In my opinion, it would be better to use that money for improving schools, hospitals and more useful things.”

As a roughly 50-year-old train clinks into the station, railway police captain Nutthawoot Sawanphomrat interjects, saying “I think HSR will be good for the country and the economy. Just like in Japan.”

This Just-Opened Boutique Hotel in The Adirondacks Has a Gorgeous Scandinavian-Inspired Aesthetic
Hidden Charms of Palm Springs
The 5 best neighborhoods in Guadalajara: the best areas to stay, eat and sightsee
K2 just had its busiest climbing season ever
The First Chilean Wine Producer To Score 100 Points Releases Over Decade Old Back Vintage