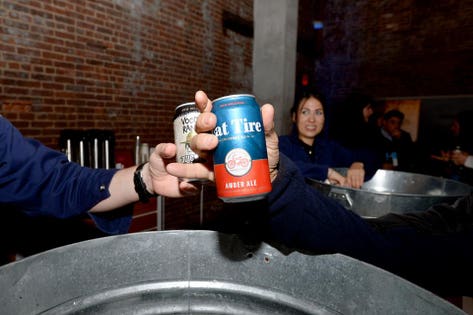 Specific financial terms of the transaction were not disclosed, but sources with knowledge of the deal said Lion would spend between $350 and $400 million to acquire the country’s fourth-largest craft brewery.

It’s the third time that the Fat Tire maker has transacted in the last two decades. Brewery cofounder Kim Jordan sold 41% of the business to an employee stock ownership program (ESOP) in 2000. Thirteen years later, the ESOP purchased the remaining shares owned by Jordan and other stakeholders.

The deal with Lion is expected to close by the end of the year, pending regulatory and ESOP shareholder approval, the company said via a press release.

Current New Belgium CEO Steve Fechheimer will continue to lead the company, and the company’s headquarters will remain in Fort Collins.

Jordan will also “remain deeply involved” in the business and continue to advise Lion as well as its global craft partners. In addition to Australia’s Little Creatures, Lion’s craft beer interests outside of the U.S. include Magic Rock Brewing Company in the United Kingdom and London’s Fourpure Brewing, among others.

Building a US Presence

Speaking to Forbes, Matt Tapper, the manager director Lion Little World Beverages, said the purchase illustrates the group’s ambition to build a portfolio of craft brands in the U.S.

“We are putting down a pretty significant stake in the ground in the U.S that is all about working with New Belgium over time to establish a leading craft beverage business in what is the largest craft beer market in the world by some distance,” he said.

Lion’s desire to construct a presence in a saturated U.S. craft beer market – there are now more than 7,500 craft breweries in operation – began taking shape in May when the group hired industry veteran Simon Thorpe to help develop its mergers and acquisitions (M&A) strategy.

Thorpe played a “critical” role in architecting the deal, Tapper said, noting that the two companies had been discussing a deal since the summer.

“A number of people have been on this opportunity for some time,” he said.

With today’s deal, Lion will also pick up another San Francisco-based beer company — Magnolia Brewing. That brewery is majority owned by a New Belgium subsidiary, according to beer industry trade publication Brewbound. Back in 2017, New Belgium, along with Belgium’s Brouwerij Oud Beersel and craft beer industry veteran Dick Cantwell (the cofounder of Seattle’s Elysian Brewing, which sold to Anheuser-Busch, and boyfriend Kim Jordan) acquired Magnolia out of bankruptcy for $2.7 million.

Meanwhile, Kirin itself holds a 24.5% stake in Brooklyn Brewery, the 12th largest craft brewery in the U.S. For its part, Brooklyn Brewery has minority stakes in San Francisco’s 21st Amendment and Fort Collins-based Funkwerks.

Those businesses will continue to operate independently, Forbes understands.

Notably, New Belgium’s 690 employee-owners will also participate in the transaction, after Lion pays off remaining debt that was incurred when New Belgium embarked on a $150 million secondary brewery expansion in Asheville, North Carolina.

In a blog posted to New Belgium’s website, Jordan said current and former employees that owned shares of the company via the ESOP will have earned $190 million over the course of its lifetime. She added that 300 employees will each earn more than $100,000, with some receiving “significantly more.”

Speaking to Forbes, Jordan said the financial demands of the ESOP played a role in the company’s decision to sell.

“We needed to have enough cash for the repurchase obligations and we were looking at the impending transactions with selling shareholders out into the future,” she said, noting that debt payments and a desire to increase its marketing spend also drove the company to a deal.

“It’s hard to do all three of those things,” she added. “How do make sure that we are the best, most vibrant New Belgium that we can be? Working with Little World Beverages was absolutely for us.”

Today’s announcement also signals that craft dealmaking has once again picked up following a nearly two-year period where many marquee buyers hit the pause button on spending.

Ownership over more than 2.6 million barrels of craft beer has already changed hands in 2019. Combined, the four largest announced transactions are valued at more than $1 billion.

In addition to New Belgium’s planned sale, three other top-20 craft breweries have announced deals in 2019, including:

In addition to those purchases, Oregon’s Ninkasi Brewing and Utah’s Uinta Brewing also sold earlier this year. A handful of smaller deals were also announced throughout 2019, and this year has arguably been the most active year for craft M&A since 2015, when more than two dozen craft breweries producing more than 2 million barrels were involved in transactions.

Speaking to those familiar with craft beer dealmaking, it’s understood that dozens of craft breweries ranging in size are still exploring sales and that additional deals could be announced before the end of the year. Craft beer M&A activity will likely accelerate in 2020, the also sources said.

The perfect cruise line for you, whether you want traditional entertainment or in-room sex kits
Business travel spending might not return to pre-pandemic levels until 2026
Walmart Jumps Over 5% After Solid Earnings And Further ‘Progress’ Reducing Inventory Levels
The 6 best neighborhoods in Indianapolis: a guide on where to find art, sports, Black culture and more
Tickets for Japan’s Ghibli Park now on sale