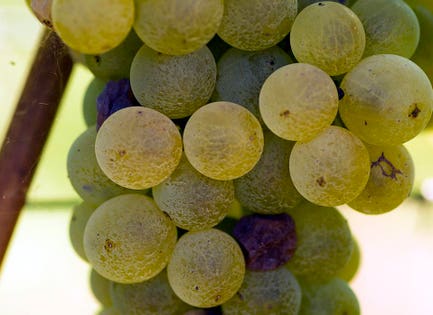 Today, Roero Arneis is one of Italy’s greatest success stories among the country’s white wines. But no one could have predicted this situation back in the early 1960s, when the Arneis grape was literally a throw away variety, one that had more value as food for birds than as a source of a wonderfully distinct Piemontese white wine.

Let’s go back to the beginnings of this story. In the 1960s, the Arneis variety was planted in between the rows of Nebbiolo throughout the Langhe and Roero districts in Piedmont. The reason for this was simple – this white variety would ripen sooner than Nebbiolo, and combined with its sweet aromas, it would serve as nutrition for the birds who could eat all the Arneis they wanted to, while leaving the valuable Nebbiolo grapes alone. In fact, the variety was not yet called Arneis at that time, but rather nebbia bianca – white Nebbiolo.

Luca Currado of the Vietti estate in Castiglione Falletto recalls the origins of Roero Arneis very well, as it was his family’s winery that is credited with producing the first example of Roero Arneis. His father Alfredo Currado, winemaker at Vietti, decided he wanted to make a white wine to complement his porfolio of local reds. He knew he did not want to produce Chardonnay or Sauvignon Blanc, but was intrigued by Nebbia Bianca, which usually was fermented and then later blended with Nebbiolo to make a rosé or in some cases, a sweet white.

Currado and his wife Luciana went to the nearby town of Monte d’Alba in 1967 to talk to a priest whom they knew was a big wine lover. They asked him to speak about this mysterious variety to local farmers who had planted a small amount in their vineyards. The idea was that the Currados would obtain as many of these grapes as possible at harvest time and then produce a few thousand bottles.

Luca remembers the priest telling him the story. “The priest started to talk to the growers about my parents and how they did a lot for the promotion of the area and its local wines. Then my father told the farmers, ‘If you are interested in making this type of wine, come to the square with your grapes.’”

The younger Currado recalls that in that first year, his father made 3000 bottles with grapes collected from 35 growers. He recalls one hilarious sight. “My father remembers one grower on a bicycle with a case of grapes in front of the bicycle. It was just like a Fellini movie!”

Currado recalls that his father wanted to make a slightly sweet wine in the mode of a German Riesling, as these were wines that his family loved (and still loves to this day). “But by mistake, the fermentation became dry,” he says. “So he forgot about this tank, just as you forget about things because you think you have made a mistake.”

The following spring the famous wine critic Luigi Veronelli came to Vietti and saw the tank with the word “Arneis” and inquired what that was. The elder Currado told him it was an experiment and thought that Veronelli would not be interested. But he was, and when they tasted it, the wine was beautiful. “It was absolutely in error that the wine came out in a dry style,” recalls Luca.

The wine became a commercial success, and today there are more than seven million bottles of Arneis produced in Piemonte every year. While there are some vineyards in the Langhe district (where famous reds such as Barolo and Barbaresco are produced), most plantings are in the Roero district, west of the Tanaro River and the Langhe.

The Roero zone is ideal for the Arneis variety, given the higher percentage of sand in the local soils. These sandy soils yield red wines that are lighter than those from the Langhe, so growers in the area take advantage of this to focus on the perfumes that Arneis delivers in this area; currently there are slightly more than 2000 acres of Arneis planted in the Roero district, as compared to 500 acres of Nebbiolo.

One of the most successful producers of Roero Arneis is Malabaila, an estate in Canale. Lucrezia Carrega Malabaila, one of the firm’s proprietors, notes that in the 1700s, Arneis was an important grape, but that it was vinified either as a sweet wine, or as a vermouth, with the addition of local herbs. “The Arneis wine we know today came only recently”, as she remarks. “In 1970 a group of Roero producers decide to invest in the Arneis grape and vinification in a dry style … we planted our first five hectares (about 12 acres).”

There are two versions of Roero Arneis at Malabaila both of which are aged only in steel tanks; Le Tre and Pradvaj, their signature offering. Le Tre is a blend of three vineyards with sandy soil; the vines are between 15-30 years of age. Malabaila points out the delicate minerality in the wine and recommends this wine be paired with agnolotti (a local pasta also known as plin) with butter and sage.

Regarding the Pradvaj, this is sourced from a single vineyard planted around 45 years ago; shells and fossils are found in these soils. “The Pradvaj has a complex, full sturcture and a very, very long finish,” she says. “It is definitely one of a kind each year.” For food pairing with the Pradvaj, she recommends rabbit, cooked slow with Arneis.

Other esteemed producers of Roero Arneis include Matteo Correggia; Cornarea; Bruno Giacosa, one of the early pioneers of this wine; Marco Porello (his “Camestri” offering from a single vineyard is a classic, with wonderful texture); Deltetto (their “San Michele” Arneis is aged in both steel and wood, and offers excellent complexity and richness); Malvirà, known for their remarkable single vineyard offerings, including Trinità, Saglietto and Renesio, this last, the source of one of the area’s truly stellar examples of Arneis; Monchiero Carbone, whose “Cecu d’laBiunda” is a full-bodied Arneis that can be enjoyed after ten years, and Giovanni Almondo, whose “Bricco delle Ciliegie” (hill of the cherries) is as complex and as varietally pure an example of Roero Arneis produced at any estate.

Malabaila Roero Arneis “Le Tre” 2018 – Aromas of pine, mango and yellow crocus. Medium-full with very good concentration. Beautiful varietal purity and freshness, with very good acidity and good persistence. Lovely balance, this is quite tasty and will be at its best over the next 2-3 years. Excellent