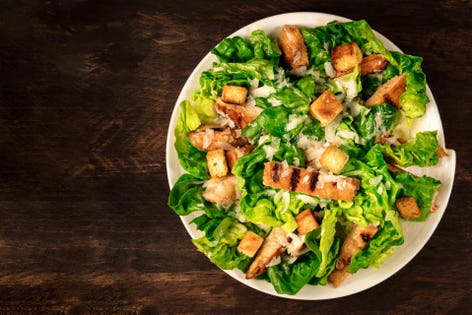 Lettuce not go through this again. Remember last year when tainted Romaine lettuce led to Escherichia coli O157:H7 outbreaks? Romaine then remained on the do-not-eat list for a while, as I covered for Forbes. Well, on Wednesday, the Centers of Disease Control and Prevention (CDC) announced that yet another E. coli O157:H7 outbreak is a-breaking. It’s already affected at least 17 people in eight states. Is this de ja poop all over again? Not exactly.

The culprit is not lots and lots of Romaine lettuce in general. At least for now, it’s only a specific lot of Chicken Caesar salad. The focus so far has been on Ready Pac Foods Bistro® Chicken Caesar Salads that have a “Best By” date of October 31, 2019, and are marked with the lot number 255406963. Here’s a tweet from the U.S. Department of Health and Human Services with a picture of the product:

As you can see by the U.S. Food and Drug Administration (FDA) tweet below, as of November 18, there had been seven cases in Maryland:

That’s swelled to a total 17 reported cases that now includes Arizona, California, Colorado, Idaho, Montana, Washington, and Wisconsin as well. The earliest reported illness started on September 24, 2019, and the latest to date on November 8, 2019.

Poop is just one potential problem with swallowing E. coli O157:H7. O157:H7 is not your friends strain of E. coli. It is your “O’ bleep” type of E. coli. As I have described previously for Forbes, the most common result is about five to ten days of bad stomach cramps, vomiting, and bloody diarrhea. This is certainly not a fun thing to have, but much worse things can happen.

About 2% to 15% of those infected progress to something called hemolytic uremic syndrome (HUS), according to a publication in the journal Emerging Infectious Diseases. HUS is a poop-load of trouble. The bacteria secretes a toxin called Shiga toxin. If this toxin gets into your bloodstream, it can damage and cause inflammation in the small blood vessels in your kidneys. These can lead to clots forming in these blood vessels and then eventually to kidney failure. Kidney failure can then cause all sorts of problems, including death, which is a bad problem to have.

Kids under five, adults over 65 as well as kids over 65, and anyone with a weakened immune system are more likely to develop HUS. So far, no deaths have occurred in this current outbreak. However, at least seven hospitalizations have resulted with two of them from HUS.

If you have a Ready Pac Foods Bistro® Chicken Caesar Salad that matches the description above, don’t even try to eat it. You don’t want to play diarrhea roulette, and you certainly don’t want to risk HUS. Instead get rid of the salad or return it to from where you bought it. Getting rid of the salad doesn’t mean feeding it to someone else but instead discarding it in a safe place far from anyone’s mouth.