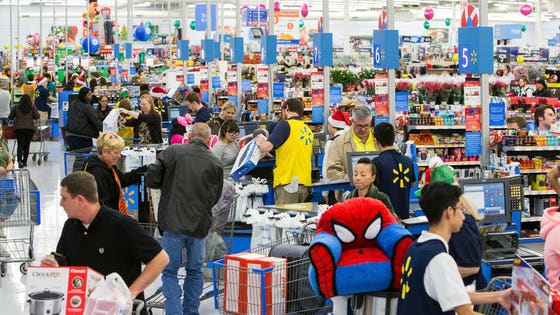 It’s nearly Thanksgiving, when multitudes of American shoppers will end the feast early to shop at Walmart, which once again is kicking off the holiday shopping season on Turkey Day. New YouTube videos of crazed shoppers fighting over discounted TVs are sure to follow. But today I’ve come to praise Walmart, not bury it with criticism. Recently, the world’s largest retailer (with $514 billion in revenue) made a few surprise moves that are worth noticing, celebrating and emulating for other companies large and small.

That’s quite a change from the past few decades, in which Walmart took heat for paying low wages, encouraging employees to get on food stamps, selling too many guns, strong-arming suppliers into product sizes and price points they don’t like, and kicking off Black Friday on Thanksgiving.

But this year the retailer has been behaving as if it has had a visit from Marley’s ghost, Charles Dickens’ character in “A Christmas Carol,” who in the afterlife gives his old business partner (Ebenezer Scrooge) a shot at redemption. After shootings at Walmart stores in Texas and Mississippi in August, the mega-retailer stopped selling ammo for large-capacity clips and handguns, and exited the handgun market completely. In a Sept. 3 letter to Congress, Walmart called for stronger gun laws and said it would discourage open carry at its stores. It previously stopped selling military-style rifles and ammo, raised the minimum age for buying guns and strengthened background checks.

Walmart has moved on the environmental front, too. Early this month, the company criticized the Trump administration’s decision to pull out of the Paris Climate Accord, proclaiming it is “still in” on combatting global warming. Walmart has set a long-term goal of using 100% renewable energy, with a benchmark of 50% by 2025. It has raised hourly wages and expanded maternity benefits for employees. And to improve its customers’ health, the retailer has been testing a new comprehensive Health Center at a store in Georgia. The location provides urgent care, primary care, lab testing, X-rays and diagnostics, counseling, dental and optical care, and hearing services under one roof.

These developments are significant because Walmart is the latest corporate behemoth – along with companies such as CVS Health and Unilever — to take a stand on social issues, address its role in social problems, and move forward to correct them. This is both the right thing to do for society and good business in a world where consumers increasingly consider both their hearts and their wallets in purchasing decisions.

These companies have substantial power in moving the needle on solving societal problems because of their marketplace clout and influence over other companies. Consider that after CVS Health pulled cigarettes from its stores in 2015, cigarette sales dropped by 95 million packs in 13 states. Smokers who shopped at CVS stores exclusively were 38% less likely to buy tobacco. We need more big companies to step up like this.

Walmart CEO Doug McMillon explained at the company’s 2018 shareholder meeting its need to change its business and culture. “At some point, Walmart became big and societal expectations changed, and we missed the memo,” he said.

“At some point, Walmart became big and societal expectations changed, and we missed the memo.”

Like CVS and Unilever (which is jettisoning brands that don’t serve a higher purpose than making people look better), Walmart is taking stands that may make it unpopular with some customers. But by doing so, it hopes to attract the growing number of consumers who care about health and social issues such as the environment and climate change.

It’s no secret that Walmart covets higher-income consumers. Its average shopper has an annual household income of $56,482, according to research consultancy Kanter Retail, and this core base is shrinking. The customers of Walmart competitor Target are younger and make an average of $13,000 more, and the number of $100,000-plus households is increasing. To attract those kinds of customers, Walmart partnered in 2018 in an e-commerce platform with Lord & Taylor. It also hired a former Ralph Lauren and Saks Fifth Avenue executive (Denise Incandela) as its digital fashion group head. And Walmart acquired 125 upscale online fashion brands.

But Walmart wisely recognizes that consumers want to shop at companies that not only offer the items they want but also make them feel good about where they buy. Younger consumers care deeply about fair pay and social issues like gun control and protecting the environment. Better-educated consumers tend to be more concerned about climate change. Other companies should follow Walmart’s example and walk their talk.

To make a profound difference in the societal issues that their customers care about, big companies need to step up, own the problems surrounding the products they sell and, most importantly, move to fix those problem. Here are three lessons Walmart has learned:

So perhaps the Thanksgiving dinner table is a good time for social activists and other socially conscious consumers to begin rethinking their aversion to Walmart’s business practices. Of course, it’s on Walmart to do what it professes to be important. But if its public pronouncements are genuine, Walmart will provide a blueprint for every company that wants to win over the growing number of customers who care about more than just the price they pay for products.

Why Opopop Believes They Can Reinvent Popcorn
9 of the best places to swim and cool down in Kraków: water sports, lakes and city beaches
A Luxury Travel Blend: Overseas Network and Qatar Airways at FIFA 2022
The diamond-inspired superyacht concept with an on-board ‘waterfall’
15 epic hikes in Australia and New Zealand among volcanoes, rainforests and more