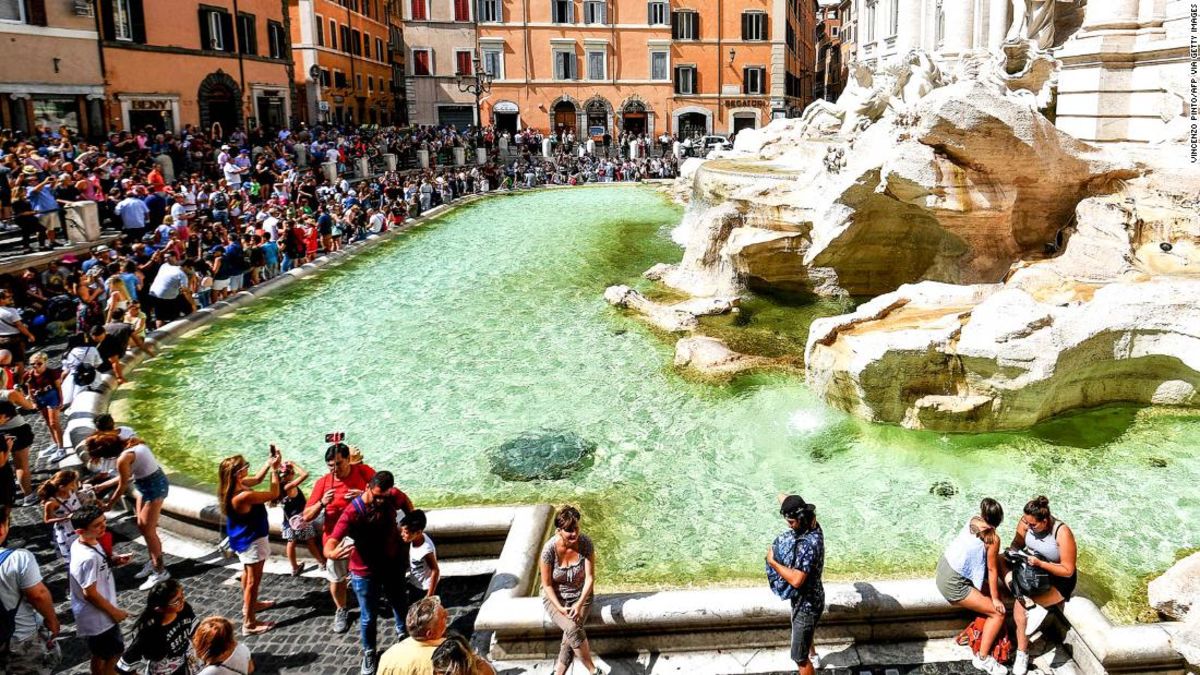 (CNN) — Ever since Anita Ekberg and Marcello Mastroianni cavorted in its waters in “La Dolce Vita,” the Trevi Fountain has become a symbol of Rome.

But its extraordinary popularity with tourists seeking their own slice of the sweet life has led to the fountain — and the tiny piazza in which it sits — becoming almost permanently overcrowded.

Now, four months since a local restaurant owner called the area “disgusting,” one politician has a novel idea about how to protect it: by erecting barriers.

Andrea Coia, president of the business committee of Rome’s city council and a member of Italy’s self-billed anti-establishment Five Star Movement, has put the proposal to the wider city council. He suggests a “protective barrier” that would “prohibit people sitting on the edge of the fountain.”

His motion of November 15 calls the Trevi Fountain a symbol of Rome, along with Piazza di Spagna (the Spanish Steps), the Colosseum and Via dei Fori Imperiali, which runs alongside the Roman Forum, from the Colosseum to Piazza Venezia.

“Rome is one of the richest cities for culture in the world, and a heritage like this must be respected and protected,” his motion reads. “We need to favor a more respectful kind of tourism in the city’s symbolic places.”

Currently, the fountain sits slightly below the square. Visitors must climb down steps to reach it — but they normally take up residence on the steps, or perch on the fountain’s edge.

Coia’s motion says that police are already instructed to ban tourists from sitting on “symbolic monuments,” and therefore his suggestion would free up police — who are constantly having to prevent visitors from leaping into the fountain or doing other illegal things — to concentrate instead on illegal street vendors in the vicinity.

He has also suggested installing fixed police checkpoints in areas leading towards the Trevi Fountain and the area around the Colosseum, and introducing continuous foot patrols along the surrounding roads — partly to deter illegal vendors, but also to monitor visitor behavior.

His proposal has been submitted to Rome’s authorities.

“I put forward the motion because the symbolic places of our city need more control and attention,” Coia told CNN Travel, adding that his suggested Trevi Fountain checkpoints would be on the access roads “to safeguard decorum and security.”

He said that the measures would “safeguard one of the world’s most beautiful places and assure a better experience for those who want to enjoy it.”

Italy’s Ministry of Cultural Heritage, which would have to agree the plans, did not respond to a request for comment.

The fashion house Fendi might have something to say about any plans, too. In 2016, it paid to have the fountain restored. Even today, there’s a discreet Fendi plaque at the side.

Italy is struggling with ever-increasing numbers of visitors in many destinations, with locals in Venice regularly protesting against “hit and run” tourism and authorities in Florence launching campaigns to teach tourists how to behave.

Pot-smoking tourists not welcome in Thailand, says health minister
How to get around in Michigan
9 of the best scenic hikes in Michigan
Enjoy A Cult Beer…And Get Paid $10,000 To Watch A Sunset With That Beer In Hand
The rail journeys that Telegraph readers will never forget