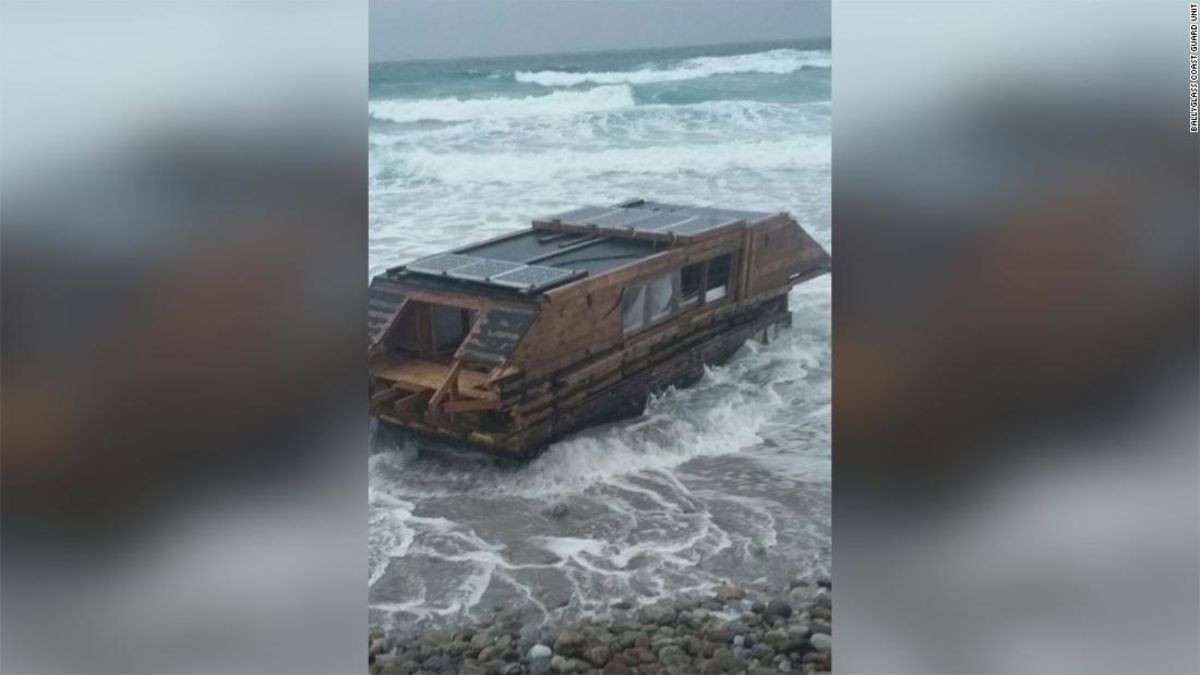 Travel
Share on Facebook
Share on Twitter
Share on Pinterest
Share on LinkedIn
(CNN) — When a solar-powered wooden houseboat was found washed up on an Irish beach, locals were puzzled.
Three years later, they have finally got to the bottom of the strange vessel’s origins — and traced the boat’s original owner almost 2,000 miles (3,200 kilometers) across the Atlantic, to Newfoundland, Canada.

The mystery began in 2016 when a local in County Mayo, western Ireland, discovered the boat on the beach at night. “We had received a call from a member of the public to say that a caravan type vessel had been washed ashore on the west side of the Mullet peninsula, near Drum beach,” Michael Hurst, officer in charge at Ballyglass Coast Guard Unit told CNN.

The “contraption,” Hurst said, was made of wood and was kitted out with solar panels and kettles.

The mysterious boat was kitted out with solar panels and kettles.

“It looked a little bit like a caravan. In the water, it seemed just a strange looking object really,” Hurst said.

Even more mysteriously, a message was written within the vessel: “I, Rick Small, donate this structure to a homeless youth. To give them a better life that Newfoundlanders chose not to do! No rent no mortgage no hydro.”

After checking no one was aboard the vessel, Hurst posted about the boat to Facebook. By the next day he was inundated with calls from local media, and was contacted by many interested and puzzled locals.

“There was a lot of interest in it, something strange like that coming up on the shore,” he told CNN.

Inside the boat was a mysterious inscription.

After no one claimed the boat, and with Rick Small nowhere to be found, members of the coast guard unit and the local community refurbished the vessel and donated it to a community sensory garden in nearby Binghamstown.

The origins of the vessel remained a mystery for three years, Hurst said, until he received a message on Thursday from a journalist who told him he had solved the puzzle once and for all. The owner of the abandoned boat, according to Canadian Broadcaster CTV, is 62-year-old inventor Rick Small.

In an interview with CTV, Small, said that he built the solar boat to raise awareness of climate change.

“[I was going to] go from Newfoundland around the Arctic to here in the summer,” Small, who has also invented solar-powered bikes, told CTV. “To show that the ice is disappearing.”

Unable to find the correct motor for his trip, Small told CTV he gave the boat away in Newfoundland, and had no idea how it made its way across the Atlantic.

Robinhood, Carvana And More—These Stocks Are Surging After Announcing Cost Cuts
French mayor wants Mont Blanc climbers to pay €15,000 rescue and funeral deposit
The 5 best neighborhoods in Guadalajara: the best areas to stay, eat and sightsee
Stocks Under Pressure Despite Strong Jobs Report As Investors Fear Bigger Fed Rate Hikes
What the ‘golden age’ of flying was really like