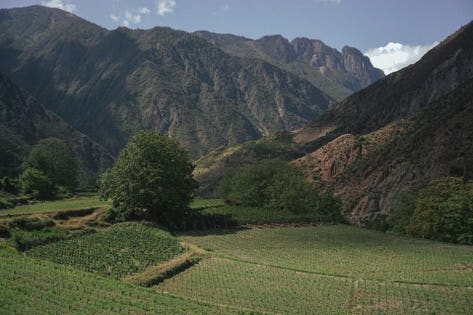 As climate change threatens classic regions, a topic I reported on several years ago for Punch in “Can the Mosel, Burgundy and California Keep Pace with Climate Change?”, it’s reasonable to expect wine producers to seek new sites. Couple that with China’s growing demand for wine, and you’ve got a perfect scenario for exploring untested terroirs at different elevations in the vast East Asian country. But can – and should – a wine without pedigree debut at $300 a bottle? That’s the premise of the Chinese Bordeaux-style dry red Ao Yun.

The name Ao Yun means “flying above the clouds;” it’s a reference to the vineyard’s location beneath Meili mountain in China’s Yunnan province near Tibet. I’ve been to this region. In fact, I was there while the vineyard was being groomed but had no awareness of it at the time.

Yet, I’ve spun the giant golden prayer wheel of Shangri-La. I’ve watched the devout painstakingly prostrate themselves around Songzanlin Monastery, the largest Tibetan Buddhism Lamastery in the province. I’ve sucked the thin air, felt the warmth of the unfettered sun, listened to prayer flags flutter in the wind, and seen the brilliant blue skies that felt so close to heaven. It’s remote, rugged, open and beautiful. I can imagine a vineyard there.

Indeed, so too could Moët Hennessy, backers of the project, and Maxence Dulou, winemaker and estate manager hailing from Bordeaux, naturally.

Topping out at 2600 meters above sea level (that’s 8500 feet; Denver is 5280), Ao Yun’s vineyards span nearly 500 acres with 314 plots managed by over 120 Tibetan farmers. Big. Ambitious. Expensive. Remember, this area is remote and has never been planted with Vitis vinifera grape vines. A point to recall when pondering price.

The area itself boasts three large rivers divided by mountain ranges reaching up to 22,000 feet. The vineyards are spread across four villages—Adong, Xidang, Sinong, and Shuori—which serve as homes to farmers who tend everything by hand.

The first vintage, 2013, was a blend of Cabernet Sauvignon and Cabernet Franc. On October 1st of this year, Ao Yun debuted its third vintage, Ao Yun 2015, based on the same duo of Bordeaux grapes.

Apparently, 2015 was the warmest and driest vintage of the trio. Though three years of data points aren’t enough to declare a climate trend, those two little adjectives — “warmest” and “driest” — deliver an uncanny reminder of scientific predictions for the world’s future.

I didn’t taste the prior vintages, but I sampled the 2015. I even had the opportunity to sip from the proprietary glass crafted by crystal maker Riedel. In a statement put out by the Ao Yun PR team, “Maxence Dulou, Winemaker & Estate Manager of Ao Yun worked meticulously with CEO and owner George Riedel to identify the optimal shape, revealing the multi-layered and complex aromas of Ao Yun’s signature Cabernet Sauvignon and Cabernet Franc blend.”

As a Master of Wine student, I approach every wine with the same question: where would I imagine this wine to be from based on acid, tannin, structure, texture and fruit character. Of course, I knew Ao Yun’s origin to be China, but if I tasted it blind, what would I guess?

I take in the aromatics. Spice, sandalwood, earth. Faint trails of smoke. Black fruits. More brooding than buoyant. A wine for a winter night by the fire. On the palate, firm but fine tannins. Not plush but tasting of time in oak for roundness and resolution. There’s acid and tension. A hint of green pyrazine, like the prick of a pine needle, that hints at Cabernet grape varieties. There’s also a bit of edge. Steely graphite. The swipe of pencil lead across the tongue. It’s well made. Tastes complete. Has purpose. I’ve sampled Chinese wines in the past and they taste nothing like this. So, I’d guess Left Bank Bordeaux, somewhere in the Médoc, not Margaux, but I’d refrain from betting.

Would I pay $300 for this wine? On a journalist’s budget, no. But if I were someone with a serious interest in fine wine and commensurate bank account, who wished to support research and development in new places like the Himalayas considering the terrifying prospect of losing the classics to a changing climate — absolutely.

Ao Yun proprietary Riedel glassware is available on Clos19.com for $190 in a set of six glasses.

‘Unsustainable and shambolic’: Flight attendants speak out on summer travel chaos
Hong Kong cuts hotel quarantine for travelers to 3 days, plus 4 days of home medical surveillance
This Just-Opened Boutique Hotel in The Adirondacks Has a Gorgeous Scandinavian-Inspired Aesthetic
Hidden Charms of Palm Springs
The great unrest: How 2020 changed the economy in ways we can’t understand yet