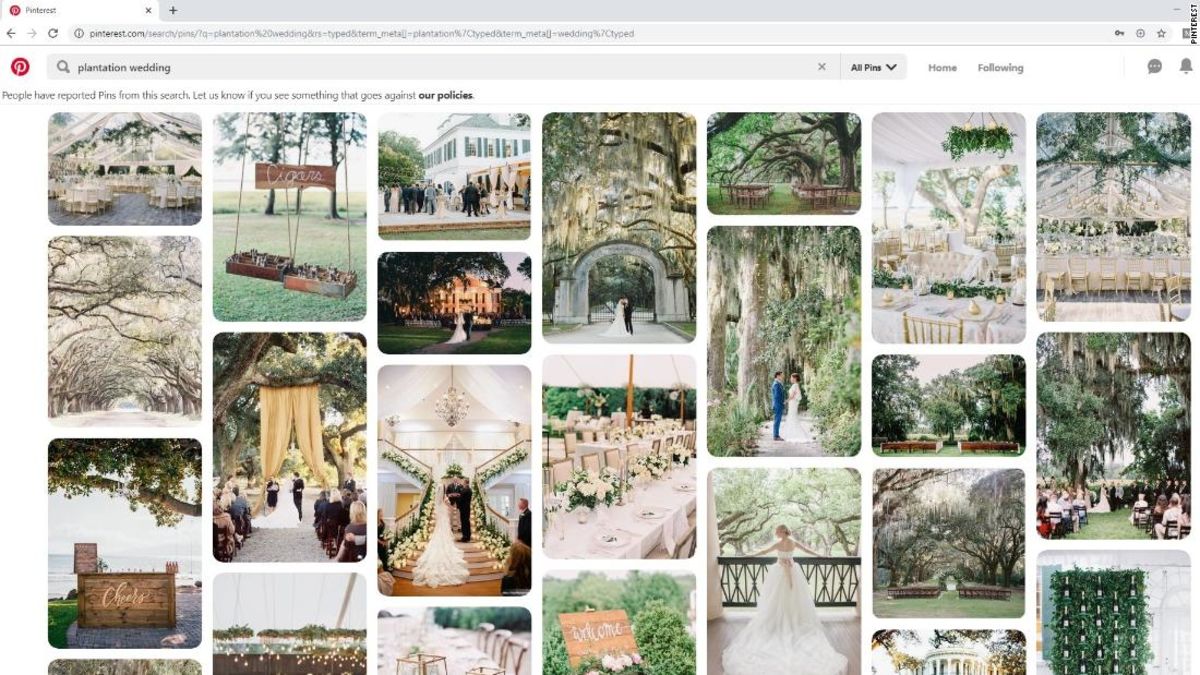 (CNN) — In response to urging by a civil rights advocacy group, Pinterest and The Knot Worldwide, which owns prominent wedding platforms WeddingWire and the Knot, recently announced they were changing the way they feature wedding venues that romanticize former slave plantations.

Within days of the news, two other major wedding sites, Zola and Brides.com, announced they were following suit.

The shift is a welcome change for some in the industry, as well as activists who see the trend of plantation weddings as tone deaf at best, and outright offensive at worst.

However, there’s no denying that the prototypical elements of Southern charm, so often echoed in the aesthetics of plantation weddings, are still enduring themes in modern wedding fashion.

How will these changes actually play out, and could they be a signal of a greater cultural shift?

What companies are doing

Now, when users search for plantation wedding content, they will see a message about the company’s policies.

All of the companies making the change said they had or are planning to have conversations with Color of Change, a civil rights advocacy group that has appealed to several wedding industry tastemakers to reconsider their promotion of the plantation aesthetic.

Pinterest told CNN that it has limited the distribution of plantation wedding content across its platform by removing related words from search recommendations and auto-complete features. Pinterest also says it has taken steps to make sure ads will not appear in plantation wedding-related search results on the site or accept ads from these venues.

The company says people will still be able to search for the content, but the search feature now displays a message that says the content may violate its policies.

The Knot Worldwide has confirmed it will create new company guidelines to address the issue on its site but is still working on finalizing these new policies. The company told CNN it aims to roll out these new guidelines soon.

Zola, a site that allows couples to create their own custom wedding registries and organize their wedding details online, said it will “not allow vendors to list who are plantations.”

A spokesperson from DotDash, the parent company of Brides, told CNN they will be working with Color of Change on a strategy to limit content.

The organization behind the movement

The Melrose Plantation in Melrose, Louisiana

While it’s pretty significant to see so many industry leaders pursuing this policy change in such a short period, the problems with plantation weddings have long been a topic of contention.

Jade Magnus Ogunnaike, the senior campaign director at Color of Change, told CNN she has been seeing conversations expressing concerns about this trend for a while.

“Folks [talk on social media] about how absolutely awful it is that the spaces where our ancestors were beaten and enslaved and raped and forced to work have been celebrated and turned into romantic or whimsical places to get married,” Magnus Ogunnaike said.

In October, Color of Change sent a letter to six industry leaders, expressing their concerns about the use of plantations as a marketing tool and urging them to change their policies to stop this practice.

The letter was sent to Pinterest, Martha Stuart Weddings, Zola, Brides.com, The Knot, and WeddingWire.

As media coverage of the companies’ policy changes has grown, Color of Change confirmed that Zola and Brides have also contacted them.

The reality of plantation life in the American South, circa 1875.

The multibillion-dollar wedding industry encompasses caterers, retailers, planners, photographers, florists, decorators and venue owners, all selling a dream of perfection and eternal happiness to couples with stars in their eyes and a dollar to spare.

If those couples dream of exchanging vows on the steps of a stately Southern mansion or in the dappled shade of a cypress grove, plantations, on their surface, fit the bill.

In fact, many former slave plantations market themselves specifically as wedding venues, using romantic language to play up the beauty and grandeur of the locales while downplaying or ignoring the dark histories they hold.

Whitehall Plantation in Jefferson, Louisiana invites guests to “journey back in time to a more sophisticated era.” The website for Stella Plantation in Breathwaite, Louisiana, describes the venue as “rich with history and tradition,” combining “heritage and contemporary sophistication.”
Cumberland Plantation in New Kent, Virginia is described on its website as having a “splendid and eventful past,” and an “exceptional destination for anyone seeking a taste of the rich history of the South.”

CNN has reached out to these venues for comment but has not received any responses.

Wedding tastemakers, from planning platforms to stylish magazines, echo this language. Countless “Best of” wedding venue lists include florid descriptions of plantations and the romantic possibilities they allegedly hold. That’s why Magnus Ogunnaike says her organization chose to focus on popular wedding media.

Some former slave plantations, however, have bucked the trend. Whitney Plantation, located in Edgard, Louisiana, explicitly prohibits wedding and engagement photography on its grounds. Today, the plantation houses a museum with an exclusive focus on the lives of the more than 300 people that were enslaved there during its operation.

Since the problem of plantation weddings is one of aesthetics over history, it’s no surprise the term “plantation” itself becomes a bit misty in the process.

Several of the companies considering policy changes specifically mentioned the disconnect between the perceived romanticism of plantations and the what they truly represent.

“Weddings should be a symbol of love and unity. Plantations represent none of those things” a Pinterest spokesperson told CNN.

“The use of language that romanticizes or glorifies a history that includes slavery on any venue will not be allowed,” a Knot Worldwide statement provided to CNN reads.

One of the most famous plantations in the country, President Thomas Jefferson’s Monticello home in Virginia.

Some wedding industry members that have been expressing concern over plantation weddings for years, but it can be hard to speak out in an industry that is so often enamored with antebellum aesthetics.

Since diving into the wedding planning business in 2017, Allison Davis, the founder of wedding and event planning company Davis Row, says she understands a lot of Southern couples are looking for the sprawling acreage, stately architecture and Gone With the Wind-esque imagery a plantation provides.

However, she finds it hard to reconcile the fact that these couples would celebrate their love in a place where people were once violently enslaved.

“Using the term plantation as a marketing tool and as a way to draw people into your business and create this idea that is just a long list of positive traits, I can’t work with that. It just doesn’t make sense to me,” she said.

“There’s no reason why the word plantation should be used to evoke some sort of positive feeling and the thought of a place for celebration because it’s the exact opposite to so many people.”

In an industry that touts tradition and is largely based on vendor networks and referrals, speaking out against popular venues or turning away clients can be a huge risk. Davis says she knows fellow wedding planners that have been negatively impacted by speaking out against plantation venues. She said that one of her colleagues, an African American woman, has had difficulty handling requests from clients to plan a wedding at a plantation.

For Davis and others concerned about the glorification of antebellum life, recent talks of change among large industry leaders provides a lot of hope.

Magnus Ogunnaike said her organization is pleased to see the companies implement changes so swiftly after Color of Change sent its initial letter. The advocacy group says it will continue to work with the companies on improving their policies.

“We view them as industry leaders and incredible steward of corporate responsibility,” Magnus Ogunnaike told CNN. “We’re excited to move forward with the partnerships and see how we can advise them on issues that do affect black people.”

The great unrest: How 2020 changed the economy in ways we can’t understand yet
Nearly half of Singaporeans want to travel to one place – and it’s not Malaysia
Ibiza Gran Hotel Ushers in Gastronomy Revival with Two New Restaurants and Night Club
This Chinese province set a 9% GDP target — but then it locked down
Hidden Charms of Palm Springs