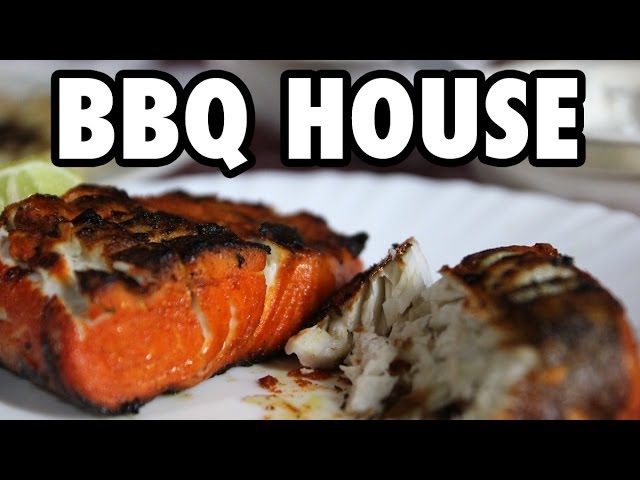 Nearly every time I fly into Dar Es Salaam, Tanzania, one of the first dinners we eat is at Barbecue House, they serve consistently delicious food. The long standing restaurants located in the Upanga area of town has stood the test of time, offering up local Tanzanian barbecue favorites for years and years now. In the daytime, the restaurant appears to be nothing more than a residential home. But beginning at about 5 pm of so, the barbecue grills are rolled out to the front, the gates open, and some tables are placed outside along the sidewalk. Located just a few blocks for the sea, Barbecue House gets a nice nightly breeze that cools one off when you’re eating marvelous food.

Ok, so now on to the food at Barbecue House restaurant in Dar Es Salaam. One of the most popular items on the menu is their barbecue chicken. It’s similar to an Indian tandoori chicken, marinated in an assortment of red spices and colorings, but instead of being cooked in a clay tandoor oven, the chicken is instead cooked over hot charcoal. But first things first, one of the best reasons to go to this restaurant is to first eat the cabbage salad which they served. Now the cabbage is nothing out of ordinary, it’s just thinly sliced cabbage. But the best part about it is the incredible array of sauces that they serve at Barbecue House. There’s a green chili sauce, a red chili sauce, a sweet and sour tamarind sauce, and my all time favorite, the fresh coconut chutney. Also for starters, I normally get a plate of hot samosas, served with either vegetables or meat or chicken inside. Their samosas are excellent, but again, it’s all about that coconut chutney on top that really makes it unbelievably spectacular.

For main course, we ordered barbecue chicken, the spicy version. It was pleasantly spicy, cooked to perfection and nice and juicy. I also decided to order a piece of fish, a nice chunk that I believe was red snapper. The fish was marinated in the same red goodness and then placed over the barbecue. To complete the meal, there are both chips (French fries) or a bread known as ajam to order. It’s kind of like a naan, but it’s a little more on the spongy side – kind of like a pancake. It’s first fried in a pan and then placed on the barbecue to gain that extra smoky flavor.

Barbecue House is one of my best restaurants in Dar Es Salaam, Tanzania, and it’s must visit when you go to Tanzania. Enjoy!

Again, here’s the full link to the article so you can eat here to: http://migrationology.com/2013/10/barbecue-house-restaurant-consistently-delicious-food-in-dar-es-salaam/

Famous Super Tuscan Wine Producer Brings Tuscany To New York City While Displaying Age-Worthy Quality Through Verticals
Fed Still Has A ‘Long Way To Go’ As It Tries To Tame Inflation Without Causing A Recession, Goldman Predicts
Please do disturb – why this country with no private paths is a hiker’s paradise
The 15 most amazing places to visit in Thailand: from glittering temples to golden beaches
20 things to know before visiting Kraków