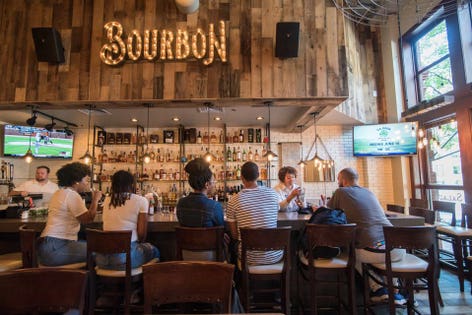 In the past decade, good brands went from available to allocated and from $15 to $40. Now, bourbon fans grow angry over their inability to find precious gold they once regularly consumed. They find themselves waiting in line and participating in lotteries for the likes of Weller Antique, which once collected dust on the shelf.

But there’s so many wonderful bourbons available. For this reason, I started selecting a Best Everyday Bourbon. Last year, I tasted a dozen bourbons that were widely available and selected Ezra Brooks 7-year-old Cask Strength. (Read the recap.)

This year, as I did last year, I solicited nominations from Bourbon Pursuit listeners, who are an engaged bourbon consumer base that understand what “everyday” truly means. For my qualifications, I limited them to products under $40, available in the majority of the states and it could not be a limited edition.

I assessed all nominations, validated them and tasted them live on YouTube to select my 2019 favorite for Best Everyday Bourbon.

This is typically a cornbread-laden favorite of mine. Going into my tasting, I thought this had a great chance of winning. But this blind tasting was not its day. It did not make my Top 6.

There’s no way around it, Wild Turkey 101 is great for the money. And it’s a bartender’s dream for its mixability. But the truth is, in a pinch, this is a great sipper. I’ve always found a bright nutmeg note, which can really stand out in blind tastings. Perhaps that’s why it was in the running to win it all.

In my past blind tastings, Old Grand-Dad did not fare well. I had always found an over-oaked note here. Going in, I didn’t give this much of a chance for my palate. Boy, was I wrong! It made my Top 5.

This is another nutmeg-forward bourbon I thought could standout in blind competition. But it was not in the cards. It didn’t make the cut for the finals.

Old Forester packs a banana note that I thought could dominate the competition if I happened to be in a banana mood. Unfortunately, for Old Fo, I was not.

I have always found a peanut butter note in this bourbon, and that can be incredibly enticing during a blind tasting. I didn’t find this note, however, and it failed to impress in the field.

Early Times had already won a blind tasting with me previously, having captured gold in the Bourbon Pursuit blind BIB Showdown. Once again, this wonderful bourbon was in the running to win it all.

Russell’s Reserve has been hitting my sweet spot of late, and many, including myself, thought this would definitely be in the running. They were right.

While Eagle Rare made it through the nomination stage, when it come to buy at the retailer, Westport Whiskey & Wine did not have it. So, we switched Eagle Rare to its sister brand, Buffalo Trace, which always warms up my palate in the winter. Could this be its year?

The original nomination was Weller Antique, which is widely available in some markets and sparse in others. So, I switched it to Evan Williams Bottled-in-Bond, a very widely distributed bourbon from Heaven Hill. Little did I know, this substitute would play a big role in my blind tasting.

I buy this product more than anything else on this list. You’d think that would make it a shoe-in to win my blind tasting. Quite the contrary, I didn’t care for the whiskey in the blind tasting. But that is why I taste blind: I don’t want to be influenced by brand name.

Look, I know Jack says Tennessee whiskey on the label, but there’s an argument made for it being bourbon. That said, I felt strongly Jack Daniel’s puts out worthy whiskey and deserved to be in this Best Everyday tasting. So, I added it. As it turns out, it came in my top 10.

Maker’s Mark could double their price and people would still buy it by the case. They deserve to be on every Best Everyday Bourbon list for their massive fan base alone. Of course, it’s pretty good, too. I usually find Maker’s Mark to be sweet. In this blind tasting, I picked up a cornbread note and thought it to be too young to make my Top 5.

A rich and savory beast.

A beautiful marzipan note came to life in the blind tasting.

The biggest surprise of the blind tasting since I had previously disliked it.

So funky, so rich with cornbread and a honey butter, the only reason it did not win this tasting was it lacked the finish of the winner.

This was so complex, with a 20-second finish and layered in vanilla that it was easily the winner. It now goes on to compete for Best American Whiskey.

It’s important to note that this was just one taste off, and I am one taster. If I tasted this flight again, there’s a very good chance I’d have different results.

But I feel very firm in the Top Five, and I was pleased to see three bottled-in-bond bourbons in the running.

It’s also worth noting that Wild Turkey had two—Wild Turkey 101 and Russell’s Reserve—in the running to win it all.

But this victory goes to the sister product of Henry McKenna 10-year-old, which won Best Whisky and Best Bourbon at San Francisco World Spirits Competition, and will compete against McKenna for my Best American Whiskey December 20.

Fred Minnick is a longtime American whiskey writer and author of multiple bourbon books. Subscribe to his YouTube Channel to watch his Best American Whiskey taste off December 20. In addition, Minnick is the editor-in-chief of Bourbon+ Magazine and host on the Spirits Network. Sign up for his free drinks newsletter.

The 5 best neighborhoods in Guadalajara: the best areas to stay, eat and sightsee
Kraków’s best neighborhood (and the other four you should visit too)
McDonald’s Unveils Ukraine Reopening Plans After Spurning Russia
The diamond-inspired superyacht concept with an on-board ‘waterfall’
The Idle Rocks Is Cornwall’s Best-Kept Culinary Secret