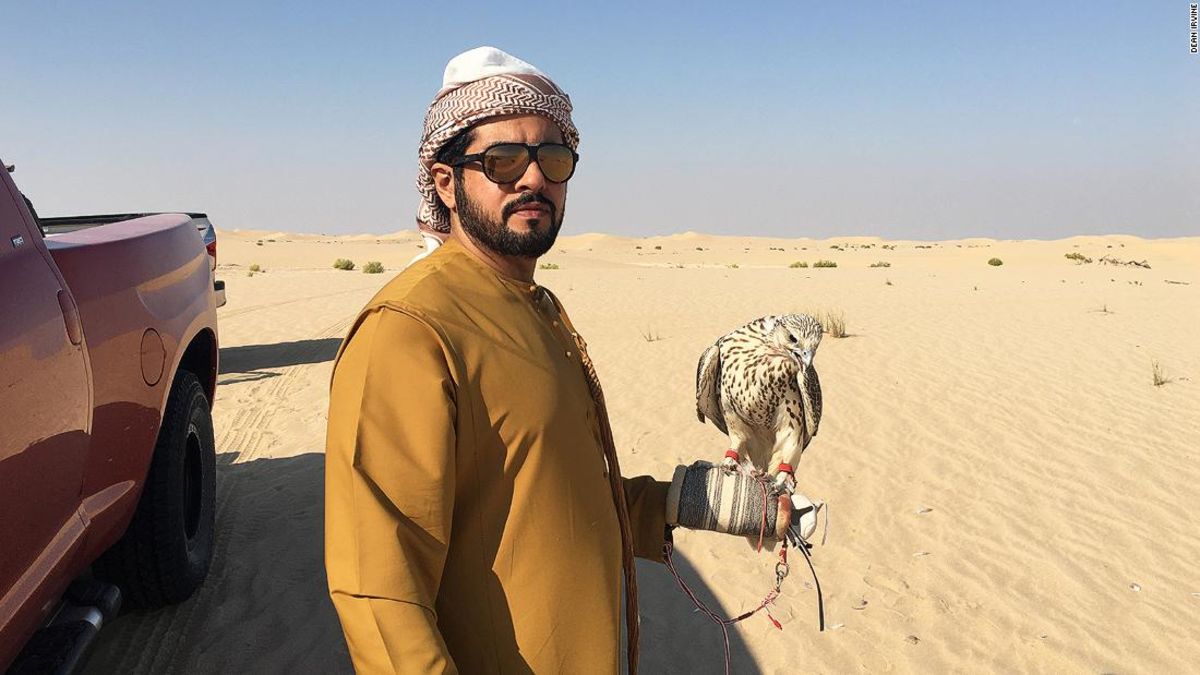 (CNN) — Twelve-year-old Mohammad is the first to spot the tracks.

Jumping from the SUV driven by his father, Ali, he races a few yards over the desert sands and follows them toward a small, scrubby bush. “Rabbit,” he says with a grin, pointing to the animal camouflaged against the grayish-yellow sand. And then with an even wider smile, “He’s going to be dead.”

With the prey sighted, sitting on the back seat of the SUV is the predator, a falcon, ready to be released and to confirm Mohammad’s prediction.

This is hunting with falcons in Abu Dhabi, an ancient tradition surviving in the modern era and now accessible to visitors who travel to the Emirate seeking a more visceral cultural experience.

With the rabbit found, the hunting party and its guides in two other 4x4s start shouting, blaring their car horns and driving after the startled animal (neatly defining the word “overkill”).

From one of the vehicles another falcon is quickly released, and it swoops alongside the cars as they careen over the low dunes. The rabbit manages to dodge an impossibly fast dive by the falcon and hides in another bush — only temporarily safe. Yet neither Saeed M. Al Mansoori, one of the visiting Emerati falconers, nor his falcon can catch it even when flushed out a second time. In the end it’s left to young Mohammad and his falcon Marzoom to show the visitors how it is done.

In for the kill

Marzoom is quickly prized off the kill by the distraction of another rabbit carcass, before being tethered and gently picked up by Ali and returned to his son. A gentle spray of water with a diffuser cleans Marzoom’s beak of blood and, Ali says, helps calm him down. The rabbit is placed in a bloodied sack. It’s set for the cooking pot that night when tales of how it was caught — and almost not caught — plus the other hunts of the day are to be served up back at the camp.

It’s a scene that plays out daily between November and February in the vast Al Marzoom Hunting Reserve. Just an hour’s drive from the gleaming towers of urban Abu Dhabi, it’s one of only two areas in the emirate where, for the past five years, falcon owners and curious visitors have had the opportunity to hunt sustainably managed wildlife.

It’s a delicate balance between hunting and conservation, yet the reserve is managed by Abu Dhabi’s Ministry of Climate Change and Environment. Hunting — entwined in the Bedouin heritage of the country — is touted as a form of eco-tourism. Rabbits and indigenous houbara bustards and karawan are either bred on-site or bought from other government-regulated breeders and then released into the desert, where wild animals including deer also roam across 200 square kilometers.

Visitors like Saeed Al Mansoori can choose what prey they want their falcons to catch, each providing different challenges for falcons. The unsuspecting prey are then released in one part of the reserve before being tracked with the help of guides, giving each excursion the semblance of a “proper” hunt. A typical day consists of one hunt early in the morning before the desert heat is too intense and another from late afternoon until dusk.

Last season over 1,300 people visited the reserve, many as family groups and mainly from the UAE and neighboring Gulf states. According to Mohammad Basheer, the genial guest coordinator at the reserve, a typical visit is one to three days, although guests can come for just one morning or afternoon hunt if they prefer.

Overnight stays are spent in one of three pop-up campsites on the reserve. Looking out across the vast sands of Al Dhafra, the vast western region of Abu Dhabi, the camps are well appointed, ranging from the comfortable — sofas, proper beds and hot showers — to the luxurious King Camp, the only one to offer a deep bath-tub with gold-gilt fittings, literally fit for a king. All have the essential campfires for storytelling and cooking of the day’s hunt.

This mix of traditional and modern extends to how visitors can hunt. While many from the Emirates or Saudi Arabia come with their own falcons and in their own 4x4s, there is a garage on site housing classic Land Rovers and Toyota Land Cruisers from the 1950s and ’60s. All are available for rent; a Land Rover comes as complimentary if staying in the King Camp. But for those who not only want to step back in time but return to a pre-modern era, camels can be hired.

“One visitor from the UK was able to ride the camel and hunt with the falcon, it was surprising and impressive,” says Mohammad Basheer.

Owning a falcon, however, isn’t essential for would-be visitors to the reserve. Visitors can go out with Ali and his falcons or other guides and trainers at the reserve and still get the full experience.

While falconry and the birds themselves are revered in Abu Dhabi and the knowledge and skills are still being passed down through families, as with Ali and his son Mohammad, it remains a status hobby with a price tag to match. The most prized birds are the original wild types with pure bloodline, affectionately known as “wahasha” (or “monster”) for their wild, killer instincts. These beasts are hard to find, says Ali, and can easily cost in excess of $30,000. And then there’s the training. It can take from six months to a year to fully train a falcon and the trainers at Al Marzoom, who often have a few falcons each, use remote controlled planes adorned with houbara feathers to teach young birds.

For Al Mansoori it’s been one of his most loved hobbies for more than 13 years; he looks after his falcon as a cherished pet.

“Sometimes I go 12 times [a year to the reserve]. I would like more so I also travel to Morocco, Azerbaijan and Pakistan, too,” he says. “I look after my falcon in my home, sometimes he’s even living in the same room I am sleeping.”

Pot-smoking tourists not welcome in Thailand, says health minister
Please do disturb – why this country with no private paths is a hiker’s paradise
Business travel spending might not return to pre-pandemic levels until 2026
9 of the best scenic hikes in Michigan
Fresh Take: Hunting Invasive Lionfish In Dominica, A $4.5 Billion Chicken Industry Consolidation, And The Moldy Grain Coming Out Of Ukraine’s Black Sea Ports