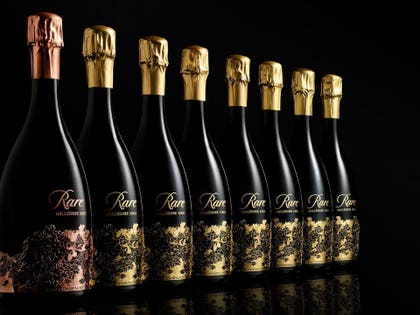 Régis Camus was appointed cellar master of the Champagne house Piper-Heidsieck in 2002 and he quickly became a well-respected figure for his impressive skill of blending over 100 base wines bringing a harmony, generosity and freshness that made it a Champagne that typically over-delivered for the price. Régis has been awarded the title of Sparkling Winemaker of the Year eight times by the International Wine Challenge as well as recently being awarded a Lifetime Achievement Award during the Champagne & Sparkling Wine World Championships. He has even brought an unconventional approach to Piper-Heidsieck’s tête de cuvée Rare Champagne that made it certainly rare among its counterparts and he is part of the reason why so many people in the wine trade make Piper their go-to Champagne as they know how it over-delivers. In 2018, Régis retired as the cellar master of Piper-Heidsieck to focus purely on Rare Champagne marking a move to establish Piper and Rare as separate Champagne houses.

There have only been 11 vintages that have been released over four decades of the Rare Millésime Champagne (including the rosé wines) and the first Rare Rosé Millésime was introduced with the 2007 vintage. Currently, the 2006 Rare Millésime and 2008 Rare Rosé Millésime are the latest vintages to have been released. Régis admitted that it may seem odd to release back to back vintages when it comes to a Champagne only released in years that he deems to be ideal but once he started to see how the 2008s were aging he was impressed by its “aging potential” and intense “freshness and minerality” from this “cooler vintage”. Yet Régis added, “But for me 2008 in my personal opinion is not matured enough to be released right now” and he suggested cellaring it or at least a few bottles. He has not decided on the next Rare Millésime beyond the 2006 yet but he did hint that there might be a 2008 to join the rosé but he needs more time before he makes that decision.

The 2006 Rare Millésime came from a warmer vintage that shows the “generosity of the sun” in Régis’ words that was evident with exotic fruits. He stated that all Rare Millésime wines must have a “balance of fruit, minerality and freshness” yet he liked the contrast of the warmer vintage of the 2006 to the cooler 2008 rosé as they were both siblings when it came to finding the perfect harmony of aromas, flavors and structure yet each had a different way of expressing such equilibrium. But there is another piece of the puzzle that must be considered with the Rare Rosé Millésime and that is the color that is achieved by adding a small amount of red Pinot Noir base wine to create a “copper” hue that “is radiant” even after ten years of aging in the bottle as the wines are not released to market until ten years or after.

The Art of Blending

Régis Camus has always been unconventional when it has come to blending as Piper-Heidsieck typically has a significant amount of Pinot Meunier, ranging from 30-35%, as Régis has noted in the past that the Pinot Meunier gave a generous fruit flavor earlier in life that would be more suited for a non-vintage Champagne and the rest of the blend consists of 50-55% Pinot Noir and 15-20% Chardonnay, always with reserve wines from older vintages added to give more depth. But the Rare Millésime vintage Champagne is meant to be built for great old bones with Régis aiming for it to “still be young in 20 years” and so the blend is usually 70% Chardonnay giving it “minerality” and the tension that comes with high acidity to age and 30% Pinot Noir adding depth of fruit flavor and structure.

But part of that nonconformist spirit of Régis can still be found in Rare with an aim to mainly use Grand Cru and Premier Cru vineyards in Champagne yet he will use a small percentage of non-designated Champagne vineyards if they are excelling in a particular vintage or one is a missing piece of the puzzle that will help him find that balance. He often times uses Chardonnay from the Montagne de Reims sub-region of Champagne despite it being known for its Pinot Noir as the Chardonnay that area produces gives precision and minerality to a final blend.

Régis Camus is truly a wonderful example of keeping the art of blending alive in Champagne as it is all about what the wine consumer will ultimately taste in the glass rather than what sounds good on a piece of paper; that is why, many times, his wines will always do well in blind Champagne tastings as he doesn’t follow a check list to make great Champagne, which may include only Grand Cru vineyards, he seeks out where the greatest fruit is in any given year and sometimes it is in the most unlikely places.