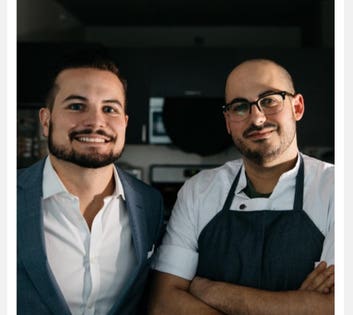 Food trends flew by in a relentless fashion this past year. I drove to Chicago and Canada, flew to New York and New Orleans and explored my own Michigan back yard in search of interesting things to eat.

Sometimes, I discovered good food on the way to and from other food. These are the meals and dishes that stood out to me this year.

Two entire meals. Everyone who had ever eaten at Shaya in New Orleans when it was run by Alon Shaya knew that Zach Engel’s new restaurant in Chicago was going to be a success.

As chef de cuisine at Shaya, Engel took home a stack of awards, including a 30 Under 30 nod from FORBES, and a James Beard Award as rising star chef.

Galit, in Lincoln Park, was as close to a sure thing as I’ve ever seen in the restaurant world.

Engel has an experienced general manager and partner, Andres Clavero, who keeps a eagle eye on the front of the house, and a top team of cooks and beverage professionals who know their way around the city’s food scene.

The first meal I ate there last spring earns a place as one of the best meals I ate during the year. The table that I shared with Chicago breakfast queen Ina Pinckney wound up covered with plates of different types of food.

We had hummus with tahini, sumac and mint, which Engel perfected working for star Philadelphia chef Michael Solomonov as well as Shaya.

That was followed by another hummus, topped with brisket, smoky cinnamon, carrots, tomatoes and braised carrots. There was falafel, wood roasted asparagus with barberries, Balkan stuffed cabbage, and the surprise star of the evening, fried fish Tunisian style.

All of it was accompanied by puffy pitas which became the base for my breakfast the next morning. I’ve since been back to try more dishes, but that first meal resonates.

The other meal I found just as memorable was at Luvi, an Asian inspired restaurant in New Orleans. It was so beautifully plated that I felt like I was back in Tokyo, and the food could easily be served in Hong Kong or Singapore.

One discovery was Luvi’s black sesame ice cneam, which prompted me to look for black sesame elsewhere, and led to my story about the black sesame flavor trend.

Fusion tacos. In July, I was back in Chicago to attend my first Cubs game and a fundraiser. Engel teamed up with legendary chef Rick Bayless for a benefit Mexi-Med collaboration in one of Bayless’ newest places, Bar Sotano.

One of their dishes was a taco that married Galit’s falafel with roasted tomatillo salsa and fresh herb and pickled vegetable garnishes.

I don’t know if that taco will see the light of day again, but I’d love it if one of the chefs would put it on their menu.

In the meantime, you can sample imaginative cooking from Rishi Manoj Kumar, the chef de cuisine at Bar Sotano.

I also discovered some delicious fusion tacos in my own Ann Arbor backyard. For years, I’ve driven by Eat, but I never stopped in until someone mentioned that they made good pie.

They do, but they also have a wonderful taco special. The chicken mole tacos at EAT include shredded chicken in mole sauce, Brussels sprouts and a beet salsa. Yes, beet! I always think I can’t eat all three, and then I polish them off.

A backroom discovery. I’m almost afraid to write about Dearborn Meat Market, near Detroit, because there aren’t a lot of tables in its back room and you may not appreciate its minimal approach.

But every place can use business, and everybody loves a bargain. The market sells Halal beef and chicken by the skewer, along with a small selection of Middle Eastern salads and hummus.

You choose how many skewers you would like and then head into the back room. Your skewers are cooked over an open hearth that stretches along an entire wall.

At your seat is a package of pita bread, and your grilled meat is delivered along with roasted tomato, onion and pepper. You assemble this into a sandwich, or eat it plain with the salads as an accompaniment.

Lunch with a drink will maybe cost you $10, and you’ll be waiting for the next opportunity to go back.

It’s a coffee shop whose owner, Ibrahim Alhashbani, imports beans from his family’s farm in his native Yemen, and the lineup of beverages is excellent.

While you can get fully leaded choices, my favorite is on the milder side. It’s called qishr, and it’s brewed from coffee husks and spices, that are boiled together and then strained into a teapot.

There’s no caffeine, since it involves husks, not beans. You can add sugar, although you won’t really need it. There’s nothing more comforting than a pot of qishr and a slice of sabaya, a flaky pastry topped with honey that’s made for Qahwah House.

The shop is becoming so popular that it’s hard to find a seat, and it’s turning out to be a hit on the campaign trail, too. The day after my last visit, Bernie Sanders stopped by to meet with local activists.

Canadian pie. Every time I cross the border into Canada, I feel at home. It’s partly because I have Canadian ancestry, but also because Canada is a place with delicious food.

When America was awash in non-fat milk and margarine, Canada stayed true to cream and butter. It didn’t have to discover cakes and pastry via the Great British Baking Show; it has its own baking show and baking traditions.

Every time I get the chance, I swing by Parks Blueberries in Bothwell, Ontario, a short hop off Highway 401 between London and Windsor.

In September, I drove to Canada to try the McDonald’s P.L.T., its effort at a plant-based burger. This was a big year for the plant-based trend, and McDonald’s backed into it by this limited test.

The burger itself wasn’t all that memorable, but the pie I ate at Parks on the way home was.

Along with pick-your-own blueberries, a sprawling gift shop and cases of frozen dishes, Parks has a cafe. There’s always pie, and their raspberry custard pie was one of the best slices I’ve ever eaten.

The raspberries were mixed in with the custard under a crumbling topping, and baked in an excellent flaky crust.

I highly recommend that you take home some baked goods. I filled up a box with muffins, scones and biscuits, placed them in my freezer and discovered them in November when I was looking for something else.

It was like an Advent calendar of baking, diving in each day and pulling out a treat. Parks also sells individual sized frozen pies, so if you like pumpkin and no one else does, you can have your own without having to share.

If you are traveling through Windsor, Ontario, on the way to Detroit, be sure to stop at the new outpost of Anchor Coffee in the Devonshire Mall. They’ll sell you a beverage to go with your Parks goodies (try the Cortado). And if you need one more fix of dessert, they have lots of their own in-house baked sweets, too.

The 7 most scenic road trips in Switzerland
Famous Super Tuscan Wine Producer Brings Tuscany To New York City While Displaying Age-Worthy Quality Through Verticals
10 unmissable experiences in South Korea, from cherry blossoms to bar hopping
The world’s most alarming airplane landings
Ford, Tesla And Netflix Are Among The Best-Performing Stocks During This Summer’s Massive Rally