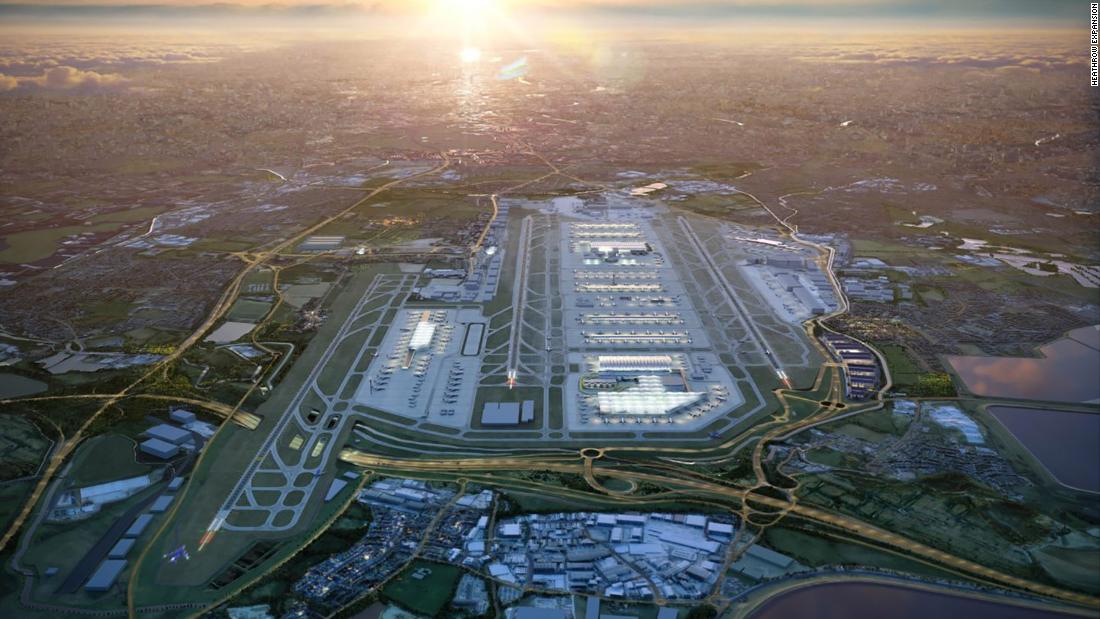 Judges in the closely-watched case at London’s Court of Appeal said the UK government, which threw its support behind the proposal, had failed to take into account what impact the move would have on Britain’s commitments under the Paris Agreement.

The decision could scupper plans to expand one of the world’s busiest airports, and was celebrated on the court’s steps on Thursday by a number of climate groups that had brought the legal action against the UK’s Transport Secretary.

The court did not rule on the legality of a third runway itself, and Heathrow said it would appeal at the Supreme Court — but the British government said it would not contest the verdict.

The ultimate decision over whether to fight for a third runway lies with Prime Minister Boris Johnson, who has long opposed the idea and once said he would “lie down in front of the bulldozers” to stop it going ahead.

“We have not found that a national policy statement supporting this project is necessarily incompatible with the United Kingdom’s commitment to reducing carbon emissions and mitigating climate change under the Paris Agreement, or with any other policy the Government may adopt or international obligation it may undertake,” the judges wrote in their ruling.

The accord pushes signatories to reduce their carbon output and halt global warming below 2C by the end of the century.

London’s mayor, Sadiq Khan, had supported the legal action and welcomed the decision on Thursday. “We won!” Khan tweeted after the ruling. “A new runway at Heathrow would have serious consequences on climate change, on air quality, on noise pollution, on road and rail networks and on the quality of life in our city,” he added in a statement.

Campaigners celebrate the ruling on Thursday.

The move marks a new period of uncertainty in the lengthy and controversial debate over whether to build a third runway at the site — which would have made Heathrow the world’s busiest airport by current statistics.

After the verdict, the UK’s Transport Secretary Grant Shapps said the government will look elsewhere in exploring expansion and would not fight the decision.

“Airport expansion is core to boosting global connectivity. We also take seriously our commitment to the environment. This Govt won’t appeal today’s judgement given our manifesto makes clear any #Heathrow expansion will be industry led,” he wrote on Twitter.

However, a statement from Heathrow Airport said the issue identified by the court is “eminently fixable.”

“We will appeal to the Supreme Court on this one issue and are confident that we will be successful. In the meantime, we are ready to work with the Government to fix the issue that the court has raised,” the airport’s spokesperson said in a statement.

The new airstrip would cross over the M25 motorway, London’s busy and regularly congested outer ring road. About 750 homes in the villages of Longford, Sipson and Harmondsworth could be flattened to make way.

Johnson opposed the runway while he was Mayor of London — should he decide to accept the court’s judgment now, plans to build the airstrip would likely be doomed.

‘This has wider implications’

Thursday’s case was brought to the court by groups including Friends of the Earth, which described Thursday’s ruling as “an absolutely ground-breaking result for climate justice” — and climate groups seized on the decision as a sign of rapidly shifting attitudes towards the climate.

“This judgment has exciting wider implications for keeping climate change at the heart of all planning decisions,” Will Rundle, head of legal at Friends of the Earth, said in a statement. “It’s time for developers and public authorities to be held to account when it comes to the climate impact of their damaging developments.”

“It would have been hard to imagine this outcome even a couple of years ago,” added Tim Crosland, director of the Plan B. Earth, which was involved in the case. “But as the scale and impacts of the ecological crisis become clearer, with people dying and being displaced in the UK and around the world, it’s vital we reject the politics of division and unite amidst adversity.”

The move was also hailed by Extinction Rebellion, whose frequent protests in London and around the world have become a notable feature of the growing climate movement.

And legal experts said the decision could be replicated around the world, as governments battle tensions between economic agendas with concerns over man-made damage to the climate.

“The last year has seen a surge in litigation across the globe associated with the effects and risks of climate change,” Mary Anne Roff, a partner at the London law firm Clyde & Company, said in remarks sent to CNN.

“The Court of Appeal made clear that they have not decided that there will be no third runway at Heathrow. Nor have they decided that a national policy statement supporting this project is necessarily incompatible with the UK’s commitment to reducing carbon emissions and mitigating climate change,” she added.

“But their insistence on the Government complying with its commitment to the provisions of the Paris Agreement underlines the continuing and increasing importance that those involved with the planning, construction and operation of infrastructure and other major projects must take climate change into account.”

CNN’s Samantha Tapfumaneyi and Simon Cullen contributed to this report.

Tavola Villa: Adding âRelaxedâ to Luxury in Fiji
The best lakes in the US you’ve probably never heard of and how to visit in 2022
FDA: Vidalia Onion Recall Due To Listeria Concerns Affects Wegmans, Publix, 5 States
Hike, paddle and climb your way around the best of Grand Teton National Park
The 14 best ways to get to know Melbourne