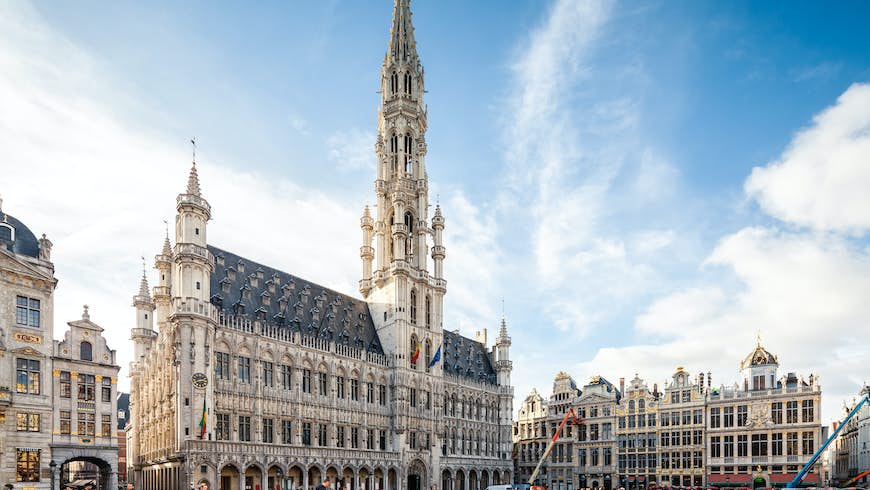 Belgium often gets overlooked by travelers for neighbors like France and the Netherlands, but it’s one of Europe’s best kept secrets. Because of its history, Belgium is linguistically and culturally diverse; small in size, the country is compact, allowing visitors to travel to multiple destinations with ease.

From perfected delicacies like fries and chocolate to accessible nature breaks, and picturesque medieval towns to trendsetting art scenes, there is truly something for everyone to experience in Belgium. Here are the best places to visit.

Brussels, the capital of Belgium and the seat of the European Union and NATO, is one of Europe’s most multicultural cities. Art lovers can spend a whole day visiting the Royal Museum of Fine Arts of Belgium – it’s made up of six different museums, including the must-visit Magritte Museum, the Boghossian Foundation at Villa Empain, a stunning art deco edifice, and the modern-chic Center for Fine Arts, a multipurpose cultural venue commonly referred to as BOZAR.

The city is filled with many architectural masterpieces, such as the Grand Place, a Unesco World Cultural Heritage site, and the illustrious Maison Cauchie, which is open to the public only on the first weekend of the month with advance reservations.

You can find some of the world’s best and most affordable vintage shopping at the Brussels flea markets, most notably the daily open-air antique market in Place du Jeu-de-Balle, and the shops in the Sablon district.

Read more: 13 classic experiences to have in Brussels

For food lovers, Brussels is the place to taste all of Belgium’s culinary highlights. Délirium Café is a beloved always-crowded bar with more than 2000 types of beer, including the country’s famed Trappist beers. Nearby, there are a handful of outdoor kiosks, known as frietkot (snack stands), where you can get your frieten fix – fries served in an iconic paper cone with your sauce of choice. To satisfy a sweet tooth, try Belgian chocolate at Pierre Marcolini and, of course, the fluffy Brussels-style waffles at Maison Dandoy.

Best for wandering and romantic escapes

A visit to Bruges feels like stepping into a fairytale. Often called the Venice of the North, the city is incredibly charming, with its intricate network of tree-lined canals, cobblestone streets and well-preserved buildings. To add to the allure, much of the distinctively medieval architecture looks like gingerbread houses, thanks to the red Gothic brick. All that and the fact that it’s the birthplace of Flemish Primitive painting helped designate the entire historic city center of Bruges as a Unesco World Heritage Site.

Bruges is best experienced at a leisurely pace. Wander around Old Town on foot, soaking in the city squares, the Markt and the Burg; hop on a canal boat tour and count all the bridges (54 in total), and then bike along the canals to the less crowded places. For the best bird’s-eye views, head to the Belfort, one of Bruges’ most recognizable landmarks, and climb up 366 steps to the top.

Read more: 17 of the best things to do in Bruges, from boats and bikes to beers and breweries

Catch your breath with a crisp Belgian beer, which can easily be found on every corner of the city. Noteworthy beer destinations are De Halve Maan, a 16th-century brewery that also offers brewery tours with tastings, and ‘t Brugs Beertje, a legendary beerhouse with more than 300 Belgian brews on the menu.

Last but not least, no visit to Bruges is complete without a visit to the Groeningemuseum, a fine-art museum with an impressive Flemish Primitive collection.

Get trusted guidance to the world’s most breathtaking experiences delivered to your inbox weekly with our email newsletter.

Known as the “Land of Valleys,” the land-locked province of Namur in the Wallonia region is surrounded by nature – rivers, cliffs, rolling farm hills and lush Belgian Ardennes greenery.

With postcard-perfect aesthetics and a mighty citadel perched atop limestone cliffs, Dinant is the perfect day-trip destination. Stroll around the scenic riverside town, cruise along the river, ride the cable car up to the fortress to take in the sweeping views and enjoy the scenery from a cafe while tasting the regional specialties, like the Couque de Dinant, an extremely hard honey-flavored biscuit that comes in various shapes. Made only of equal parts wheat flour and honey, they can be kept indefinitely, making them great souvenirs to take back home.

For a once-in-a-lifetime culinary experience, head to Liernu, an even smaller town that’s the epitome of tranquility. On 12 acres of private garden, you’ll find L’air du Temps, a fine-dining restaurant in a beautifully renovated farmhouse. Some 80% of the dishes served here are sourced from the onsite garden and often feature highlights of the local terroir, like Wallonia’s most sustainable food source, the Petits Gris de Namur snails.

From there, you’re a stone’s throw from the city of Namur, the capital of both the province and the region. This relaxed city is home to one of Europe’s largest citadels and also the adults-only Musée Félicien Rops, which exhibits the life and work of the scandalous 19th-century Belgian artist. It’s the best place to start your adventure into the Belgian Ardennes forests.

Best for fashion and design

Home to the world-renowned Royal Academy of Fine Arts Antwerp, Belgium’s second city is also its coolest. Some of fashion’s top creatives, including Martin Margiela and Balenciaga’s Demna Gvasalia, have roots in Antwerp, and a few have gone on to open unique shops worth a visit, such as Dries Van Noten’s Het Modepaleis and Ann Demeulemeester’s sleek, black-and-bone-white flagship store.

There are more trendy shops in the Kammenstraat and Nationalestraat areas making up the Fashion District. Here you can also find the impressive Fashion Museum Antwerp (MoMu; reopening September 2022).

Beyond its stylish inhabitants, the city has a visual edge driven by its contrasting architectural styles. The more recent contemporary projects have joined the medieval buildings, contributing to Antwerp’s rich landscape. Make your way down to the port to marvel at architect Zaha Hadid’s Antwerp Port House, as well as the MAS, home to exhibitions and collections revolving around the city of Antwerp.

The white, sandy Belgian coast stretches 65km (40 miles) long, meaning you can pack multiple unique towns into a visit without feeling overwhelmed. There’s even de Kusttram, a public coastal tram and one of the longest trams in the world – it starts near the French border at De Panne and travels all the way down to Knokke-Heist, near the Dutch border, making 68 stops in total. The complete journey takes 2.5 hours and allows you to admire the coastline in its entirety from the comfort of your seat.

The two must-visit stops are De Haan and Oostduinkerke. De Haan is unlike the rest in that all buildings must be under five floors, helping to preserve the original small-village charm. With a low beachfront skyline made up of Belle Epoque architecture and unspoiled grassy dunes, it’s love at first sight for many. Still not convinced? The sweet treats at the retro Wafelhuis Annie or high tea at the vintage ‘t Stil Genot tea room are sure to win you over.

Read more: 10 of Europe’s most beautiful beaches to explore in 2022

Oostduinkerke, or East Dunkirk, is a protected dune area, and the only place in the world where shrimpers still use horses to drag nets to collect tiny gray shrimp on the sand. This near-extinct centuries-old tradition is practiced by just over a dozen highly trained locals, and takes place at low tide during the warmer months, usually between April and October.In 2013, shrimp fishing on horseback in Oostduinkerke received Unesco’s Intangible Cultural Heritage of Humanity status. To learn more about this and the other local sea traditions, visit Navigo, a national museum housed in a 19th-century fisher’s cottage.

Best for a quirky weekend getaway

Located between Brussels and Bruges, Ghent features the best of Belgian cities: winding canals, medieval architecture, enviable museums and cobblestone alleyways filled with shops and restaurants. The difference is that Ghent is home to the largest student population in Belgium — a young, beating heart in one of the country’s oldest urban areas.

Take a closer look and you’ll find an unconventional creative community, a flourishing music scene and enough drool-worthy plant-oriented menu options to help crown the city the Vegetarian Capital of Europe. Not only that, one day a week, more than half the inhabitants and some 120 restaurants participate in Donderdag Veggiedag, or Thursday Veggie Day, an initiative that encourages omnivores to go meat- and fish-free for 24 hours.

Since 2009, Ghent has proudly held the title of Unesco Creative City of Music, there’s a wide range of options for everyone’s tastes, from Belgium’s first silent disco at Abacho to performances at the never boring Vooruit Art Center, and from classical performances at De Bijloke Muziekcentrum to live music on the street and in bars and cafes, like Kinky Star, a local record-label-owned cafe famous for its Irish coffees and alternative concerts.

Spas around the world take their name from this peaceful and breathtaking Belgian town. Designated a Unesco World Heritage Site in 2021 as one of the “​​Great Spa Towns of Europe,” Spa is a small town in the Ardennes known for its healing thermal springs and slightly sparkling mineral water source. The most famous spa in Spa is Thermes de Spa, a modern and surprisingly affordable complex with more than 150 years of knowledge and tradition, nestled up in the hills. With the stunning natural landscape as your backdrop, resting and relaxing feels easy here.

Read more: Where to find 20 of Europe’s most stunning hot springs

A former coal-mining site, Hoge Kempen National Park is the first and only national park in Belgium, opened in 2006 as a result of the cooperative conservation efforts of businesses, government agencies and environmental organizations.

The 5700-hectare (14,085-acre) nature reserve is mostly heathland and pine forest, a lush landscape of evergreen trees – and in August and September, vibrant purple-flowering shrubs – next to expansive artificial waterways. Today, it’s inhabited by more than 6,000 species of flora and fauna, which is especially impressive considering the area’s industrial history.

There are five main gateways that serve as entrances into the park. For those who don’t have a car, the park can only be easily accessed through the Kattevennen Gateway, first by taking a train to Genk station, then by a De Lijn bus ride or a short walk. Once inside, the park has different routes for the different ways the park can be experienced: on foot, bicycle, mountain bike, or horseback. Admission is always free, and the park is open all year long. Rangers offer guided experiences for all ages on the first and third Sunday of the month with advance registration.

You might also like:
Camp in these incredible suspended teardrop tents in Belgium
5 best neighborhoods to get a feel for Brussels
The 10 best day trips from Brussels: castles, cool cities and culture

The great unrest: How 2020 changed the economy in ways we can’t understand yet
How to explore the lavender fields of France (and things to do when they’re not in bloom)
Why Opopop Believes They Can Reinvent Popcorn
With domestic fares down 25% since spring, now’s the time to book flights for fall trips, travel app study finds
How to spend a weekend in Venice