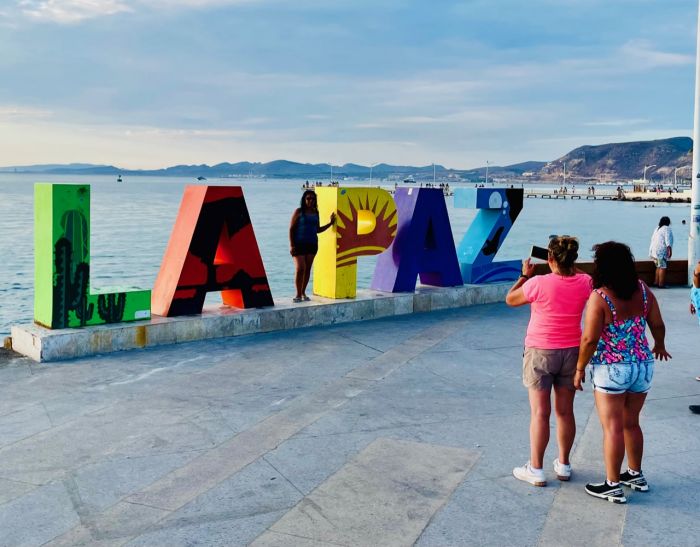 One of the most captivating destinations on the eastern side of Baja California Sur is the city of La Paz. It’s about a two hour drive north of San Jose del Cabo and less than a one hour drive from the artisan community of Todos Santos.

La Paz in English means ‘Peace’, and this area is known as one of the most scenic fishing and watersport destinations in the world. French marine biologist Jacques Cousteau named it “the world’s aquarium.”

From October through April, locals and visitors have the opportunity to swim near whale sharks. Known as the largest fish in the world, these big mouth giants are peaceful and gentle souls. 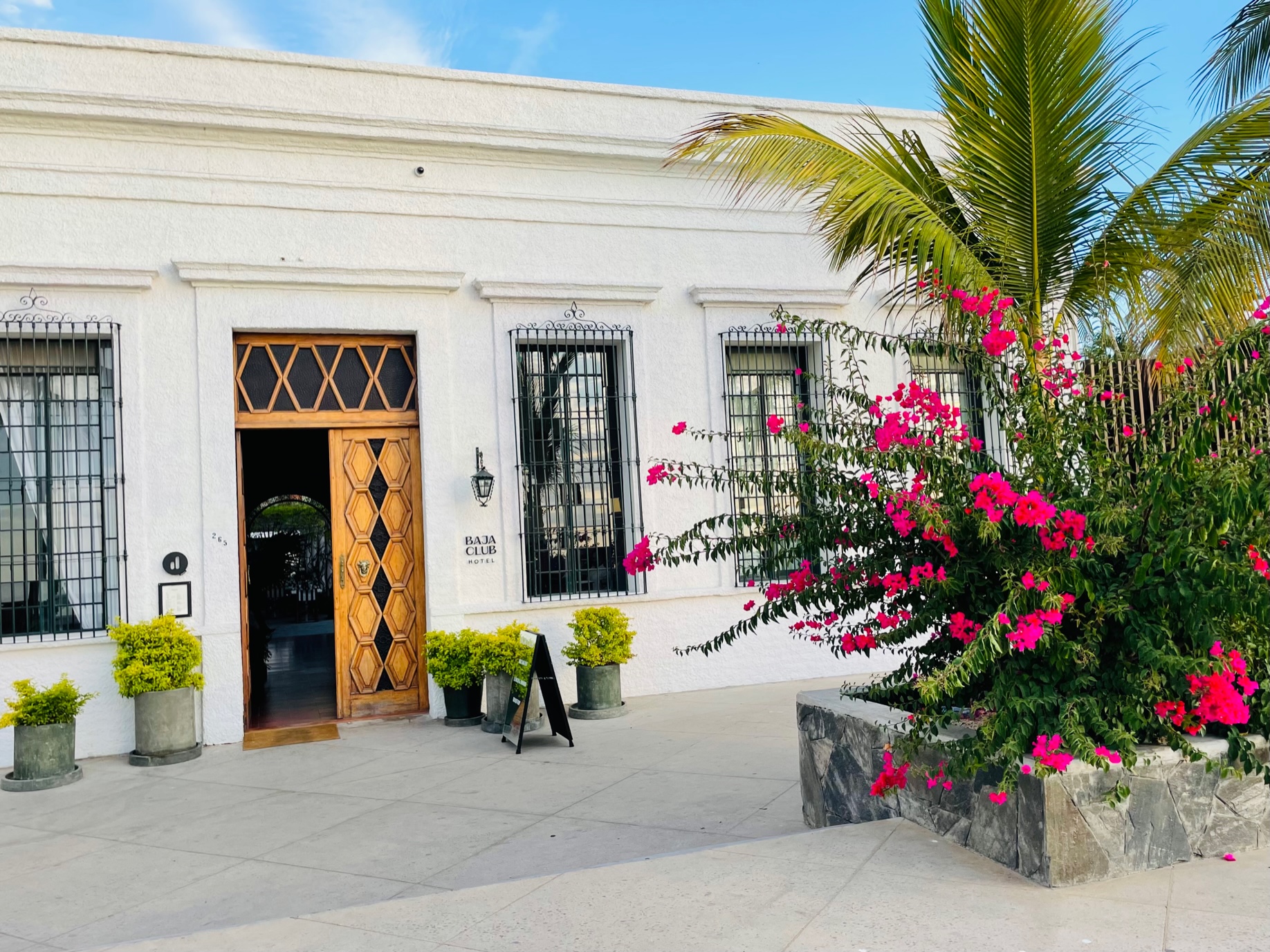 One of the most luxurious properties to stay at while exploring La Paz is the boutique Baja Club Hotel. Hospitality developers Grupo Habita and Mexico City-based architect Max von Werz preserved this iconic colonial hacienda and added a new modern extension.

The exterior of this 1910 villa is painted the same color as a pearl to pay homage to the wealthy pearl farming family that once resided here.

Beyond the front door, the original exposed brick walls were kept to uphold the beauty of the building located in La Paz’s historic district. 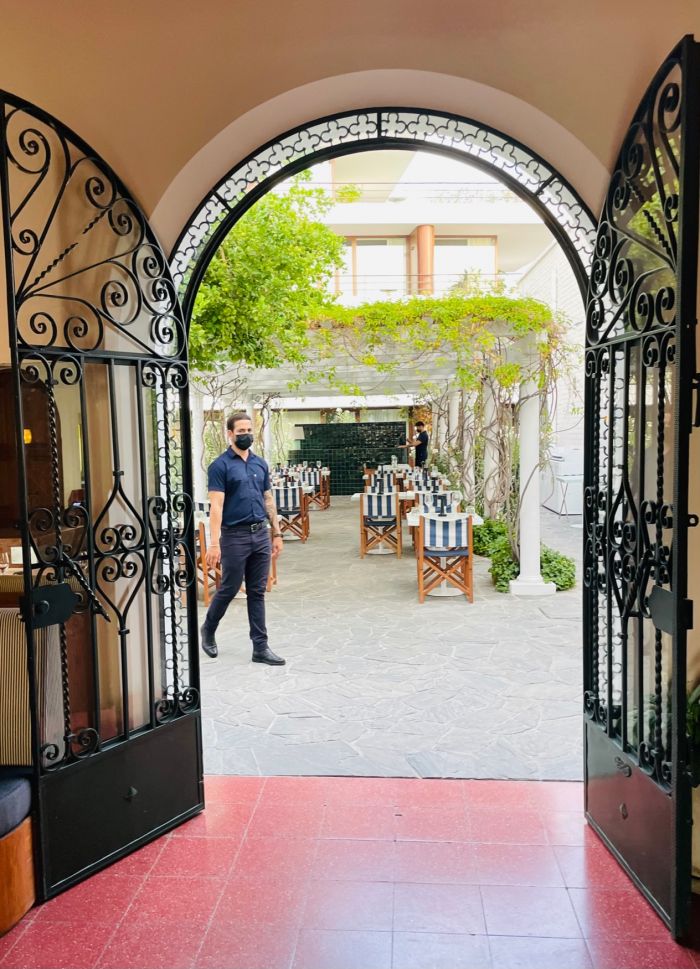 The ground floor remodel features a reception area with a small boutique. There is a lobby bar and cafe, and library. The garden courtyard offers peaceful sitting areas, a water feature, and freestanding chimineas lit in the evening. 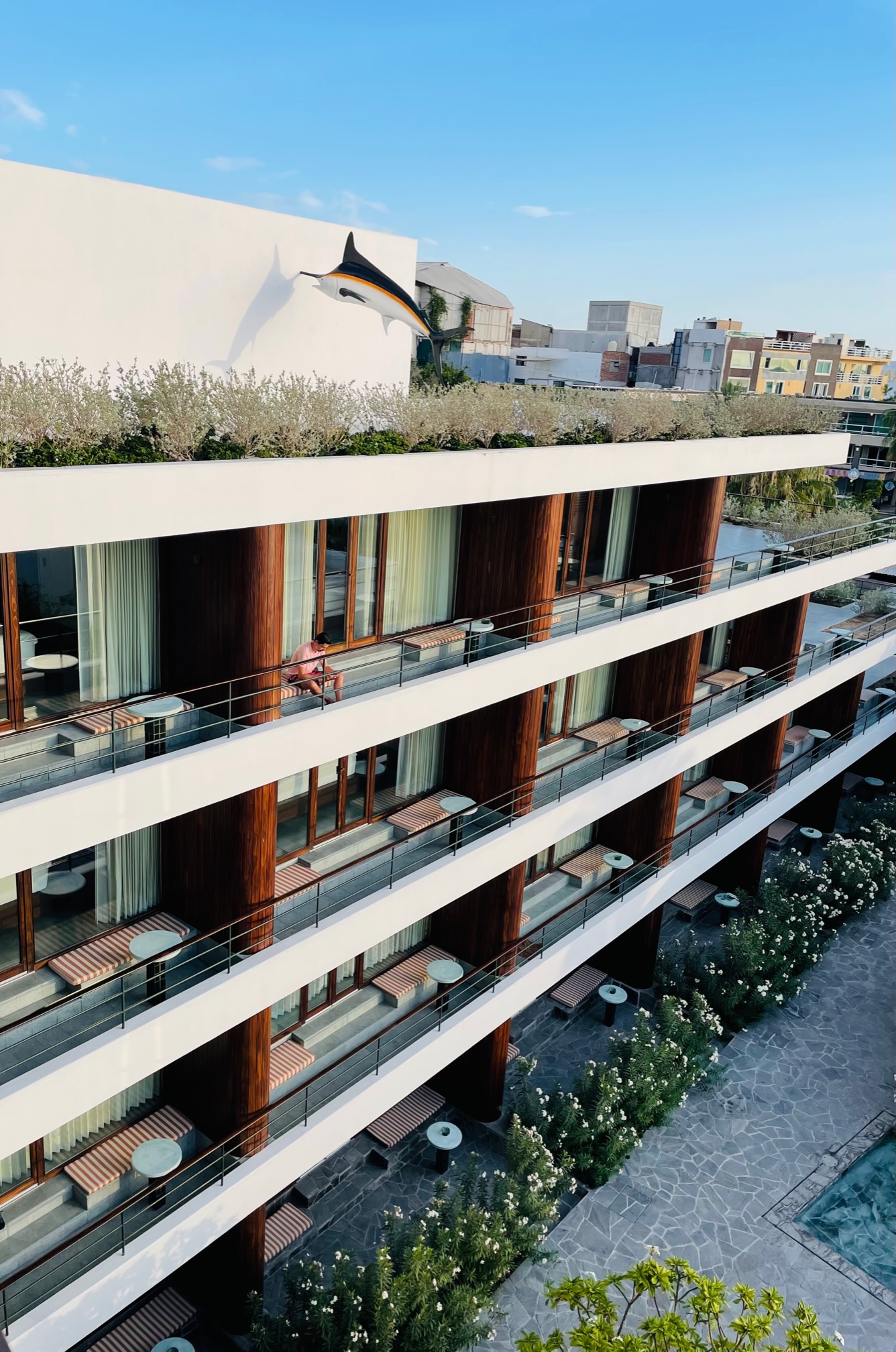 Beyond the open courtyard garden is the new four-story addition with a striking von Werz designed free-form, spiral staircase that leads guests up to their room or suite. Each room has it’s own balcony with garden, courtyard and ocean views.

The clean lines of the exterior resemble that of a cruise ship. A touch of whimsy is a large marlin fish piercing a wall at the top floor, as an homage to the marine life in the Sea of Cortez across the street. 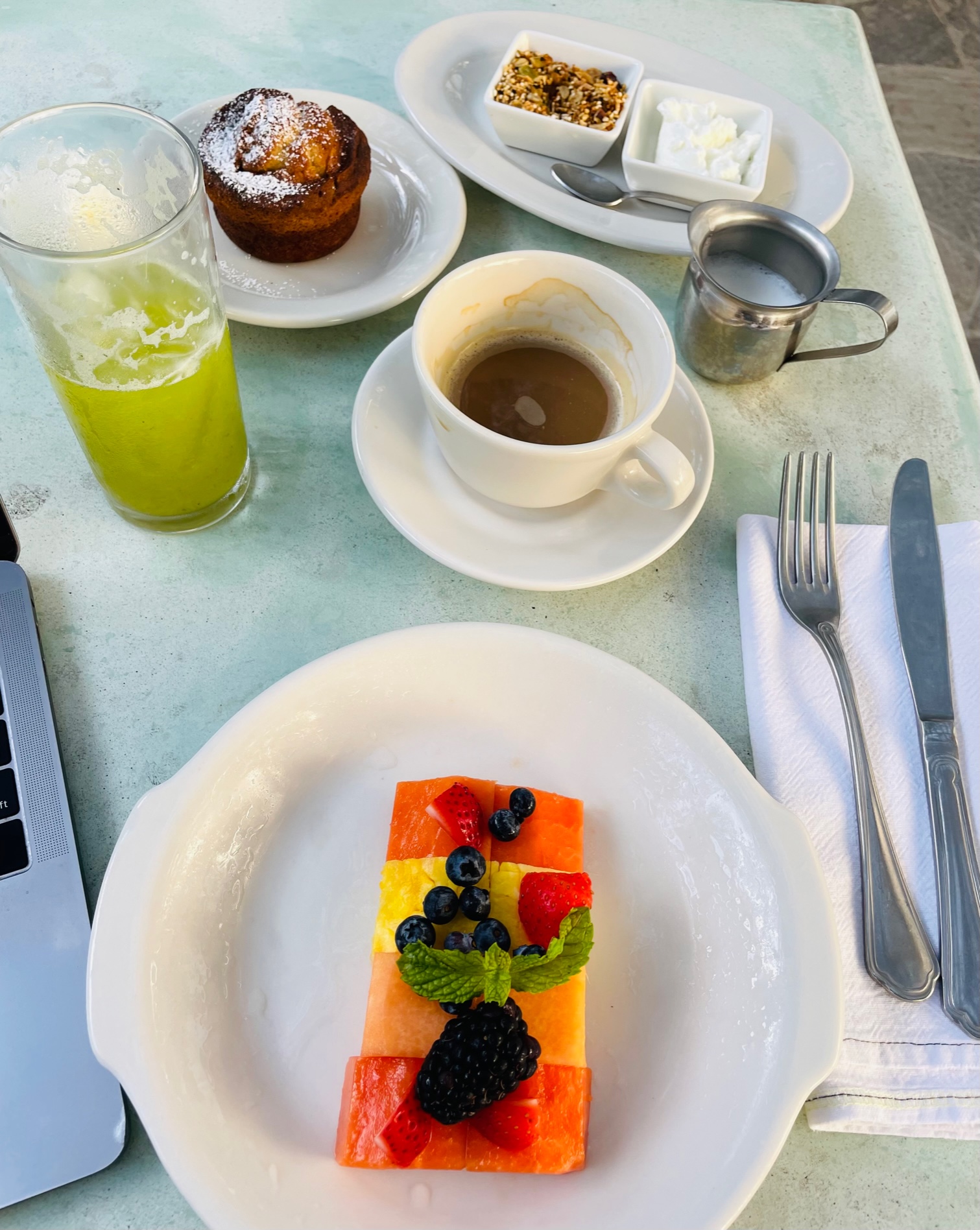 Every morning, vacationers gather at the outdoor terrace garden for a complimentary al fresco breakfast. Guests have a choice of juice, coffee or tea, banana bread, fruit plate, yogurt and granola.

Dinner menu items may include Saganaki, a fried cheese appetizer with lemon and honey, a Greek salad, Chicken Souvlaki with pita bread and french fries,a large pork chop with scallop potatoes, Baja Club burger or catch of the day. 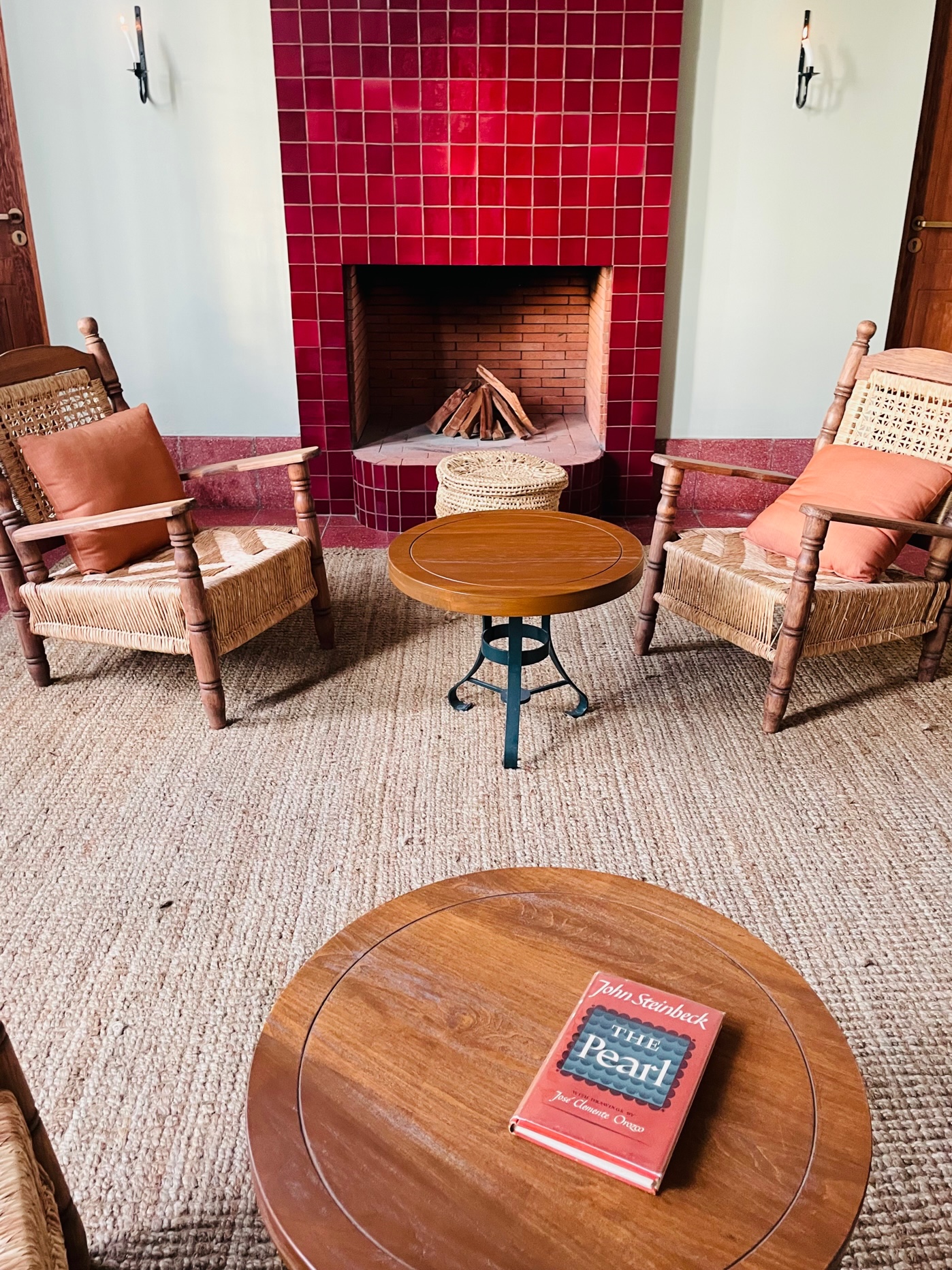 Besides a collection of books lined on shelves in the cozy fireplace library, there is also a copy of John Steinbeck’s The Pearl, to honor the former family home. 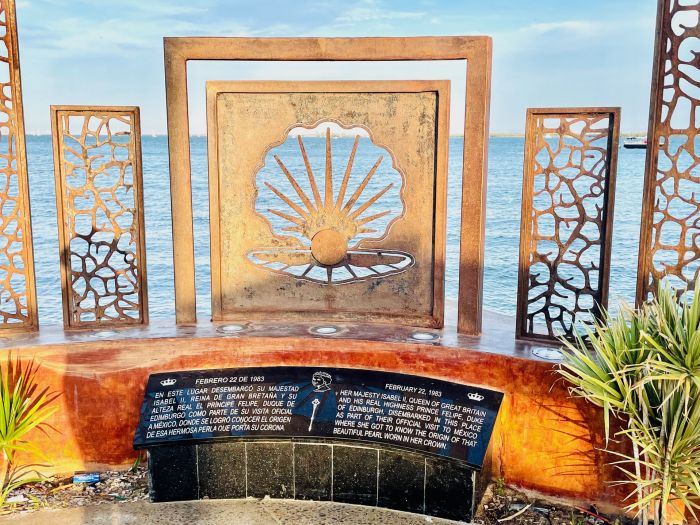 Fun La Paz activities include a self-guided walking tour along the seafront Malecón promenade to discover an array of colorful art and monuments. One monument that ties into the pearl reference at Baja Club Hotel is a dedication to Her Royal Majesty Queen Elizabeth.

She visited La Paz in 1983 with Prince Philip, Duke of Edinburgh during their travels along Baja California Sur onboard the royal yacht, Brittania. They disembarked in La Paz to learn about the origin of the beautiful large pearl she wears on her crown.

Stories have been told that in 1883, La Paz was known for its beautiful pearls, and a gigantic mother pearl oyster was discovered with a pearl the size and shape of a small lemon.

The pearl was named ‘La Perla de La Paz,’ and eventually was given to the royal family and placed into a crown for the Queen of England. 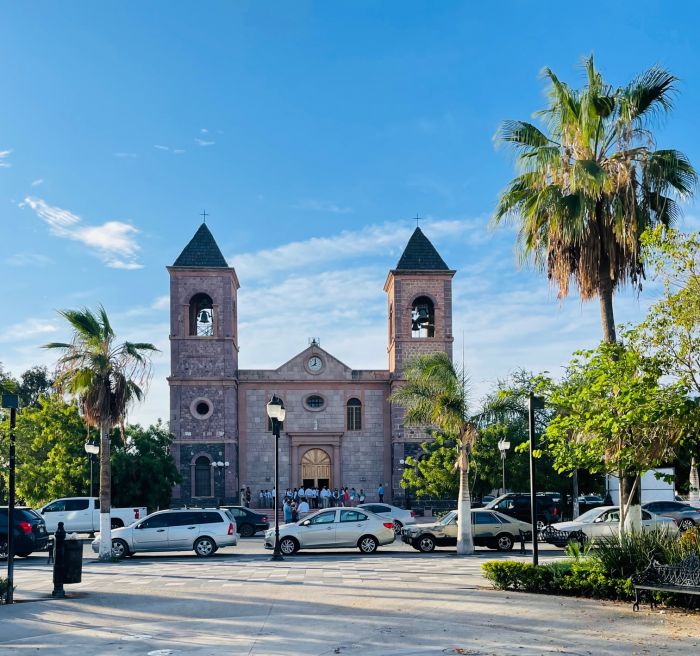 Also within walking distance from the Malecon and Baja Club Hotel, is The Lady of Peace Cathedral in La Paz. The building of this church was started in 1861 by Bishop Juan Escalante y Moreno. This neoclassical design has a striking facade and two towers.

Bells chime often and can be heard throughout the city. Inside the church is a striking baroque altarpiece from an 18th century mission that was abandoned. 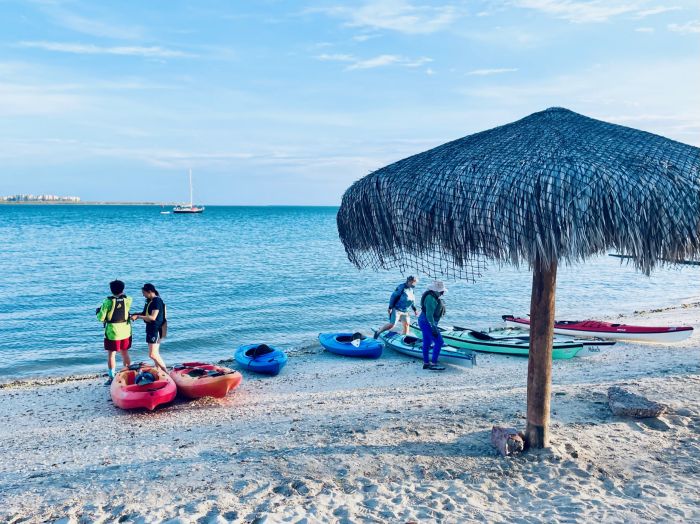 Looking out at the aquamarine colored waters, it changes from Robin egg blue to turquoise to slate gray depending on the location and sunshine in La Paz.

During the summer months when the temperature heats up to 100 degrees, snorkeling, paddle boarding, kayaking and boating are some of the best options to stay cool during the day.

This area in the Sea of Cortez is home to a vast amount of marine life and fauna. Approximately 80% of marine species around the globe and a vast ecosystem for many types of mollusks, including oysters and clams can be found in La Paz. 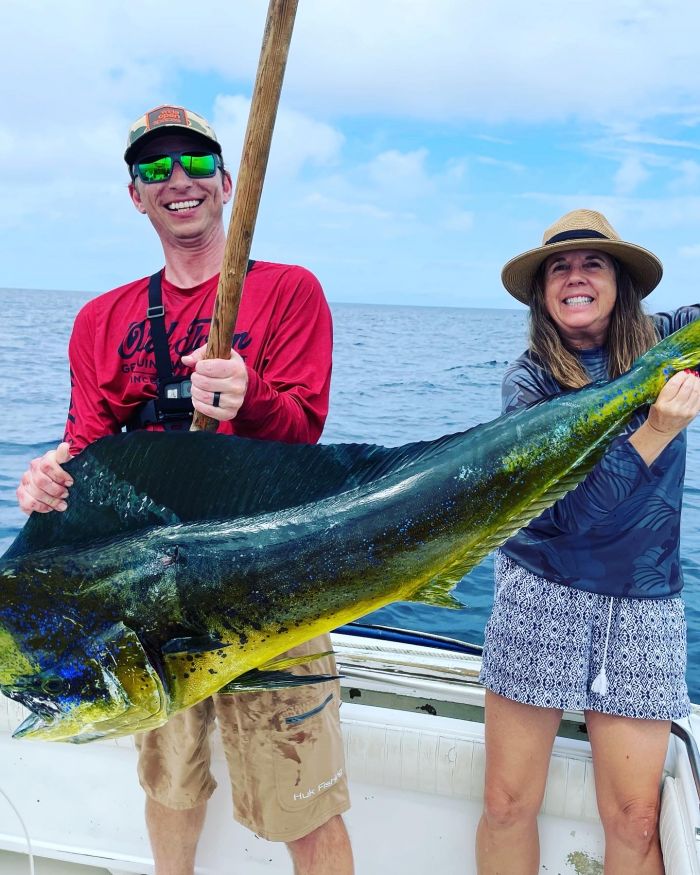 The water and islands around La Paz are teeming with a variety of fish. Recently, the city hosted a ‘Fishing in La Paz’, the first of ‘Five in the City’ 2022-2023 tournaments.

This event brought more than 167 fishing boats to the marina, because the fertile waters around the southern tip of the Baja peninsula are home to some of the most prized gamefish in the world.

More than 60 fishing tournaments will take place in the five municipalities of Baja California Sur. The final tournament will be in Loreto in August, 2023. 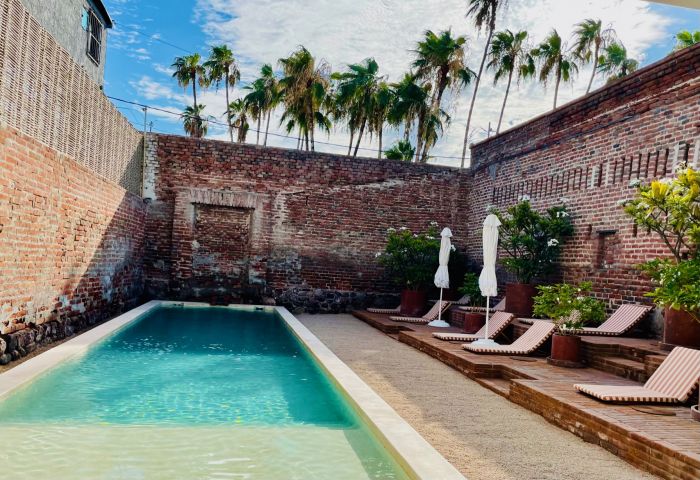 After a day of sightseeing, relax back at the Baja Club Hotel swimming pool surrounded by the original brick wall. The colors in the pool reflect the different blue hues in the bay across the street.

Bar service is available at the pool for guests cooling off in the warm water or sitting on one of the low lounge chairs under shade umbrellas.

This content was created by travellingbase.com. If you see this on another site, it has been stolen. 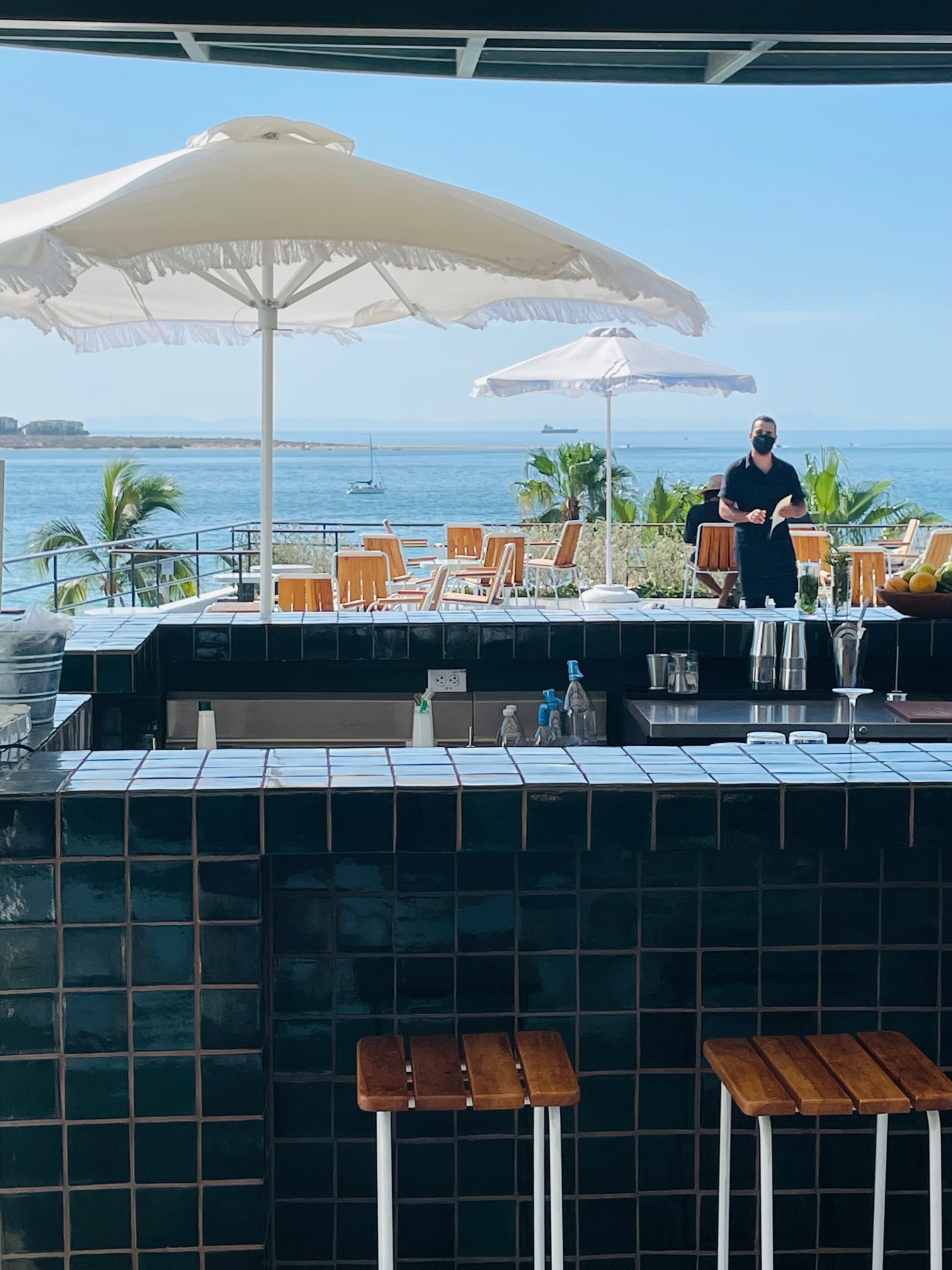 The rooftop bar at Baja Club Hotel offers direct views of the Sea of Cortez. Starting at 5 p.m., guests can order a margarita, Modelo beer or cocktail at the well-appointed lounge in time to watch the sun set into the Sea of Cortez.

For those who have been to Cabo San Lucas, visit the more peaceful, historical La Paz next time you plan a Baja California Sur getaway.

Additional information is here at the La Paz Tourism Bureau.